With my new Crock Pot, I knew I could replicate this simmering deliciousness just in time for V-Day; and with sticky toffee puddings for dessert, my menu was set 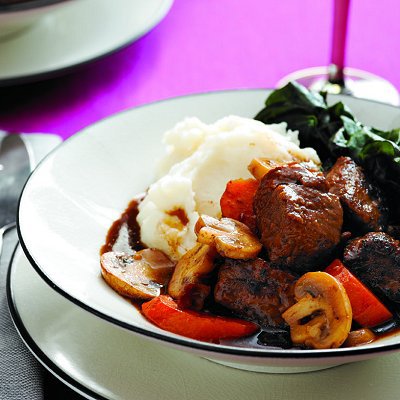 Beef bourguignon is one of those dishes…when it’s made well, oh my: romance of the gastronomical variety. To me it’s also a dish synonymous with kitchen success, a la Julia Child. However, I don’t own a Le Creuset nor do I have time for a complicated 10-step recipe. But with my new Crock Pot, I knew I could replicate the simmering deliciousness just in time for Valentine’s Day, thanks to Chatelaine’s slow-cooker beef bourguignon.

Now because chef-in-training will be away on cupid’s actual holiday, we celebrated early. I planned beef bourguignon with a side of chive and red-skinned mashed potatoes, and this sticky toffee pudding with caramel sauce recipe for dessert – nothing says romance to chef-in-training like a hearty meat dish chased with caramel. And nothing says romance to me like a meal cooked with very little effort.

I had heard that getting good beef is key, so I went to my local butcher for the two plus pounds of stewing beef, which for the record is a whole lot of meat. Now the only thing I still can’t get used to with the slow cooker is the fact that everything takes many, many hours to cook. Yes, I know that’s the benefit of the cooker, but it messes with my planning. So 15 minutes before I had to leave for the afternoon I remembered I had to assemble everything (insert expletive). Luckily, 15 minutes were all I needed thanks to this quick and easy recipe.

You pat the beef with paper towel to remove extra moisture and then throw it in the slow cooker insert. Add the sliced mushrooms, carrots, garlic, onion, and sprinkle everything with flour and thyme, then stir it all to get the ingredients coated. Add the bay leaves, broth and wine, and that’s it. I even had time to wash the dishes before I had to head out.

The dish is cooked on low for about 8 hours. During the last 15 minutes of cooking you fry the bacon until crispy, crumble it, then add it to the bourguignon. The potatoes were a nice side, and I imagine a crusty loaf of French bread would also have been perfect. The sauce wasn’t as thick as I was expecting, but found out later it’s due to the slow cooker because no liquid evaporates during cooking. Regardless, it was a rich, hearty, and tasty dinner, paired nicely with a glass of expensive red wine, which of course I had to open for the recipe. While I think the mini sous chef would have enjoyed this meal, particularly the gooey caramel dessert, this one goes in the “couples only” recipe card index.

And because this dish is so low-maintenance it leaves plenty of time for, well, whatever else you have on your Valentine’s Day agenda…