BBQ ribs: A make-ahead meal for the long weekend 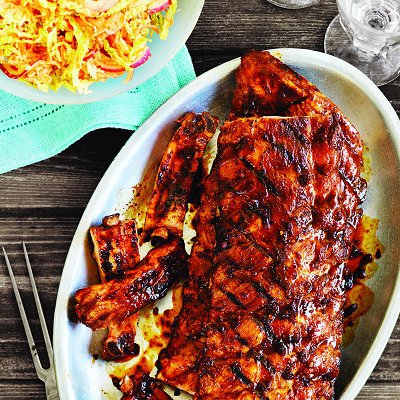 This past weekend we hosted Mother’s Day dinner, which meant I needed to do some chef-ing on a day I’d hoped to do nothing at all. Dilemma. So I perused Chatelaine to find a recipe to feed a crowd that was also make ahead. And the chili-espresso ribs recipe came out the winner, especially because ribs are one of my Mom’s favourite meals.

Now if there’s one thing I know nothing about, it’s how to make ribs. Sure, I’ve eaten plenty of them over the years, but they’ve never played a starring role in my kitchen. But now having made this dish, I can’t believe I ever hesitated. It was easy. It was make ahead. It was delicious – the whole family agreed.

Most of the ribs I’ve eaten have been prepared by marinating, baking in the oven, then barbequing to crisp them up. But this recipe called for them to be marinated for at least two hours (or overnight – ideal for the make ahead crowd), then cooked in beer on the stove top for about an hour. The marinade, a paste, is made of garlic cloves, chili powder, balsamic vinegar, brown sugar, cayenne powder, and salt – all tossed in a food processor and blended until smooth. You then rub the paste all over the ribs and stick them in the fridge for the night.

Once you’re ready to get cooking, the ribs go in the beer bath in a big pot on the stove (I used a roasting pan across two burners as I didn’t have a pot big enough), and cook for about an hour until they’re “fork tender.” The final step is to make the sauce for the BBQ, which is a combo of cider vinegar, brown sugar, instant coffee, chili powder and hot sauce, boiled together then simmered until it reduces by about half. The ribs get brushed with the sauce, then on the BBQ they go for about 10 minutes until they’re glazed and crispy (you do need to watch them and turn them regularly so they don’t burn, and brush often with the sauce).

We ate the ribs with a green salad, and the meal was given big thumbs up all around. These ribs were more savoury than sweet, and certainly more crispy than saucy. But they were definitely finger licking messy – a sign of perfect ribs – so don’t forget to have plenty of napkins and wet wipes ready.