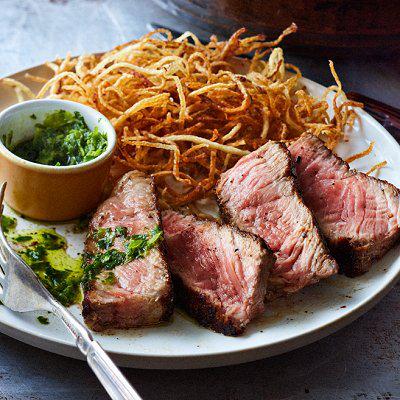 I was setting myself up for disappointment when I decided to prepare this recipe in the dead of winter with my countertop grilling machine rather than the barbecue in the backyard covered with fresh snow. But who could resist being tempted by the photo in the Chatelaine cookbook on page 152?

The sauce in this recipe intrigued me. I had never tried chimichurri in Argentina as I always ate my steaks sans sauce (they were that good!). But it sounded really tasty so I was excited to try it. I was even prepared to pull out my food processor in order to make it (which, if you know me, I try to avoid using due to the lengthy process of washing, drying and stowing it back in the cupboard after use).

Once the blades of the food processor made their first slice through the jalapeno, onions, shallots, cilantro and parsley, the kitchen was immediately filled with the fresh and aromatic scent of what I could only call ‘summer’ (which is the season enjoyed by Argentineans right now as we contend with winter). Yep, I was going to enjoy this meal. I just knew it. 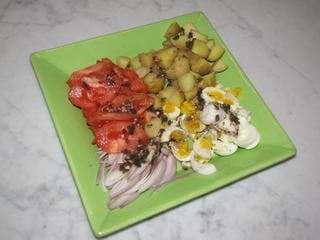 After making this sauce, I proceeded on with prepping the salad. Be mindful that with hard-boiled eggs and boiled baby potatoes in a cool salad, you’ll have to prep them ahead of time. But once the potatoes and eggs were on the counter cooling, I took a break from the kitchen to listen to my toddler recite the names of tank engines.

When it came time to grill the steaks on my, ahem, indoor grilling machine, I was disappointed to find that the sirloin steaks I had purchased were not like the thick meaty slabs from the cookbook nor like the ones from my memory. They were long and thin. They kind of reminded me of Liver Friday nights in my childhood. Perhaps I should have purchased them from a real butcher rather than from the grocery store up the road. Oh well, they would have to do. We were now getting hungry.

The steaks would have been tastier had I a) purchased thicker ones and b) used a bit more of the coarse salt and c) grilled them on a barbecue rather than on my kitchen counter, but the tasty chimichurri sauce made up for the lower-quality meat. I can still taste the cilantro and jalapeno on my teeth as I type.

This meal would be perfect in the summertime for entertaining guests when you can do the simple food prep of the sauce and salad in the afternoon (wash, dry and re-stow your food processor) and not have to worry about different dishes being cooked too early or too late, depending on the arrival time of your guests. I would also suggest that once your guests arrive, you slip into the kitchen to arrange your salad so it is pleasing to the eye (as well as the palate) and then head out to the barbecue to grill the steaks. Perfecto! 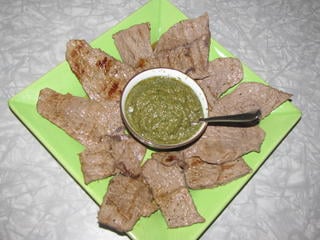