My 19-year-old sister-in-law said, between mouthfuls that is, that the vegetarian Baked tomato risotto tasted “like fancy restaurant pasta.” She also agreed that it would be a good recipe for her to keep on her roster of nice meals to make for (or with) her boyfriend. 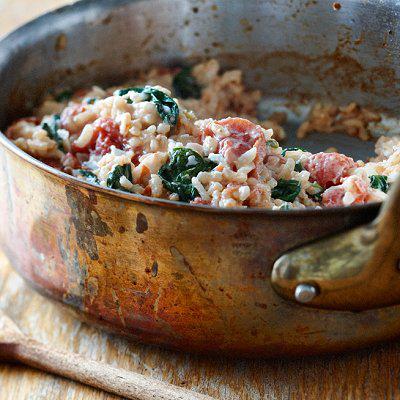 My 19-year-old sister-in-law said, between mouthfuls that is, that the vegetarian baked tomato risotto tasted “like fancy restaurant pasta.” She also agreed that it would be a good recipe for her to keep on her roster of nice meals to make for (or with) her boyfriend. This is one of those magical easy-to-prepare weeknight meals where I benefited from a fast prep time and then had 30 to 40 minutes to clean up, unpack the dishwasher, and even put my feet up for a few minutes while it was in the oven baking. Plus, there was very little cleanup after wards since it was basically done before we even started eating. How’s that for a stress-free dinner?

I realized once I started making this, that I didn’t have an oven-proof pot. I decided that I could do step one in a pot on the stove-top, then transfer the ingredients into a glass casserole dish when it was time for step two. The preparation time for this meal is written as 19 minutes, with 30 minutes of baking time. I am certain I was ready to transfer it into the oven in less than 15 minutes but that may be because I used hot vegetable broth (by adding a veggie cube to freshly boiled water from the kettle). In any case, I was impressed with how little time and effort it took to put it together. I was a little leery that there would be too much risotto to transfer into the casserole dish but it all worked out, thankfully.

I had to do a bit of math with my ingredients, though, as it seems everything I had was not in the amounts suggested by the recipe. Where can I buy a 19oz can of tomatoes? All of mine are 26oz. I guesstimated that 2/3 of the can would be about right, though I suppose that was a little more than what was called for. My log of goat cheese was 113g instead of 140g and the package of spinach was 171g instead of 140g. So basically, the risotto turned out a fraction more tomato-y, less cheese-y and 20 percent more spinach-y than the recipe in the cookbook. And it was still delicious.

Our two-year-old, who is usually a voracious eater, particularly when there is rice in his bowl, was out of sorts and didn’t even try his dinner. We fully expected him to empty his bowl and then ask for more but he just wasn’t interested. If he had eaten his usual amount then we may not have had any leftovers: three adults and one hungry toddler can easily empty one litre of risotto. But we now have enough for two small portions to take for lunch. Now, just which two of us will get them?