We have a few gluten-free friends and family members who often share our table, so I’ve been stockpiling recipes that can work for everyone. And while some gluten-free meals leave me missing, well, gluten (read: tastiness), this creamy spinach and artichoke baked pasta was not one of them 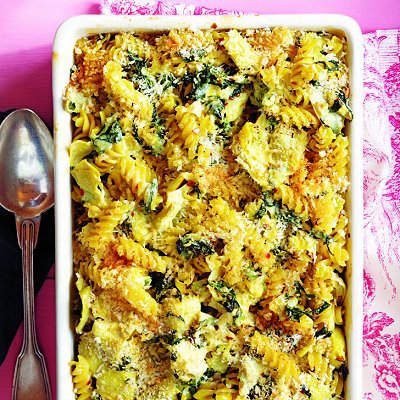 We have a few gluten-free friends and family members who often share our table, so I’ve been stockpiling recipes that can work for everyone. And while some gluten-free meals leave me missing, well, gluten (read: tastiness), Chatelaine’s creamy spinach and artichoke baked pasta was not one of them.

Now from what I understand, gluten-free pasta has come a long way. Today’s options are both delicious and really, indistinguishable from their wheat counterparts … as long as you follow the package directions (I once learned this the hard way, as our pasta turned to a sticky mush). I opted for brown rice fusilli pasta (the recipe recommends a corn pasta, but I couldn’t find it in my grocery store), which when cooked, reminded me of a cross between regular wheat pasta and a whole-wheat version (with a slightly more chewy, hearty consistency). With that step complete, I turned my attention to the chopping and mixing.

The mini sous chef was underfoot for the entire prep, which complicated things because of the sharp knives and hot pans. But once I busied her with counting the chopped artichoke chunks into a measuring cup, I had a chance to focus on what was happening in the frying pan. Essentially the sauce for this pasta is a mix of onion, garlic, chopped fresh spinach, artichoke hearts, vegetable broth, grated Parmesan, and cream cheese. It was quick to pull together, once the veggies were cut and ingredients measured, and was ready to pour over the pasta in no time.

The dish is assembled by tossing the noodles with the sauce, pouring it into a baking dish, topping with panko bread crumbs (optional), and putting in a hot oven (500 degrees) for about five minutes to brown the top. It came out creamy inside with a nice crunch on top from the panko, and was a nice change from the usual red-sauce pasta we usually eat. The mini declared she was not an artichoke or spinach fan during the making of the meal, but then happily ate every last bite on her plate.

I loved this dish, but will say it helps if you’re an artichoke fan (as I am). If not, you could reduce the amount of artichoke hearts, leave them out entirely, or replace with another veggie (maybe mushrooms). No question, I’ll be serving this meal the next time we need to leave gluten off the menu.