Baked harvest pumpkin and sage risotto: Who knew it could be so easy?

As I mentioned in my first post, you can’t believe the food I’ve put pureed pumpkin in (smoothies, scrambled eggs, popsicles…if you’ve ever eaten at my house, it’s safe to say you’ve eaten hidden pumpkin). It’s like my little black dress of food. 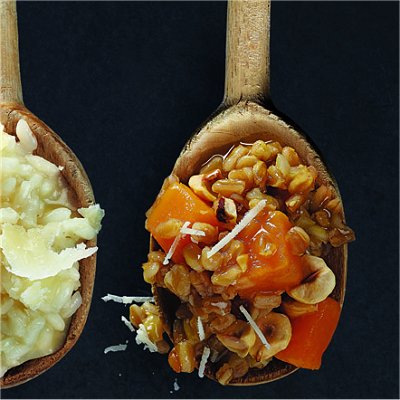 As I mentioned in my first post, you can’t believe the food I’ve put pureed pumpkin in (smoothies, scrambled eggs, popsicles…if you’ve ever eaten at my house, it’s safe to say you’ve eaten hidden pumpkin). It’s like my little black dress of food.

But as much as I adore the canned stuff, I’ve never bought an actual pumpkin outside of Halloween. So armed with Chatelaine’s baked harvest pumpkin and sage risotto recipe, I hit up my local grocery store in search of a “sugar pumpkin” (also known as a pie pumpkin, as I learned). As it so happens, I’ve also never made risotto. Why? Because I just don’t have the time or arm strength for all that stirring. So I’ve stuck to the pre-made variety for years, which is really pretty good – for something that comes out of a box. But because risotto is on my “must cook” list, and this recipe is baked versus stirred, I decided my risotto-making-virgin days were over.

Despite my newfound risotto boldness, as I searched for Arborio rice (do you have any idea how many different varieties of rice there are?), I paused in front of the boxed risottos. But I was committed (I’d already bought the pumpkin, after all), so I grabbed a bag of rice and headed home.

Now the recipe calls for a reasonable 15 minutes of prep time. However, it took me 45 minutes…to cut up the pumpkin. My fault – I grossly underestimated the size of the pumpkin (those scales in the produce section DO have a purpose). But after that it was easy. While I had my doubts the dish would come out perfectly cooked (you don’t even have to stir while it’s baking!), it did. The sage (I used fresh) and pumpkin flavours reminded me of Thanksgiving feasts past, and the risotto got enthusiastic thumbs up from both the hubby and the three-year-old…who even ate it cold the next day.

I also liked that it was a broth-based recipe, so it didn’t feel as heavy as other risottos I’ve had – even with all that cheese. This one is going in the permanent recipe files, and may become my go-to side dish for baked chicken – another staple in my kitchen. Especially now that I have enough bite-sized chunks of pumpkin in my deep freezer to feed my entire neighbourhood risotto…