It’s reminiscent of quiche, but lighter because of the phyllo crust, and the whole family gave it two thumbs up. See ya later, scrambled eggs... 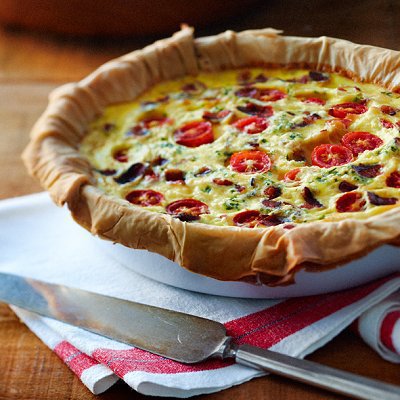 We love breakfast for dinner. But scrambled eggs can get boring, and I can only accommodate so many demands requests for ghost, cat, whale, or Little Bear shaped pancakes. So between that and a late night search for a bacon-themed recipe to curb a craving, Chatelaine’s bacon and egg pie made it into this week’s recipe rotation.

Now while the individual ingredients of this dish sounded delicious – phyllo pastry, goat cheese, cherry tomatoes, eggs, chives, BACON – I initially struggled to imagine how it would all taste together. But not to be deterred (my bacon craving had yet to be satisfied), I set everything on the counter and the mini and I got to work.

First we cooked up the bacon, adding a couple extra strips to the pan because I knew we’d be sampling as we went. Then we made the cheese mixture in the bacon drippings pan, cooking the onions until soft and melting the goat cheese until smooth. Once that was set aside, we turned our attention to the phyllo. And once again, I made friends with phyllo pastry. However, I might suggest doing this step without a mini sous chef if you’d like your crust to look anything like the picture below. The cheese mixture is then spread over the phyllo base, making it as even as possible.

The egg mixture was whipped up in a flash, which was a perfect job for mini sous chef, who has become quite adept with a whisk. The eggs are poured over the cheese mixture and the whole thing goes in the oven to bake. A tip: Place the pie plate on a baking sheet before pouring the eggs in and trying to slide it into the oven. I went sans baking sheet at first, and promptly covered my oven’s (hot) window with raw (now baked on) egg. The dish bakes on the bottom rack of the oven for 20 minutes. Then you take it out and scatter the cut cherry tomatoes and crumbled bacon over the top and bake it for another half hour.

As it turns out, Chatelaine is on to something here with this pie: it’s reminiscent of quiche, but lighter because of the phyllo crust, and the whole family gave it two thumbs up. See ya later, scrambled eggs.