I’m beginning to love slow-cooker meals. It’s unbelievably satisfying to toss in a bunch of ingredients, press a button and walk away. And even though my crisp is low maintenance, it has nothing on the simplicity of this recipe 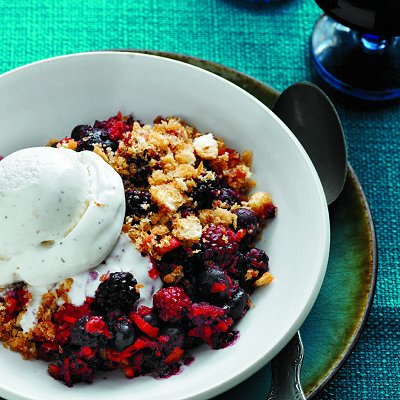 Without question, my go-to dessert is an apple or berry crisp. Served straight from the oven with real (read: high fat) vanilla ice cream. Packed with fruit and an oat-brown sugar crust, it’s fairly healthy (as far as desserts go), plentiful, and liked by even the pickiest of eaters. So when I saw Chatelaine’s slow-cooker apple-berry brown Betty, I knew I had to give it a try.

I’m beginning to love slow-cooker meals. It’s unbelievably satisfying to toss in a bunch of ingredients, press a button and walk away. And even though my crisp is low maintenance, it has nothing on the simplicity of this recipe. You start with a large package of frozen berries (I used an organic mix of blueberries, raspberries, and strawberries), which goes right into the slow cooker insert, frozen. Step one, done. You then core and chop two apples, leaving the skins on (the skin’s pectin helps everything thicken), and add to the berry mix. Step two, done.

Next you need a (stale) crusty Italian loaf. I didn’t have stale bread on hand, so I lightly toasted the loaf before tossing it into the food processor. Then you pour the crumbs into a bowl and add the brown sugar (only 1/2 cup, and I actually reduced it to 1/3 cup), spices (cinnamon and ginger), salt, and unsalted, melted butter. I only had salted butter so I omitted the recipe’s salt, which worked just fine. Once the crumb mixture is combined, you sprinkle it over top of the berries and apples in an even layer. Step three, done. Final step is to take a tea towel, which, when folded in half and placed between the slow cooker insert and the lid, helps absorb the moisture from the fruit as it cooks.

The brown Betty is cooked on high for about 1.5 hours, during which time I prepped dinner and sent chef-in-training out for the best vanilla ice cream he could find. This Betty was delicious – the crumb mixture wasn’t as hearty as the oat-based topping I usually make, so it let the fruit flavours shine through more. Mini sous chef even had two helpings, which leads me to the only tip I have for this recipe: Make sure there are enough people around your table to finish this dessert (or maybe skip dinner altogether?) – it’s best eaten same day.