After fleeing a bomb-torn Beirut, Pamela Bakalian finds the comfort foods of her past in an unlikely place: Ottawa’s little Lebanon 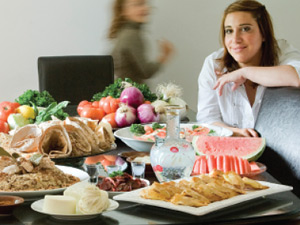 “When the bombs started flying in Lebanon, my youngest son was six months old and the other kids were pretty scared,” says Pamela Bakalian as we drive down Ottawa’s Bank Street on a gloriously sunny day. “I lived through war as a child, and I said that if I ever had kids I wouldn’t let them go through that.” So two summers ago, when the French embassy brought in battleships to escort its citizens out of the country, Pamela told her husband, Christian, a pastry chef and French ex-pat, that the family (13-year-old Anthony, 11-year-old Ivan, eight-year-old Melicia and baby Raphael) would be leaving Lebanon.

“When we boarded the Mistral, the French navy was amazing,” she recalls. “I evacuated in 1987 under very different circumstances, but this time they were so organized and so great to the kids.” Still, it was a long trip: three days to Turkey before boarding a flight to Paris, where Pamela (who works in public relations) and Christian (renowned for his pastry skills) were met with job offers, from London to Mauritius. They settled in Ottawa because, she says, “we were thinking of the kids. We wanted a place that was safe, and I’ve never felt as safe as I do in Ottawa.”

But while feeling secure is paramount, it doesn’t stop Pamela from longing for home. “Lebanon is a beautiful, beautiful country,” she says. After her first evacuation, as a terrified seven-year-old, Bakalian returned to Lebanon twice: the first time with her family, at age 11, and the second upon graduating from university in Paris. Many of her friends did the same, hoping to contribute to Lebanon’s rebirth following the ruinous civil war that raged there for 15 years. When the conflict ended in 1990, the country spent the next 16 years attempting to rebuild. But in 2006, Lebanon found itself at war once again, this time with neighbouring Israel, prompting the mass exodus that brought Pamela, Christian and the kids to Ottawa. “My family is still back there, but I wouldn’t live in Lebanon again,” she says.

Today, both Pamela and Christian work at Le Cordon Bleu Ottawa, Pamela in marketing and Christian as head of operations. But while her nine-to-five is dominated by French cuisine, at home Pamela often prepares Lebanese stews like molokhia (named for the type of greens that it’s made from) and kibbe labaniye (creamy meatball), saving the more elaborate Lebanese snacks – makdous (pickled eggplants stuffed with almonds), falafel (chickpea croquettes) and sojok (spicy sausage) – for the new-found friends who have become just as close as family. “In Lebanon, food and family are the same,” Pamela says.

As we swing through the turnstile at the Mid-East Food Centre off St. Laurent Boulevard – the nucleus of Ottawa’s Lebanese community, an ethnic enclave full of Lebanese-owned restaurants, flower shops and grocers – we’re immediately greeted by the aromas of cardamom and star anise. After drooling over the fresh baklava in the bakery, we stroll the pickle aisles (yes, there’s more than one). Pickles, Pamela informs me, are very important to Lebanese cuisine. Here, there is row upon row of pickled everything – mini-eggplants stuffed with walnuts, and turnips blushing from the addition of beet. The cheese section (where we pick up our ingredients for the beurek – phyllo triangles stuffed with cheese that are part of the meal we’re making together today) leads to the yogourt aisle, which leads to the nuts and dried fruit and on to the meat counter, where we buy ground beef and a chicken for our main dish of riz a djeij (chicken and rice). Trying to imagine what all of these ingredients are going to taste like together, I ask Pamela to name the hallmarks of Lebanese cooking. “Olive oil, abundance and family,” she answers.

ans, Pamela reaches into one of the birch cupboards in her kitchen and pulls out a special glass jug with a spout. Into the jug goes a healthy dose of anise-flavoured Arak liquor. Pamela cuts it with water and adds ice, and, as I look on in amazement, the clear liquid turns milky white. Then she fills a pretty dish with the fresh est-ever pistachios, pours us small glasses of Arak, takes a swig and announces, “Now it’s time to start cooking.”

I survey my surroundings: Pastry books and culinary awards line the bright kitchen, anchored by a hard wood floor and granite countertops. Watercolour paintings – an Ottoman residence overlooking the narrow street of a Lebanese market, Beirut’s famed Sursock Palace – embellish the walls: “A typical Lebanese doorway,” she says of another, a lush green scene set in downtown Beirut. A hand-blown blue and green glass chandelier is a focal point above the large family dining table.
Game plan: We’re going to do the tomato salad first – salatet banadoura – tomatoes, onion, olive oil, salt and pepper. “That’s it. But it needs to marinate for two hours.” We core and thinly slice tomatoes – the biggest we could find at the Mid-East Food Centre – and do the same with a couple of sweet onions. They’re bathed in earthy green Lebanese olive oil and then set aside.

Next, into a large pot go chopped onions, salt, bay leaf, olive oil, butter, ground ginger, peppercorns, cinnamon and pinches of clove and nutmeg for the riz a djeij. As we fry the spices, the kitchen is filled with the aroma of Middle Eastern exotica. “Colour the chicken a bit,” Pamela advises as she adds the roaster to the pot. “It turns a little golden from the spices and changes everything in terms of flavour.” She squeezes in the juice of half a lemon, covers the chicken with water, slaps on a lid – “and now we’ll let it do its thing for about 45 minutes.”

Next we crumble three types of salty Lebanese cheeses – majdouli, accaoui and haloumi – into a large bowl for the filling for the beurek, along with
a few eggs, a spoonful of flour and some parsley. “Please pull the stems off,” Pamela implores as I mince the parsley for the filling, which we will painstakingly fold into delicate pockets of buttered layered phyllo dough.When the timer dings, the chicken is pulled from the pot and set aside while the stock is strained. A knob of butter is added to the now-empty chicken pot along with some olive oil. Back on the flame, in goes ground beef, a cup of rice, then a ladle of stock.

It’s left to simmer for a few moments before more stock is added to the mix. Pamela drops the lid back on. Then we toast a generous amount of slivered almonds until they’re deeply golden, as my mind tries to wrap itself around the various components of the riz a djeij. Pamela is anticipating our main course as well: “You get the crunchiness of the nuts, the meatiness of the meat, the softness of the rice, the chunky chicken, the freshness of the yogourt and then the gravy on top of it all.”

Now the rice is cooked. Pamela turns it out onto a platter, makes a well in the centre and fills it with the boiled chicken she has expertly deboned, skinned and shredded, along with some toasted almonds and a touch of cinnamon. Thick the remaining chicken stock.

When the table is finally laid with our tomato salad, the still-warm golden triangles of beurek and the riz a djeij, it suddenly hits me that in all my life I cannot remember wanting to eat so badly. “That’s Lebanese food for you,” says Pamela after I tell her I can’t get over how impressive it all looks, especially for a meal that wasn’t too difficult to prepare. But more than anything, she notes, Lebanese cooking is about “all the love you spread with your food.” And with that, we grab our forks and dig in.