Will Jian Ghomeshi bounce back, like so many famous men accused of sexual misconduct?

Donald Trump, Bill O'Reilly, Casey Affleck: The list of men who come back unscathed from allegations of harassment or assault is long. Here's why Ghomeshi is different. 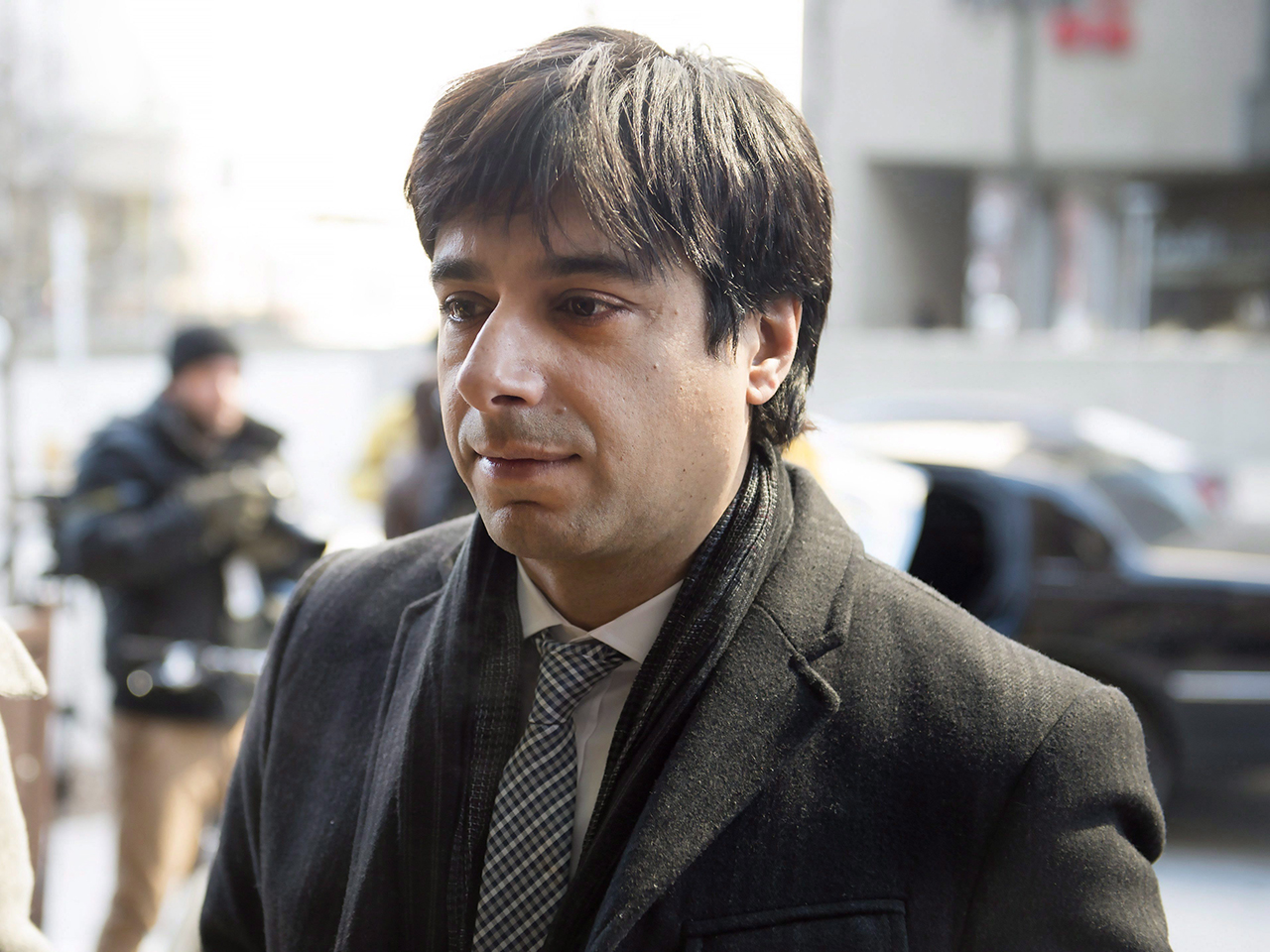 Jian Ghomeshi during his 2016 trial. (Frank Gunn / The Canadian Press)

Jian Ghomeshi’s out-sized ego made his return to media inevitable. Still, it was jarring to hear that familiar voice yesterday, purring away in an extended monologue to mark the launch of The Ideation Project. The website for his new music and podcast series appeared on Monday, just after Ghomeshi resumed his Twitter activity. On the sparse site, he calls the project “a creative adventure with the aim of taking a bigger picture view on newsworthy issues and culture,” adding that content will cover “a variety of topics from politics to philosophy to pop culture and the human condition.”

Plenty of people on social media right now are arguing that we, the media, should ignore Ghomeshi’s comeback because he doesn’t deserve the airtime. That’s a fair position. But, to me, his attempt at a comeback is worth considering with this question in mind: How is it that after allegations of harassment and much worse, so many famous men are able to bounce back?

In case anyone needs reminding, Ghomeshi was fired from his job hosting CBC Radio’s Q in October 2014 after it was revealed that he had caused physical injuries to a woman. (Disclosure: I have worked as a freelance writer, panelist and guest host on Q.) He was subsequently charged with sexually assaulting three women, but was ultimately acquitted. Another charge of sexual assault against a former coworker was withdrawn after he apologized to her and signed a peace bond. His trial was closely watched and, although he was acquitted, he was demolished in the court of public opinion. He disappeared for some time and speculation about his whereabouts circulated like reported sightings of the Yeti up until yesterday.

It’s easy to imagine why he thought a return would be plausible, if not welcome. Consider Bill O’Reilly: accused of multiple cases of sexual harassment, resulting in $13 million in settlements and advertiser boycotts; ratings higher than ever. Or Casey Affleck: accused of sexual harassment of two women on set; won an Oscar. Or Chris Brown: accused of assaulting several women; continues to sell albums and just appeared on Black-ish. And, of course, Donald Trump: multiple allegations of harassment and assault, caught on tape bragging about pussy-grabbing; won the freaking presidency.

A generation ago, their comebacks wouldn’t even be a question. The crimes of famous men weren’t covered up so much as tolerated, ignored or indulged. Their cover was their celebrity, charm and charity work. That’s how Bill Cosby was able to allegedly drug and assault multiple women over decades, and how BBC’s Jimmy Savile preyed on hundreds of people between the 1940s and 2009.

Today, even though more and more accusations of rape and harassment are being made public, only rarely do the accused men suffer professional consequences. They are protected by powerful allies (in Affleck’s case, his brother Ben), or they are too successful and valuable to their employers (like O’Reilly) or still popular with their fans and supporters (like Brown and Trump). Cosby only became a pariah at the end of his career, when his influence, celebrity and power had already been diminished.

Compared to the charges above, the allegations against Ghomeshi were treated seriously. He was actually put on trial. He wasn’t convicted, but he lost his high-profile gig and his status — a fate that might have felt nearly as punishing to him. The difference for Ghomeshi is that his fame was the low-grade Canadian public broadcaster variety, not the deep-pockets Hollywood kind. But more significantly, the fan base that he and his show cultivated tended to be left-leaning, progressive and feminist-minded. That’s not the sort of audience that sticks around after multiple sexual assault allegations.

And in a small country like Canada, Ghomeshi’s trial became a huge and consuming story, as well as an activist rallying point. #IBelieveThem begat #IBelieveLucy begat #BeenRapedNeverReported. Protestors stood vigil outside the courtroom during the trial, which was live-tweeted by the reporters diligently covering it.

This attention and activism didn’t change the outcome of the trial, but it did begin to change the conversation about male power and abuse. And even though Ghomeshi has had his champions, they are largely men’s rights activists, like the Facebook group JusticeForJianGhomeshi and Diana Davison who posted a YouTube takedown of his accusers titled “Jian Ghomeshi: The Collusion to Destroy His Life.” These anti-feminist cheerleaders may have stuck by him, but they’re unlikely to rehabilitate his brand in the mainstream.

Related: Jian Ghomeshi’s apology was no apology at all

What’s more, he seems to be working solo now, producing, writing and composing by himself. At Q, Ghomeshi had some of the very best producers, writers and directors in the country working for him. All those buzzed-about interviews he was praised for were deeply researched and smartly scripted by other people. He did great work because he was surrounded by great people. Q’s peak also pre-dated the podcast boom when there was far less competition. In this new landscape, the pretentious one-man-band style of Ghomeshi’s return is vain and delusional.

Vice writer Manisha Krishnan spoke to Ron Hartenbaum, a manager at New York City-based WYD Media Management, the company that’s supporting Ghomeshi’s new venture. Hartenbaum said listeners should “let the art speak for the art,” adding “My comment on Jian’s past is that it’s his past. It is in the past.”   But for so many people, like the women and colleagues he hurt, it isn’t in the past at all. Asked for her reaction to Ghomeshi’s new podcast, Linda Redgrave, one of his accusers, said she “found it very triggering … re-experiencing the trial in my head, re-experiencing the trauma. I wasn’t ready for it.”

And it doesn’t seem like it’s in the past for Ghomeshi, either. From the beginning, he portrayed himself as the real victim. In a rambling Facebook post at the time the CBC dismissed him, he claimed he was being persecuted for engaging in kinky sexual activities. And that sense of victimhood hasn’t changed.

His inaugural Ideation Project monologue is a shaggy, detouring treatise about exiles, or “nowhereians,” as he dubs them. Here’s an excerpt: “Do all lives still matter? Can anyone really get on a high horse about how their country is somehow immune? There’s no place in the world now devoid of some folks singing this tune.” (A friend of mine termed the style “grandiose Dr. Seuss.”)

Ghomeshi clearly sees himself as one of those exiles, a refugee cast out from his rightful home in the spotlight. He used to be a national voice, but now women’s voices in the conversation he sparked about sexual assault have grown louder than his. His return to the public eye, a homecoming as he might put it, isn’t triumphant or heroic or welcome. Instead he comes across as an attention-junkie who is very sorry about what happened to him but not at all sorry for what he did.

He had a year to plan this comeback, to think about how he’d present himself after months of silence. An expression of humility and remorse might have swayed some people. He opted to display none of either. Instead, it remains, as it always was, all about him.

More:
If standing up to restaurant bro culture makes you ‘a real bitch,’ food-world rock star Jen Agg says bring it on
Four women with day jobs dish on their side hustles
Subscribe to our newsletter