This Federal Election, I’m Voting For Child Care—Here’s Why You Should, Too

A tax credit wouldn't have helped me when I was stuck on 12 waitlists. It won't help the mother struggling to pay fees each month, or the parents whose daycare closes overnight. 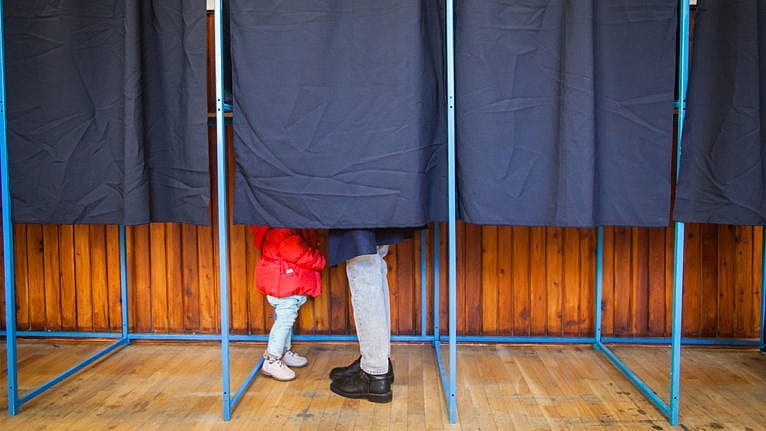 Canada has never been closer to having an accessible, affordable child care system. Eight provinces and territories have signed deals with the Trudeau government that will flow billions of dollars to build thousands of regulated child care spaces and make them affordable. But in the upcoming federal election, the main parties have very different ideas on child care. This is why it’s more important than ever that we parents speak up about how important child care is, not just for our pocketbooks, but for our children’s—and our country’s—future.

I’ve seen Canada’s child care crisis up close, and it isn’t pretty. Like many parents across the country, the moment that I found out I was pregnant, I drew a circle on a map around our apartment and got on every waiting list at every daycare in the area. In our neighbourhood in Toronto, that was 12 lists, all told. So far, so good—in some “child care deserts,” I would have been lucky to find even one regulated program.

After my son was born, I waited to hear back from even one centre with a spot in an infant room. But no such luck.

Because I’d worked as an early childhood educator and a child care policy researcher, I knew the challenge that was coming. But still, with only a few months before I was supposed to head back to work, and still no space secured for my kid, I was panicking. I started to call child care centres. Years of experience in the sector meant that I knew how things worked. I told each centre director that if, for any reason, they had a sudden vacancy that they had to fill immediately, I would take a spot right away and forgo the last months of my parental leave.

In the end, that’s just what happened. In the Hunger Games that is Canada’s child care market, another family’s misfortune was our windfall. Another mother lost her job and had to give up their daycare spot. The centre had to fill the space immediately or risk losing income, so they needed another family to start right away. I told them I could start on Monday.

I’ve been thinking about the other mother a lot, especially now that child care is once again an election issue. That child care space was so expensive that she had to abandon it the moment that her employment was disrupted. Even though it was a great place for her child, even though it would have given her time to get back on her feet, find another work contract or go back to school. It was just too expensive. And for me, the space was so rare that I had to let go of the last precious months of dedicated time with my infant son, or risk not having a child care space at all. I still get calls from some of the centres to tell me that I’ve finally reached the top of the waitlist—and my son is now four. Imagine what would have been possible for both of our families if we had a real child care system.

Now that I work for a child care advocacy organization, I often hear from parents who have experienced the very worst of the child care crisis. Like the families who woke up one day to find out that their child care program had closed overnight (and that it hadn’t been licensed or regulated to begin with, and was being investigated!). Or parents who have had to give up their jobs because they can’t patch together a child care arrangement. Parents who work non-standard hours, outside the typical nine-to-five, and have no regulated options available.

None of this is fair. None of this is just. It should not have to be this way. And—at last—it doesn’t have to be this way. The pandemic has finally made employers and governments aware of a child care crisis that we parents have known about for years. We finally have a $30 billion plan to create more affordable, regulated, flexible child care across the country, to build a real system.

In the federal election, both the Liberals and NDP have pledged their support for the plan. Meanwhile, the Conservatives have said they would cancel it. Their offer is a tax credit—but no tax scheme alone can solve Canada’s child care crisis.

Would a tax credit have helped me when I was on 12 waitlists? It won’t help the mother struggling to pay fees month to month, or the parents whose entire centre closes overnight. Would a tax credit help the early childhood educators earning shamefully low wages despite years of training and the importance of their work? No.

While the Conservatives’ herald their tax credit as being about “choice,” real choice comes when parents have high-quality options available to them. That’s what building a child care system is all about.

It’s understandable to be skeptical about the possibility of building a real, affordable child care system across Canada. It’s taken 50 years of struggle from child care advocates to get us to where we are today. We’ve come close before—but this time is different. Even Conservative-led provinces have signed on already, or, like Ontario, have said they want to sign on.

Whether your child care challenges are nearly over, or just beginning, in the federal election on September 20, we finally have a chance to address the child care crisis head-on. While the debate has been framed as being about which plan—$10 a day child care versus a tax credit—is better for your personal finances, it’s actually about something bigger. For children, for parents, for our economy and our recovery, this election is about solving the child care crisis once and for all.

Carolyn Ferns is a policy coordinator at the Ontario Coalition for Better Child Care and the mother of a four-year-old.