The Trump administration’s escalating attacks on minorities have made it easy for many to view Canada through rose-coloured glasses. 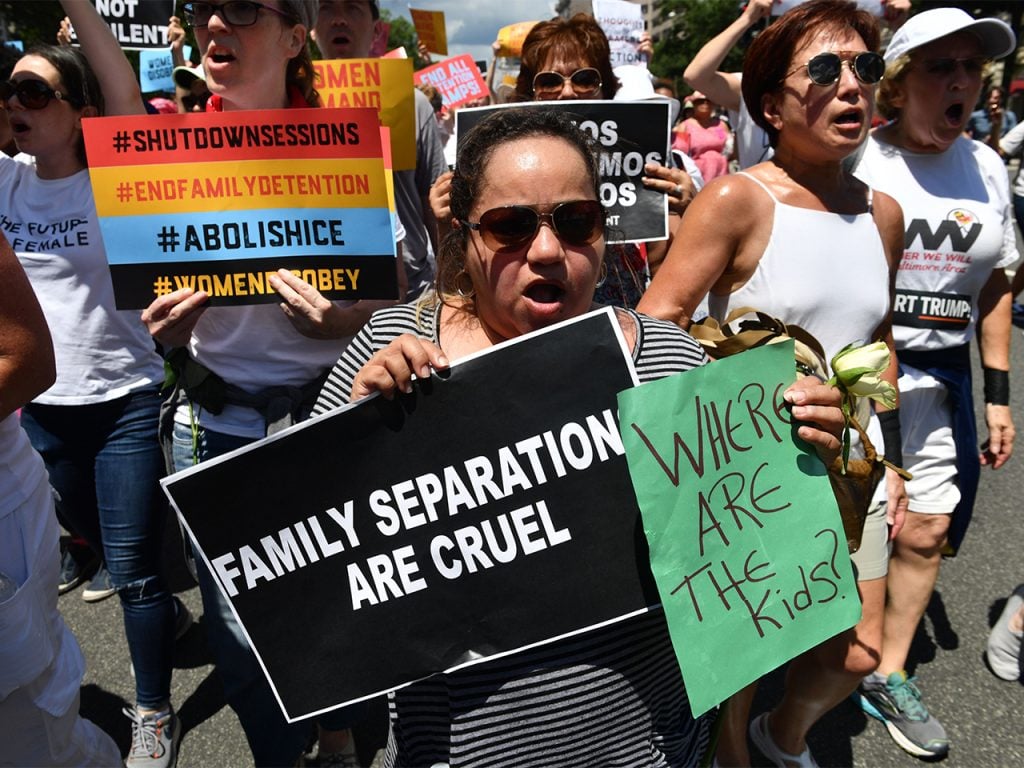 People demonstrate in Washington, DC, on June 28, 2018, demanding an end to family detention and the separation of migrant children from their parents. Photo, Nicholas Kamm/Getty Images.

Last week, the independent US news organization ProPublica released an audio recording of 10 children forcibly separated from their parents by immigration authorities. If you could bear to listen, you heard several of them gasping for breath between desperate sobs, and others screaming inconsolably for their “Mami” and “Papá.” And over top of their cries, there came the pitiless, amused voice of a border patrol agent: “Well, we have an orchestra here. What’s missing is a conductor.”

This is the soundtrack of the Trump administration’s cruel and immoral “zero tolerance” immigration policy, which prosecutes people attempting to cross the southern American border illegally. Since April, more than 2,300 children, most fleeing violence and poverty in Central America, have been separated from their parents and held in makeshift detentions centres: tents, empty warehouses, big box stores. (Some of those children have since been reunited with their parents, and this week, a federal judge in California ordered the US government to stop separating migrant families and to reunite the 2,000 or so children still in custody with their families within the next 30 days.) 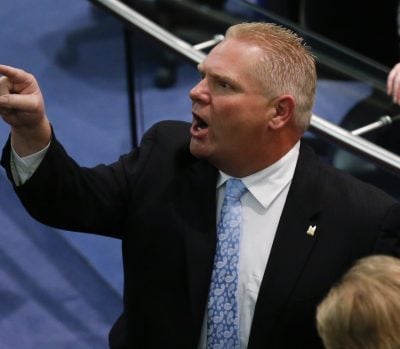 What To Expect From The Doug Ford Era: Anger, Bullying And Questionable Facts

Soon after the audio recording was released, an image began to circulate on social media in response to the child separations: Canadian Cree artist Kent Monkman’s 2017 painting “The Scream” – a vivid, large-scale and haunting portrayal of Indigenous children, shrieking in fear as they are wrenched from their parents’ arms by Mounties, nuns and priests. Those recently recorded tormented cries could have come straight out of the children depicted in the painting, making the parallel between the US zero tolerance policy and the Canadian residential schools system and the Sixties Scoop plain to see.

At least plain to some: The Trump administration’s escalating attacks on minorities — from the Muslim travel ban (which, in a depressing turn of events, was just upheld by the US Supreme Court), to the gutting of voters’ rights protections, to the prohibition on transgender people enlisting in the military, to the crackdown on immigrants — have made it easier for many to overlook Canada’s own failings, from our history of discrimination and violence against Indigenous people to our broken child welfare system and our own treatment of migrants and refugees. The news parody site The Beaverton satirized all the “so glad I live in Canada” sentiments filling social media feeds with a story headlined: “Nation appalled by the U.S. losing 1,500 migrants not as concerned that Canada has lost 4,000 Indigenous women.”

Consider that among the many evils of the US family separation policy is the terrible likelihood that many children will never be reunited with their parents. They lack identifying documents or are too young, or afraid, to speak for themselves. Busloads of children are being shipped into child welfare systems scattered across the country, and there seems to be little oversight and minimal efforts to track them. Earlier this week, a 15-year-old Honduran boy went missing from a holding facility. No one currently knows his whereabouts.

This is brutal. It’s also familiar. Tina Fontaine was 15, too, when she went missing in 2014 from the hotel in Winnipeg where she was living in the care of Manitoba’s child welfare system. Tina was a loved child, raised by her great-aunt Thelma Favel, but she was experiencing more emotional struggles than could be addressed in her remote home community. 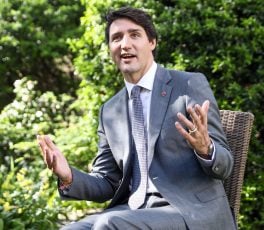 Why Conservative Women Are Sick And Tired Of Justin Trudeau
Favel placed Tina in care with the hope that the child would receive counselling and support. Instead, the girl was lost within the chronically chaotic, over-stretched system. Several days after she disappeared, Tina’s body was found in the Red River. Her disappearance wasn’t an isolated occurrence: In 2015, the year after Tina’s death, police in Winnipeg revealed that four out of five missing persons reports they receive each month involve kids in the care of Manitoba Child and Family Services; 71 percent of those who go missing are girls.

It doesn’t belittle or diminish one source of suffering to compare it to another. It isn’t unfair or unreasonable to respond to an outpouring of anger at one crime with a reminder that related crimes have and do exist. The suffering of any child anywhere on our watch is an outrage.

As Canadians, we are limited in how we can address the deterioration of human rights in the US and take action against Trump’s monstrous policies. But we have politicians and representatives who oversee child welfare systems here, who decide which schools and which communities to fund, who determine how young people are treated by and within the criminal justice system, who develop strategies for youth mental health care, and who create immigration and refugee policy and legislation. (Last year, for instance, we detained 151 minors with their families and 11 without adult accompaniment.)

So, if listening to those children screaming and crying in the US made you furious, you shouldn’t feel helpless. There are many US groups helping migrant children and their families looking for donations. And you can also use that outrage as a wake-up call: Where do your political representatives stand on immigration and refugee issues? How are vulnerable children and families being treated? And what can you do, right now, to make change where you live?