The duo's recent PR missteps are about more than good intentions and irrepressible dorkiness — they're about not getting where most Canadians are coming from. 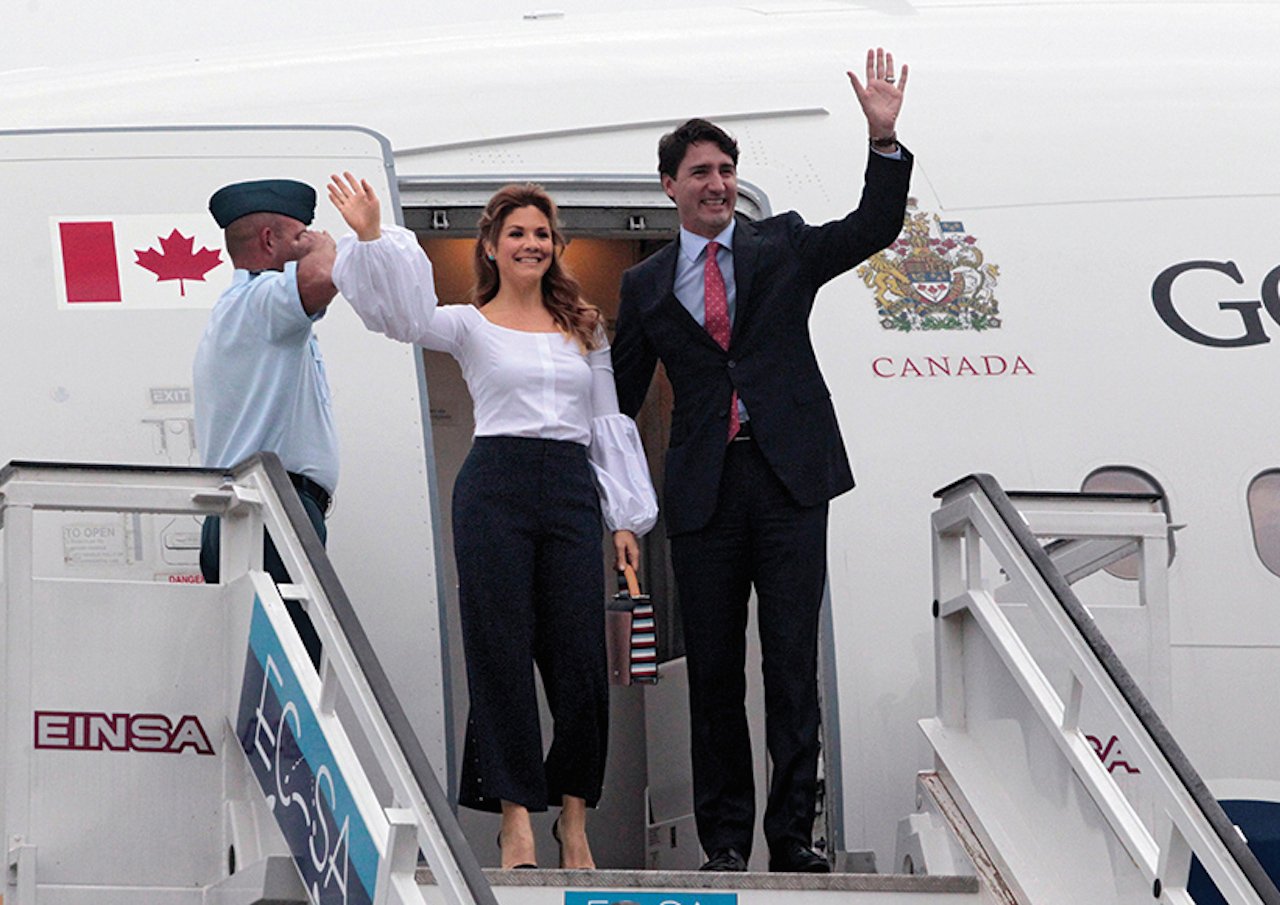 On International Women’s Day (IWD) Sophie Grégoire Trudeau posted an image of herself and the Prime Minister holding hands, and she encouraged women to use the day to salute the work and contributions of men in lifting up women. The message was awkward and the picture dorky — dressed in 1980s après ski ensembles, they gaze at each other with their signature schmoopy smolder. Not surprisingly, people (13,000 commenters counting…) had some feelings about it, declaring it a PR fail. 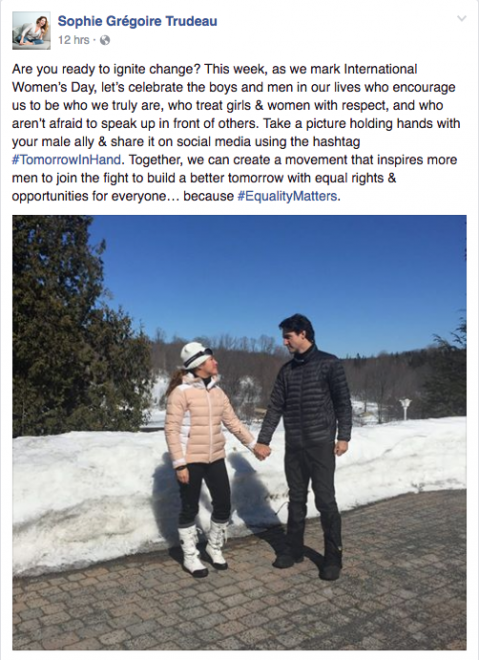 At the very same time, Prime Minister Justin Trudeau did a mansplainy interview with Facebook COO Sheryl Sandberg about the importance of feminism. To be fair, he did demur that “when it comes to gender equality, I often say men should do less talking and more listening!” But then he went ahead and talked anyway. It was irritatingly self-congratulatory. The bar has been set so low for men in authority that when Trudeau acknowledges the importance of, say, paying people fairly for their work, it sounds revolutionary. “Thank you for the powerful difference you are making,” Sandberg told him.

In both the photo and the Q&A, the Trudeaus presented their genteel, non-confrontational take on women’s rights — and were acutely out of tune with the current, grassroots feminist mood. Millions around the globe were protesting on the streets and on strike from work, agitating for urgent issues: decent pay, equal access to education, protection from violence, protection from trafficking and forced marriage, support for immigrants and refugees, rights for trans women, indigenous self-determination, access to life-saving contraception and health care. 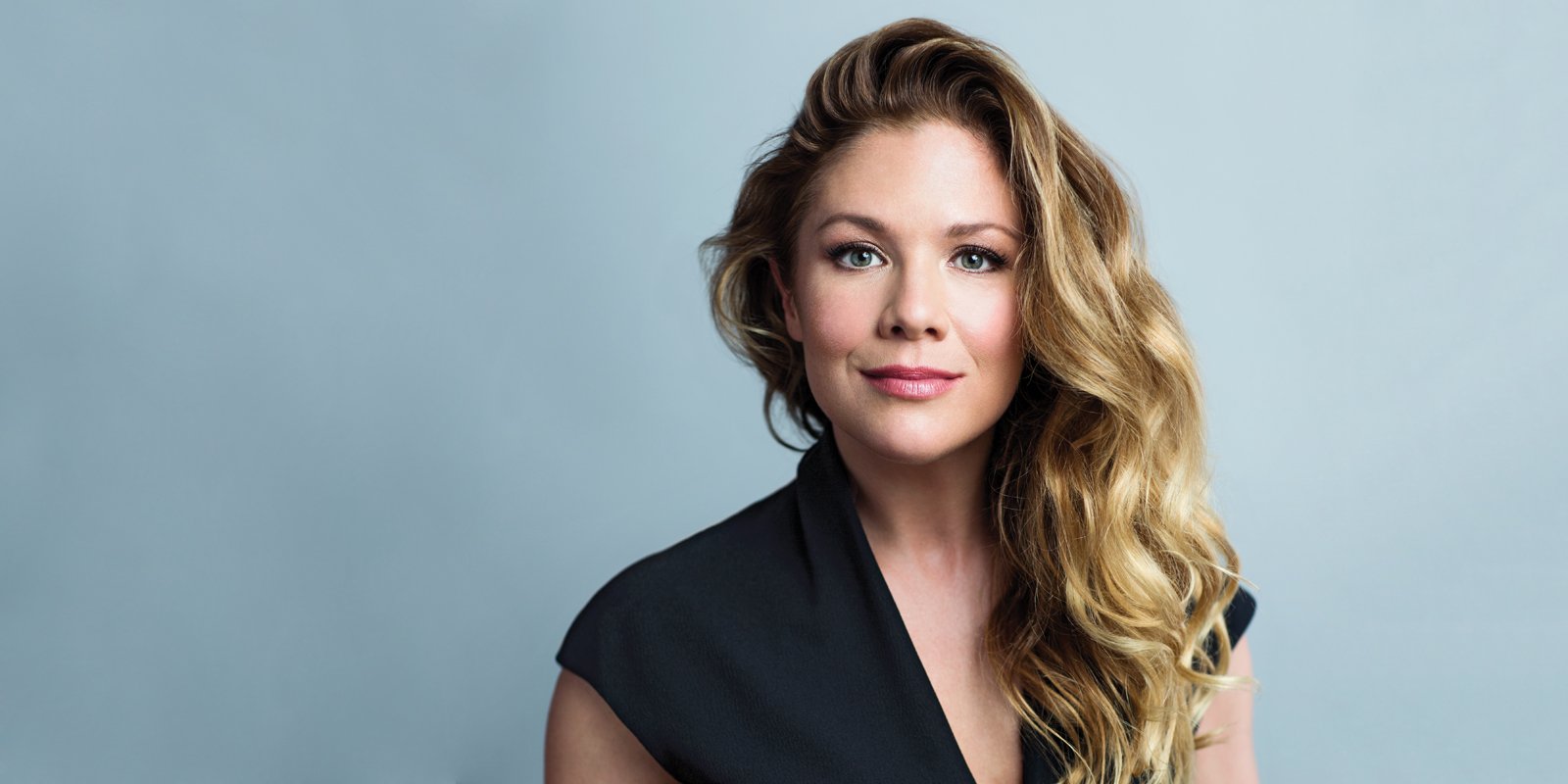 Sophie Grégoire Trudeau on life in the global spotlight

Instead of drawing attention to these causes or focusing on an issue like missing and murdered Indigenous women, the Trudeaus personalized the day, making it a celebration of the PM’s feminist credentials. The Liberal Party even sent out a fundraising request on IWD aiming to cash in on the PM’s work for women.

The Trudeaus are, in fact, serious about gender equality, as well as savvy about their public image. They ought to have known how these incidents would play. But what happened on IWD is what often trips them up: They are so conversant in the language of pop psychology, and a little too taken with their own hype, that they tend to make the political much, much too personal.

When the Trudeaus get their message and their messaging right, they get it very, very right. They’re ready-made for the Instagram and Pinterest age, whether they’re dancing at the Liberal convention or jumping in their pool with their kids fully clothed. When the PM explained his cabinet’s gender parity or met Syrian refugees at the airport, it was with an intuitive feel for the power of a well-landed phrase or an emotionally walloping photograph. The line “because it’s 2015” and the image of Trudeau helping a young girl into a purple parka have become iconic — moving, simple and easily sharable symbols of Canadian virtues and values. Their brand — and, by extension, our brand — is warm, modern, joyful and welcoming. 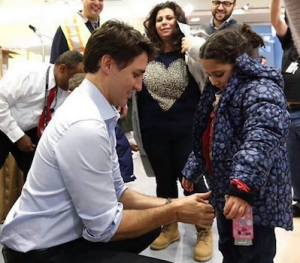 But when they get it wrong, Canada cringes. Remember when Grégoire Trudeau sang at a Martin Luther King Day celebration? Or when Trudeau, who habitually leaps into crowds for hugs and selfies to prove how accessible he is, bolted from a pair of students when they asked him about his commitment to indigenous human rights? Or when he eulogized Fidel Castro as a dear family friend, forgetting that, as the PM, he should probably acknowledge that not everyone experienced the Cuban dictator as warm and cuddly? Or when they took that ethically dubious secret vacation with the Aga Khan?

Just this week, Trudeau took Ivanka Trump to see the Canadian-made Broadway musical Come From Away, about the warm welcome the residents of Gander gave to outsiders stranded after 9/11. This photo-op of genial Canada-U.S. relations came on the heels of President Donald Trump’s second attempt to institute a discriminatory Muslim travel ban and after the Girl Guides of Canada announced that it will not be taking trips to the U.S. in the near future, because of concerns about inclusivity and safety. “We really wanted to make sure that no girl gets left behind,” a spokesperson for the Girl Guides said. 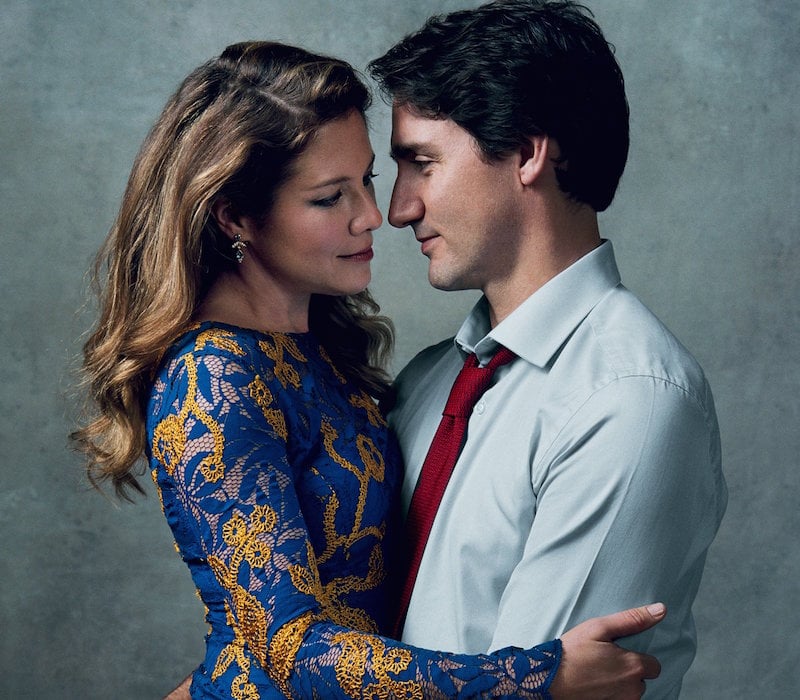 Justin and Sophie: They stare because they care

The Trudeaus can be remarkably naive about their own privilege, and too convinced that social media can close the distance between us and them. When your friend over-shares on Facebook or posts too-intimate images on Instagram, it’s embarrassing. When the PM and his wife do the same, the stakes are much higher. Their inauthenticity undermines the real work they seek to do on issues like gender equality.

There’s a palpable distinction between empathy and sympathy. The former is about truly understanding the experience and context of others. The latter can feel pitying or self-aggrandizing. Often in their attempts to engage in issues like regular people, the Trudeaus come across as sympathetic rather than empathic, or worse than that, as aspirational: Look at how conscious/concerned/inspirational we are. They are the living embodiment of #blessed.

It’s not their fault, of course, that they come from well-to-do backgrounds, him especially so. Nor have their lives been free from suffering and setbacks. She grappled with an eating disorder; he grew up with a mother who was mentally ill and then he lost a brother in an accident.

But these personal, emotional hardships aren’t the same as structural ones. The Trudeaus have worked hard, but they’ve never been poor, never been without means. They’ve always had access to the best schools, the best healthcare, the best job opportunities, the best networks of powerful people. They have lived lives very different than the majority of Canadians.

Contrast them with Barack and Michelle Obama, who grew up in modest lower-middle-class families and who, as African-Americans, have a lived experience of racism. Even after they became successful in their careers, they struggled financially. Running for re-election in 2008, Obama talked about how he and his wife were in their late 30s before they paid off their student loans. That couple, the couple who stressed over the monthly bills, felt relatable to the voters who put them in the White House. The First Lady, in particular, was keenly aware of staying outside the political bubble and remaining true to her South Side Chicago roots.

The Trudeaus don’t have these sorts of biographies to draw on. But that doesn’t mean they can’t be effective in the work they do, nor does it mean that they can’t be strong advocates for their principles and beliefs. In fact, they’ve been most real and most effective when they’ve recognized the specificity of their lives and current positions. 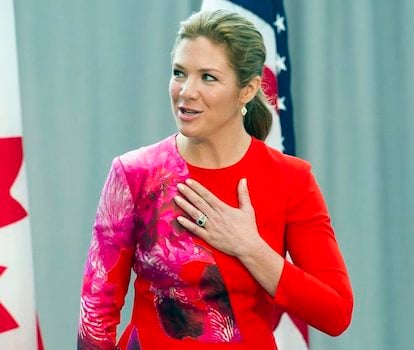 In a newspaper interview last spring, for instance, Grégoire Trudeau spoke about struggling to be the primary caregiver for her three young children while juggling her unpaid duties as the PM’s wife. She was predictably criticized as a whiner, but to me it was refreshing to hear her candidly reflect on the bind she’s been placed in. As a sought-after public speaker, an advocate for social causes and a promoter of Canadian design and culture, she’s an asset to the PM’s office. She’d love to work more, but doesn’t have the support to manage it. Admitting that is not being a diva. It’s being upfront about the unfair expectations placed upon her — and by extension the unfair expectations placed upon all women, who do the bulk of domestic and invisible labour in their families.

As for the PM, he is far more compelling as a leader the less he pretends to be just like us. When I interviewed him during his election campaign in 2015, there was an anecdote he shared that stayed with me. I asked him about his plan to legalize marijuana, a proposal that his opponents dismissed as hippie-dippie nonsense. Trudeau told me about how his late brother Michel had once been arrested for possession of a small amount of pot. Their father hired the best criminal lawyer in Montreal to represent him and he wasn’t convicted.

Trudeau pointed to this as proof of a “fundamental inequality” in Canada’s drug laws. When you’re the child of Pierre Trudeau, a minor drug bust doesn’t become part of your permanent record, affecting your ability to get a job or rent an apartment. But if you’re poor or black or indigenous, it does, he said. His brother’s experience led him to think differently about marijuana laws and how they’re applied. By recognizing how his race, his class and his family’s status set him apart, Trudeau was able to understand how the criminal justice system treats those who aren’t born with the same advantages.

Demanding politicians be more relatable can become a self-indulgent trap, leading them to pander even harder. The Trudeaus don’t need to try that hard. They’ve helped put Canada in the spotlight and they’ve spoken out for good causes. All they have to do is cool it on the selfies and let that work speak for itself.

More:
Subscribe to our newsletters
What $2,000/month in rent gets you across Canada — including a private lakefront house
The five best financial moves women in their 40s can make