An ugly, newfound boldness threatens to dominate the next federal election. This shift to the right is keeping me up at night. 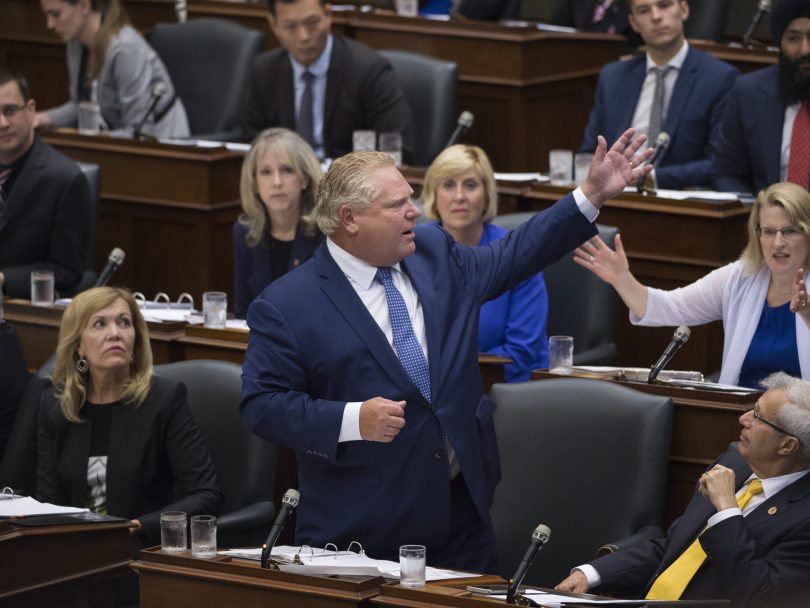 When Donald Trump was elected in 2016, many of us Canadians wagged our fingers smugly at our southern neighbour. “What were they thinking?” we said to one another in line at Tim Hortons. We spent the next year or so glued to CNN, more captivated by American politics than what’s happening here.

The tide in the Great White North appears to be shifting right — but not in the way we’re used to. This isn’t a typical liberal-conservative tug-o-war, the ebb and flow we’ve seen throughout election cycles. This new movement is one that has already swept through Hungary, Poland, the U.S., it’s fuelled Brexit in the U.K. and has seen the rise of the far-right party Alternative for Germany, who have been compared to the Nazi regime. And it’s tilted so far to the right that it threatens to upend our democracy and the very liberties we’ve fought for.

While conservatives have historically called for less government regulation, lower taxes and a stronger military, today’s Canadian right-wing politics has rebranded itself to include more visible intolerance. Bigotry isn’t just bubbling under the surface these days, it’s out in the open and proudly displayed for when the guests come over.

This ugly, newfound boldness threatens to dominate the next federal election, impacting not only the world’s view of us a fair, diverse and welcoming country, but also the lives of all marginalized Canadians. That keeps me up at night.

As a gay mother with a trans child in the Ontario school system, and as a human rights advocate who spends a lot of time on social media, I’m on the receiving end of a lot of messages from people who think it’s “about time” politicians start standing up to “special interest groups.” We’ve been coddled for too long, they say, and we don’t deserve special treatment. They mock, namecall and outright threaten those of us who fight for the rights of marginalized people to be preserved. They’ve always done this, of course, but their voices, now embolded by the very politicians and public figures they support, are growing in number and getting angrier. I’ve had to file two police reports after my life was threatened — and those are only the incidents I reported.
[contextly_auto_sidebar]
This swing to the populist right is both in our face and insidious. Donald Trump might be loud and brash, but his win was unexpected by most. We surveyed the damage from up north, thinking it couldn’t possibly happen here. Surely, Canadians know better. We didn’t.

Modern populism has grown quietly, from the pages of right-wing websites to the birth of new neo-fascist groups such as the Proud Boys, now designated a hate group by the Southern Poverty Law Center. Support for the populism movement gained traction through one protest, one meeting, and one tweet at a time. Now it’s loud and it’s everywhere. It unseated Premier Kathleen Wynne and her Ontario government, with Premier Doug Ford and the Conservatives promising little more than a buck-a-beer and the end of teaching gender identity in schools.

And then, in October 2018, Premier Ford met privately with university professor Jordan Peterson. While the premier openly discussed other meetings that had taken place around that time, the public only learned of this one after the CBC obtained his itinerary through a freedom of information request.

Wildly popular in some right-wing circles, Peterson’s views have been slammed as retrograde, problematic and dangerous. He became well-known after taking a stand against using trans people’s chosen pronouns, claiming being forced to do so is an attack on free speech. He argued vehemently against the federal Liberal government’s now-passed trans rights bill, speaking in front of the senate committee overseeing the bill, and warned his followers about the dangers of “compelled speech.” Peterson has also proposed “enforced monogamy” as a way to reduce male violence and believes “crazy women” can’t be controlled by men because men can’t resort to physical violence against them.

Despite, or, perhaps, because of these views, Peterson, who teaches at the University of Toronto, earns tens of thousands of dollars monthly from his Patreon account, a site where fans can pledge financial support to creators of all stripes. These donations are given to him by admirers, many of them Canadians.

Ford, meanwhile, campaigned heavily on the removal of Ontario’s most current incarnation of the sex-ed curriculum, and followed through — a move that has earned much criticism and more than one lawsuit. However, it was also, in part, what earned his party a majority government. A slew of Ontarians has proudly come out in support of Ford’s policies, including the removal of mandatory student funding for certain college and university services, such as pride centres.

A week before meeting with Premier Ford, Peterson had spoken out in a tweet against the Ontario Human Rights Commission, claiming it to be the most “dangerous” organization in Canada, and calling for the Ford government to abolish it. Peterson has previously said he doesn’t agree with the OHRC’s support of gender identity and gender expression. The OHRC had just joined the legal fight against the Ontario provincial government’s removal of the sex-ed curriculum, which covered LGBTQ+ issues, consent and cyber-bullying.

The Ontario Human Rights Commission does exactly what the name implies: using the Ontario Human Rights Code as its guide, it strives to protect all Ontarians from discrimination and harassment. Those who are fiscally-minded might also appreciate how the OHRC first tries to resolve issues between parties out of court, taking the less-expensive mediation approach. It is not the country’s most dangerous organization, but its dismantling could certainly be very dangerous.

The timing of this secret meeting should ring alarm bells for liberals and conservatives alike. Protecting human rights is, after all, supposed to be a closely-held Canadian value.

Trump’s 2016 victory was a dog whistle for bigotry that reached the ears of Canadians. Doug Ford has proven Ontario will welcome similar politics, while Maxime Bernier’s People’s Party of Canada, a federal right-wing party formed in 2018, has over 30,000 members and a social media presence that speaks out against “political correctness” and “diversity nonsense.”

Taking a page from the Yellow Vest movement in France, the Facebook group “Yellow Vests Canada” has more than 100,000 members. What began as a place to organize protests around the country quickly became a spot where anti-Liberal sentiments and memes are circulated around the clock, several going so far as to call for the Prime Minister’s death. Immigration is regularly condemned, and Islamophobia is dismissed as a made-up word.

While some of the most offensive posts have been removed over recent weeks, the views are still crystal clear. This group isn’t just anti-tax and pro-oil, it’s filled to the brim with intolerance. This message is consistent throughout provincial groups as well, such as BC Proud, Alberta Proud and Ontario Proud. With a combined total of hundreds of thousands of members in these groups, cries of fake news and the danger of refugees abound.

Statistics Canada reported hate crimes had reached historically high levels in 2017, rising 47 per cent over the previous year, with Ontario and Quebec leading the pack on reported incidents. Black, Jewish and Muslim people were targeted most. Quebec saw a 50 per cent increase in hate crimes overall, and crimes against Muslims tripled between 2016 and 2017. In January of 2017, a shooter killed six men and injured several others in a Quebec City Mosque. Meanwhile, Ontario saw a 207 per cent increase in hate crimes against Muslims, and an 84 per cent increase against Black people. Crimes against LGBTQ+ people have also climbed. Swastikas have been spray painted on synagogues and other buildings across the country. Intolerance is growing.

Populism has many sources. Perhaps there are people who are tired of looking inward and are now lashing outward. Maybe, for some, it’s simpler to blame immigrants when they can’t find work than the companies who cut minimum wage jobs and still pay their executives millions in bonuses. Maybe it’s easier to find a scapegoat, to call someone like me a child abuser for supporting my transgender teen, than it is to grow and broaden our ideas of what’s normal.

Societal change can be hard and it can make people uncomfortable, but that’s a flimsy excuse for discrimination.

Intolerance has never gone away, it was simply out of fashion for a while. Now it’s back with a fresh new look and a boost from fake news and social media.

We should all care deeply about this frightening political shift and where it could take us.

I know I care, which is why I’m so scared about what’s happening in this country, and what’s yet to come.

Amanda Jetté Knox is an award-winning writer, public speaker and LGBTQ advocate. She is the author of Love Lives Here: A Story of Thriving in a Transgender Family, which will be published in August 2019 from Penguin Random House Canada. She lives in Ottawa with her wife and four kids.