Stories are a powerful currency, and we owe it to all the women who have died from gender-based violence to share theirs. 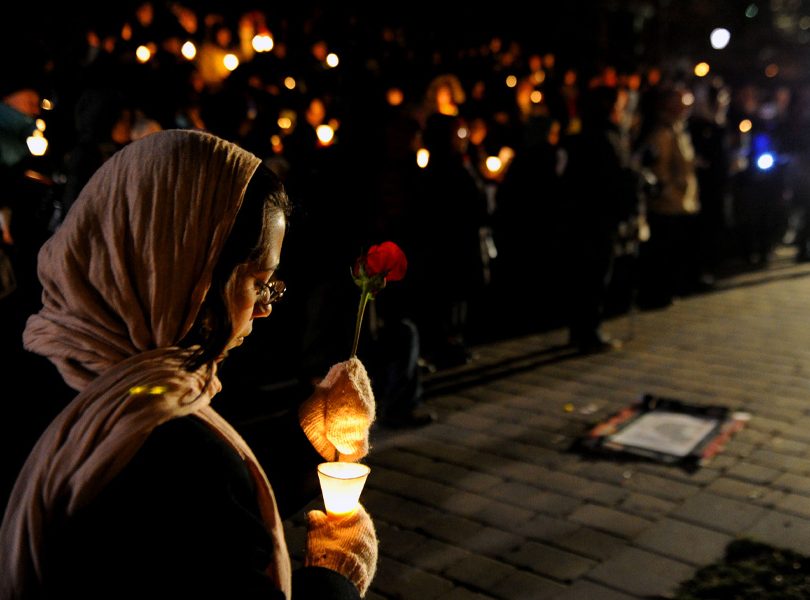 Every year, École Polytechnique reminds us of the continued reality of gender-based violence (Photo: Getty)

*Trigger warning* This article contains references to physical assault and murder that may be triggering to survivors of gender-based violence.

On the 30th anniversary of the École Polytechnique shooting, I find myself wondering where the 14 women might be now if they hadn’t died at the hands of a man intent on hunting “feminists.” Most of them would be in their 50s, well-established in their careers. Maybe they would have children of their own, now college-aged themselves. They would complain about home maintenance or the miseries of menopause. They would have hobbies like woodworking or running half-marathons. They would take up space.

For some reason, it’s imagining the banalities of their unlived lives that gets me—on top of everything, they can’t even have these, the everyday bits of life that I take for granted. They could have just been ordinary women, their names largely unknown outside of their community. Instead, they’re forever frozen in school photographs, eyes fixed on a future that never existed.

As we observe this year’s National Day of Remembrance and Action on Violence Against Women, how do we reckon with the 30 years that have passed since Marc Lépine walked into that classroom and ordered all the women to line up against the wall? Part of it will be asking each other what has—or hasn’t—changed since that moment. But another important part will be figuring out what the next 30 years of December 6 will look like. In a country where a woman or girl was killed every 2 1/2 days last year, it’s vital that we continue to mark this day. But should we change the way we observe it?

In her collection of poems 14, As More Than Just A Number, Anna Humphrey talked about how the victims represented a sort of Everywoman to Marc Lépine: every woman who wouldn’t sleep with him, every woman who had a career while he didn’t, every woman he imagined laughing at him behind his back. Over the course of three decades since the shooting, the 14 women have come to represent a different sort of Everywoman in Canada: When we attend vigils and light candles and recite their names, we’re thinking not just of them but of every other person who has died from gender-based violence. They’ve become symbols of something much larger than themselves.

There are many good reasons the 14 victims of the École Polytechnique stay at the centre of our National Day of Remembrance and Action on Violence Against Women, of course; the vigils were born out of their brutal murders, we don’t want their brief lives to have no meaning, and knowing their individual stories help us understand the terrifying toll of misogyny. But it’s also important to look at who we’re often not talking about when a day that addresses such a huge concept still largely focuses on the deaths of a group of white, cis, able-bodied women. The truth is that the women who died on December 6 aren’t representative of what a lot of gender-based violence looks like in Canada. They don’t reflect the fact that Indigenous women are at a much higher risk of violence than white women, or that disabled women are twice as likely to be sexually assaulted than able-bodied women, or that women who are sex workers live with a far greater threat of assault or murder than women who are not sex workers.

We need to remember the women from the École Polytechnique on December 6, we need to keep sharing their pictures and reciting their names. Doing so feels like a sacred rite, and it moves me deeply to participate in it. But I do think it’s also important to use this time of reflection to examine whose stories are told and how oppressive forces like white supremacy, transphobia and ableism work to uphold the status quo. As we look forward to the next 30 years of fighting gender-based violence and making the world equitable and safe for all women, these are the things that we need to unpack.

So, how do we do this? One place to start is by giving more space to other victims. Many vigils already have a practice of sharing the names of women who have died from gender-based violence within the past year, and this is something that can be done on a much larger scale. The media can and should be highlighting their stories as part of the December 6 coverage. Large organizations should make sure that they have a diverse group of speakers at their events. There can and should be a broader discussion of how various layers of marginalization impact how women experience violence.

It’s always the details about the women who died on December 6 that gut me. The fact that Maud Haviernick and Michèle Richard were in the middle of their final presentation when the gunman stormed in. Nathalie Provost standing up for the women in the class, arguing they were just ordinary students trying to live an ordinary life. Maryse LeClair’s police officer father promising the media that he would report back to them on whatever he found in the building, only to discover his daughter’s body next to the body of her killer. The abstract of knowing that 14 women were murdered is almost too much for me to process, but these anecdotes somehow drive home the senseless brutality of it. All of the lives destroyed on that day were individual and precious, and knowing small facts about each one helps me grasp the larger horror.

Stories are a powerful currency, and we owe it to all the women who have died from gender-based violence to share theirs. Stories like that of Abigail Ootoova, a talented Inuk watercolour artist who was killed by her son. Or Dorsa and Dorna Dehdari, sisters who died in a house fire set by their father. Or Lorraine Kerubo Ogoti, who was killed by her boyfriend just a year after moving to Canada in search of a brighter future. Not only will talking about these women, all of whom died within the past year, make December 6 more inclusive, but it will also help us maintain the urgency of this day. It’s up to us to make sure that all of our work over the past 30 years has not been in vain.