‘We Have The Momentum On Our Side’: Star Player Natalie Spooner On The Shutdown Of The Canadian Women’s Hockey League

We played under grueling conditions for love of hockey—and so the next generation of women players could make it a living. I’m hopeful it can still happen. 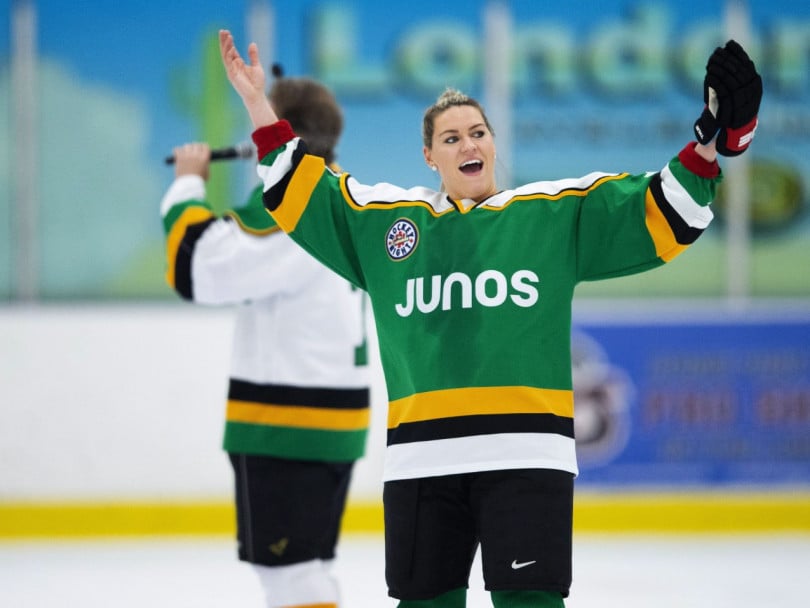 On Sunday March 31, fans, supporters and the over 130 female athletes of the Canadian Women’s Hockey League were dealt a blow in our journey to grow the women’s game of hockey by ultimately creating one elite, professional league.

The CWHL is home to numerous Olympians, former university stars and players from Finland, China, Japan, the U.S.A., Canada and around the globe. The league started 12 years ago and was created by the players, for the players. The not-for-profit structure gave players the opportunity to further hone their skills while continuing to play the game they love, post-university. It also gave national team players the chance to play at the highest level in preparation for the biggest stages in women’s hockey: the World Championships and the Olympics.

I have had the privilege of playing in the league since 2012, and the growth I have seen throughout that time has been tremendous. We are at the point where we have an annual all-star game, teams in China, and the Clarkson Cup, which is our equivalent to the Stanley Cup. This year many young girls were on the edge of their seats during the Clarkson Cup as they cheered on their favourite players, in which a record-setting 175,000 viewers tuned in on Sportsnet to watch. That’s why it was especially shocking when, one mere week later, the league suddenly announced it would be ceasing operations as of May 1st.

To say we were shocked and blindsided is an understatement. We have seen so much growth in the league in recent years, and the outlook was bright for the next generation of young female players.


It would be naïve to think the league was without struggles. We are not making a full-time salary by playing professional hockey, but we certainly put in close to full-time hours. The luxuries NHL players have at their disposal, we’re still working tirelessly for. Many of the women that play in the CWHL have another full-time job—teachers, chiropractors, accountants and engineers. We need to find time each day to squeeze in training, events, appearances, and full-time jobs in addition to extra skill development sessions due to our lack of availability to ice. Our practices start after 9 p.m. so everyone can make it after their work days are completed. Road games can be gruelling; we’ll sometimes have to be up at 5 a.m. to fly to another city, play an evening game, and then are up again early the next morning so we can fly home and get back to our non-hockey lives. Ultimately, we do it because we love it and not for the $2,000 – $10,000 stipend that we receive. I admire all the ladies that I have had the privilege of playing with and against—if you are looking for strong, empowered, female role models, look no further than the women of the CWHL.

The sacrifices all of the women make is immense. Why do we do it? We see the potential for the next crop of stars to take the torch from the elder stateswomen to be able to make full-time careers out of playing a game they love, just as the male players do. We find hope in recognizing that the NHL too had growing pains in its infancy and believe we too could take the women’s game to never-seen heights. Knowing those young fans at our games can dream of one day playing in the CWHL full time is all the inspiration we ever need.

With the announcement of the CWHL closing its doors next season there are a few things that need to happen. First, we must celebrate how far the women’s game has come over the last 12 years, and remember that women’s hockey only became an Olympic sport in 1998. We have the momentum on our side and the world is watching. Secondly, we must continue to pursue the growth of the game for the future so every young girl playing the game can hope to have the opportunity to one day chase her dreams. Lastly, as women, hockey players and fans we need to stand united for the future of the sport. As players we need to use our voices for good and stand up for what we believe is right, so our game is not just sustainable but thriving.

We still do not know where we will play next year or what it might look like if we do. We are being proactive and have started exploring some options, though. We are optimistic about what could potentially be around the corner for women’s hockey if we harness our collective strength.

When one door closes, you throw your shoulder into the wall and create a new door. Within every challenge lies opportunity, and we’re going to do our best to make sure that we leave the jerseys in a better place for the women who will wear them next.

Natalie Spooner is a forward with the Toronto Furies.