And just like that, Miranda gave up her grey pride. 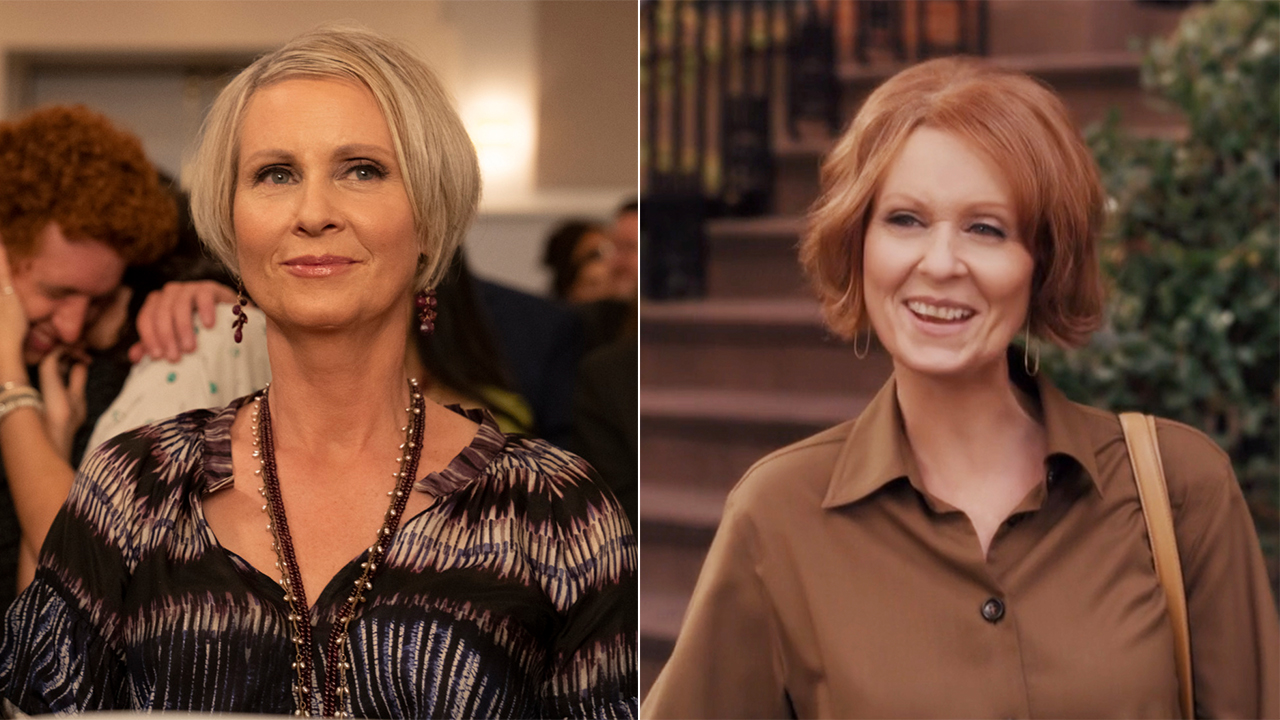 When AJLT… premiered, Miranda debuted a sophisticated silver bob; in Miranda’s last scene of the finale, she’s back to her signature red hair. (Photos: HBO )

Editor’s note: Spoilers ahead for season one of And Just Like That…

“I’m watching it for the clothes,” I lied to my girlfriends in our group chat, trying to justify more to myself than to them what got me hooked on the Sex and the City reboot, And Just Like That… As cringey, yet sartorially satisfying, as the show is, I kept watching because of Miranda and her midlife crisis: She quits her job as a corporate lawyer to pursue a degree in human rights, drinks too much tequila, humiliates herself in the process of learning how to be “woke.” After exploring her sexuality and cheating on her husband by getting finger-banged by her bedridden best friend’s boss in said BFF’s kitchen, she throws away her whole life to follow her new love interest to L.A. It was a big season for a character who was often a bit of an afterthought, and I’m not sure I like this new Miranda. It’s a lot to process for a character who was known for having her head screwed on the tightest.

But it was what was on top of that head—Miranda’s hair—that spoke to me. When AJLT… premiered, Miranda debuted a sophisticated silver bob, telling the other women, “There are more important issues in the world than trying to look young.” When Charlotte (Kristin Davis) pointed out that the grey was aging her, Miranda shot back: “I’m getting a master’s in human rights to pair with my law degree, so hopefully I can become an advocate for women who need one. I don’t have to be a spicy redhead to do that.”

Her defense of grey hair was a glimpse of the authentic, confident Miranda I knew and admired, empowering women to reject ageism, sexism and impossible beauty standards.

After publicly growing out my own white blaze at the age of 42, it felt personal and liberating to see Miranda’s character speak up against the stigma of grey hair, taking back the narrative of how and when women are allowed to age—proudly living in her present body without treating it as a curse.

But just like other other bad judgment calls made by Miranda and the writers of the show, the resolve didn’t last. In Miranda’s last scene of the finale, on her way to chase her whims to California, she’s back to her signature red hair. It felt like the last straw to her unraveling and change of character—but also like a betrayal of who we all think Miranda is.

“So, are you ever going to say anything about my hair,” Miranda asks her son, Brady, who’s about to leave for Europe with his girlfriend.
“Yeah, it’s cool,” Brady replies. A pause. “What happened to all the grey pride?”

“It’s still there,” Miranda says, smiling. “I just felt like changing it up again.”

The frustrating thing is, she looked beautiful. She’d looked beautiful with the grey hair, too, but AJLT… sent a mixed message: After declaring that there were more important things in the world than looking young, it seemed Miranda didn’t fully believe it herself.

Of course, women should feel empowered whether they choose to dye their hair or not—and they shouldn’t need to explain the choice to anyone. Yet my heart still sank with disappointment, because the writers had a chance to normalize natural grey hair on a woman twice as old as I was when I found my first strand in my 20s—but they couldn’t follow through.

And I wasn’t the only one who was bummed out by it. Just like the pandemic forced—or freed—many women to go grey, so did the reboot of Sex and the City. After the finale, one woman on the Silver Sisters Facebook group lamented: “I appreciate her ability and right to “change it up”, but I must admit, the character’s seeming embracing of their natural colour at the onset of the series was part of the catalyst to make me decide to try MY natural colour for the first time in over 25 years.”

As the New Yorker pointed out in a recent photo essay, women have embraced the pandemic’s “silver linings,” but there is still a “reckoning with the transformation.” It seems that if you’re younger than the age of, say, 80, it takes a lot of guts to grey—and the ability to look at yourself in the mirror every day with an uncritical eye.

But the decision to stop dyeing your hair isn’t about looking better or worse. It’s not about letting go. It’s about letting yourself be. And sadly, Miranda let a lot of people down, including me.

Sarah Jessica Parker herself confronted the backlash to her own grey roots in Vogue this past November, after photos emerged of the 56-year-old actress having lunch with her BFF. She says it best: “There’s so much misogynist chatter in response to us that would never. Happen. About. A. Man,” she says. “Grey hair grey hair grey hair. Does she have grey hair?’ I’m sitting with Andy Cohen,” Parker goes on about her friend, “and he has a full head of grey hair, and he’s exquisite. Why is it okay for him?” (I won’t even get into how seemingly every middle-aged cis-male love interest on AJLT… is grey. The repulsive double standards!)

Not everyone wants to be a role model, and I get that, too. I also consider dyeing my hair again, and undoing two years of willpower. I might even look 10 years younger in the process, but I’m sticking with it for the reasons I stopped dyeing. For my 90-year-old grandmother who just this past year joined me in ditching the dye and for the hundreds of women who commented on my story and wrote to me to tell me how I gave them the courage to release the fear of what other people think.

I want to see more storylines where women celebrate change instead of obsessively trying to cling to who they once were. One of the lines Miranda has repeated during AJLT… is this very idea: “Am I not allowed to change a little bit?” Miranda asks Carrie, or maybe all of us. “Or a lot? Or change back again if I feel like it?” Of course she is, even if it’s painful to watch.

Yet we can still hold out hope that Miranda will come to her senses in season two. Maybe she’ll return to the prestigious human rights internship she dropped, or shed a single tear over her adoring spouse of 21 years. Perhaps she’ll even let her sparkly silver self shine through again.