Why Does The Senator Who Called Residential Schools 'Well Intentioned' Still Have A Job?

Conservative senator Lynn Beyak's inappropriate comments got her kicked off the Aboriginal Peoples Senate Committee last spring, but this month she's doubled down, advising Indigenous communities to basically stop complaining and fix their own problems. 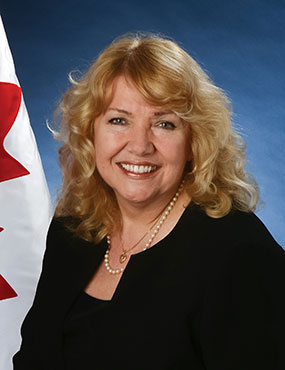 Serious question: What’s wrong with Conservative senator Lynn Beyak? After writing an open letter earlier this month doubling down on her claim that residential schools were “well intentioned,” and telling Indigenous people to preserve their culture “with their own dime,” could Beyak please explain to Canadian taxpayers why she should be allowed to continue to spew garbage on ours?

Beyak — a business owner from northern Ontario who ran twice as a candidate for the provincial Progressive Conservatives in the 1990s — wrote this letter after a summer she promised would be spent meeting with Indigenous groups, as a way to address uninformed and offensive statements she made about residential schools earlier this year. But this is the sentiment that emerged from Beyak’s soul-searching: “Trade your status card for a Canadian citizenship,” she advised Aboriginal people. Beyak — a senator, remember — had to be told that Aboriginal people born in Canada are citizens, and that having Indian status does not preclude a person from being Canadian.

So, another serious question: Is it possible that Beyak is getting dumber over time? Back in the spring, she criticized the findings of the Truth and Reconciliation Commission’s inquiry into the residential school system — which seized 150,000 Indigenous children from their families as part of a government campaign of forcible assimilation — as being unfair, because it didn’t “focus on the good.”

“I speak partly for the record,” Beyak said in March, “but mostly in memory of the kindly and well-intentioned men and women and their descendants — perhaps some of us here in this chamber — whose remarkable works, good deeds and historical tales in the residential schools go unacknowledged for the most part.”

At the time, Beyak was a member of the senate’s Aboriginal Peoples committee, a position you’d think would require more than a passing knowledge of Indigenous history and culture. At the very least, Beyak could have read the Truth and Reconciliation Commission (TRC) report, a serious, deeply researched and exhaustive collection of survivors’ accounts — which did include some positive stories. Not many, of course, because the vast majority of adults who lived through the trauma of these schools reported feelings of isolation, loneliness and a disconnection from their parents and their culture. And in many, many cases they experienced physical, emotional and sexual abuse. Some children were subjected to medical experiments. Others were tortured by an electric chair.

Beyak, who was eventually removed from the committee, blew off her critics — including committee chair Sen. Lillian Dyck and Sen. Murray Sinclair, who served as the chief commissioner of the TRC — with a statement from her office, using language straight out of the Donald Trump playbook: “In this era of fake news and exaggeration, Senator Lynn Beyak is especially grateful to those who have taken the time to do their own research and to deeply and respectfully engage.”

Despite Beyak’s ignorance and misrepresentations of Canada’s history, members of a truth and reconciliation committee in Sioux Lookout, a town in northwestern Ontario, near Beyak’s home in Dryden, generously invited her to meet with them in July. It didn’t go well. Sioux Lookout Mayor Doug Lawrance has since said a photo showing Beyak with the committee might be misleading: “The photograph carries the impression that all is well between our committee and the senator. Clearly that is not the case… Obviously the senator needs to brush up on her knowledge and understanding of Indigenous issues.”

Judging from the statement Beyak posted this month, it’s evident she hasn’t. Her open letter appears to have been removed from her website, but in its place there’s an editorial defending her, written by Brian Giesbrecht, a retired Manitoba judge and an erstwhile contributor to the far-right website The Rebel.

Firing a senator is tricky, however the senate itself could vote to expel Beyak. And a number of politicians and Indigenous leaders have called for Beyak to resign or for the Conservatives to kick her out of caucus. Conservative Leader Andrew Scheer has so far refused to do so. “I certainly don’t agree with her sentiments, she doesn’t speak for our caucus, our party. I certainly condemn the choice of words that she used,” Scheer told the CBC. But Scheer’s criticism is without consequence. Did Prime Minister Stephen Harper’s 2008 apology for residential schools, in which he said, “this policy of assimilation was wrong, has caused great harm, and has no place in our country,” mean nothing to his party?

Beyak was a member on three Senate committees until Wednesday night — the CBC has reported her name will now be struck from all three rosters. At 68, she can serve as a senator for another seven years, earning more than $140,000 annually, plus expenses, with a lifetime pension to follow. And here’s a fun fact: One of the entitlements she receives for being a senator is the ability to claim the cost of purchasing bottled water if she travels to places where tap water might be contaminated. Meanwhile, there are currently 150 boil-water advisories in First Nations communities across the country.

Nunavut Sen. Dennis Patterson, a fellow Conservative, has called Beyak’s comments offensive, erroneous and “way off the mainstream.” But Beyak’s views on residential schools and about citizenship and status are dangerous precisely because they aren’t uncommon. Many Canadians remain ignorant about residential schools and there are plenty who also believe, like Beyak, that Aboriginal people are a drag on the public purse and “just need to get over” colonization. These racist untruths aren’t benign. They foster and perpetuate stereotypes that affect how Indigenous people are treated by doctors and nurses, by police and judges, by landlords and employers, by teachers and child welfare agencies.

And when these lies come out of the mouth of someone with the stature and legislative power of a senate seat and membership in the official opposition party, they carry even more weight. They don’t just reflect on Beyak. They reflect on the senate and her party. As long as Beyak holds her seat, and as long as she remains part of the Conservative caucus, those bodies tacitly condone her views. A final serious question, then, for both for Scheer and Beyak’s senate colleagues: Is someone whose views can only be described as racist really who you want representing you?

This column has been updated.