“Time is up,” said Justin Trudeau in his address at the World Economic Forum. 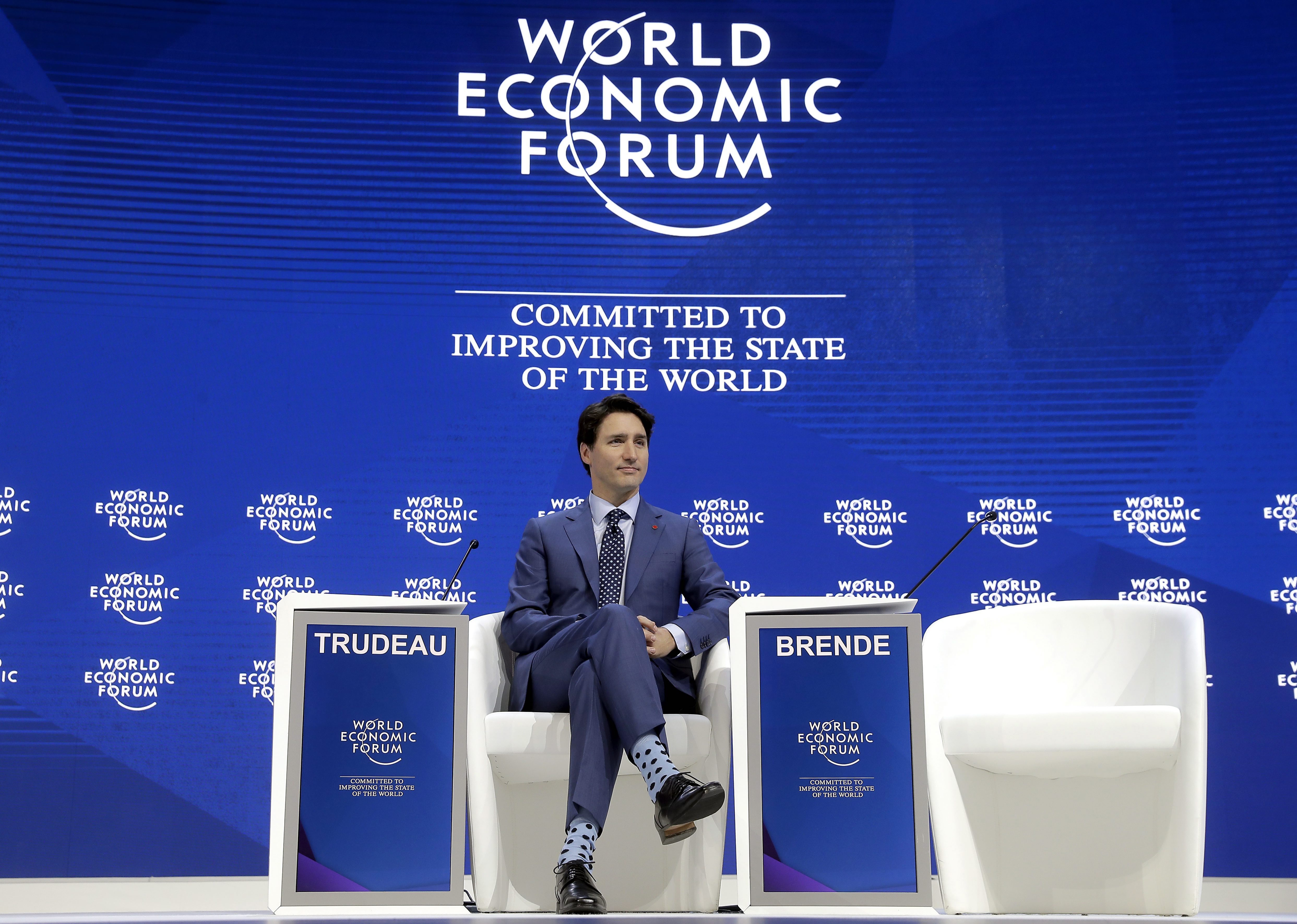 Prime Minister Justin Trudeau’s attendance this week at the ritzy, $71,000-a-ticket World Economic Forum in Davos, Switzerland, is the sort of statecraft-meets-stagecraft opportunity at which the PM and his team brilliantly excel. On the dais, dressed impeccably in a blue suit that matched the set and accessorized with a pair of his trademark novelty socks, Trudeau kicked off the annual one-percenter schmoozefest with a speech about women’s equality, name-checking the #MeToo Movement, Hollywood’s Time’s Up initiative and the Women’s March.

These movements, he said, “tell us that we need to have a critical discussion on women’s rights, equality and the power dynamics of gender… Sexual harassment, for example — in business and in government — is a systemic problem and it is unacceptable. As leaders, we need to act to show that truly, time is up.”

It was peak Woke Trudeau. He was passionate, suave and charismatic. This is his element, after all: a cosmopolitan crowd of fans rapt as he championed his “sunny-ways” vision of an open-minded, progressive Canada. His priority at Davos is talking up trade deals and establishing a tone for Canada’s G7 presidency. He arrived at the forum just as negotiating teams from Mexico and the U.S. were joining their Canadian counterparts in Montreal for the seventh set of NAFTA talks under the looming threat that President Donald Trump is ready to abandon the agreement. In response, Trudeau is promoting Canada to its political allies and current and potential trading partners as inclusive, fair and female-friendly.

Why Some Women Can’t Get Behind #MeToo — But Wouldn’t Dare Admit It He encouraged the CEOs in attendance to hire and promote women, “not just because it’s the right thing to do, or the nice thing to do, but because it’s the smart thing to do.” And he backed those words up with a delegation that includes Foreign Affairs Minister Chrystia Freeland, one of his most valued advisors and a proponent of feminist foreign policy, as well as Status of Women Minister Maryam Monsef, who was on a panel on Tuesday to discuss gender, power and sexual harassment.

Trump might be the forum’s most powerful guest, but thousands of people lined up to hear Trudeau talk, and he is among an exclusive group of politicians — French President Emmanuel Macron, Indian Prime Minister Narendra Modi, and German Chancellor Angela Merkel — allotted a prestigious speaking spot. (Trump is scheduled to talk to the gathering later this week.)

As far as brands go, being seen and promoted as a feminist country led by a feminist prime minister, is a pretty good one — even if we don’t always live up to it. In fact, it’s extraordinary that of all the things Canada is known for — hockey, maple syrup, Ryan Gosling — feminism is at the top of the list.

I’m Pro-Choice, And Even I’m Uncomfortable With Trudeau’s Hard Line On The Issue Still, it’s hard not to feel frustrated at the very real barriers that remain — the forum estimates that it will take 217 years to close the global economic gender gap — and at the irony that our country’s most famous feminist is a man. (And, um, there’s also this: In Canada, women’s average income is 68.2 percent of men’s.)

Nor should we overlook the fact that our PM is making a splash talking about women’s rights at a gathering that, in less hoity-toity circles, would be accurately described as a sausage-fest. The concentration of wealth and power among white men on display each year at Davos is an enormous part of the problem. It’s terrific to hear men like Trudeau talk seriously about women’s rights. It would be even better if women were equally represented in the conversation.

@TheDavosMan, a parody Twitter account devoted to mocking the the bro-y vibe and ultra-rich privilege of the participants, took note of this, tweeting: “Had a good post-yoga spa sesh with Trudeau and Macron. Both consummate Davos men. Now at the diversity lounge looking for women to talk about women’s issues. But there are none here. ‪#inclusion‬‬‬.”

While it’s not known if Trudeau managed to squeeze in a few sun salutations with the French president, the latter half of that tweet sadly isn’t a joke. Just 21 percent of the delegates at the forum this year are women.