How Did It Come To This?

Justin Ling: We are here because politicians have ignored the core facts of the COVID-19 virus and the main strategies that will clearly fight the pandemic. 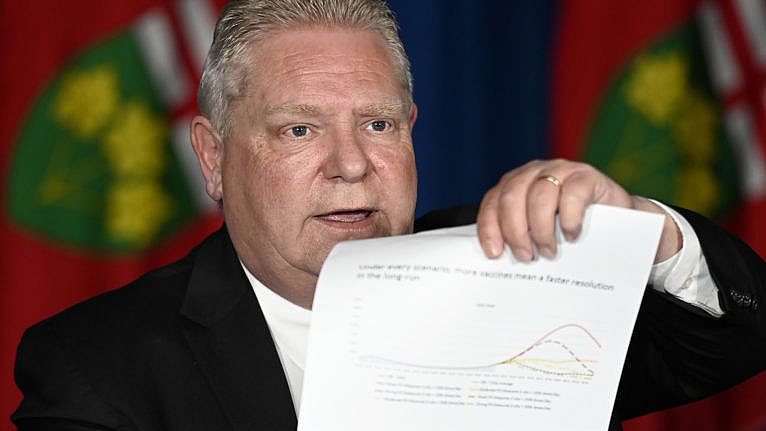 After a year of struggling with this pandemic, science has developed a relatively good grasp of COVID-19.

We know that it is difficult to catch the virus from surfaces: Sanitizing your groceries and obsessively covering your hands in hand sanitizer is probably unnecessary.

We know community spread is driven, in large part, by large outbreaks and super-spreader events: Big gatherings lead to explosions of cases.

We know that indoor transmission is particularly dicey because the virus is easily aerosolized: Many people can get sick very quickly if they congregate indoors.

We know that outdoor transmission is possible, but unlikely: A combination of air flow and UV light means the virus can’t get very far.

While there’s clearly room for smart people to disagree on the details of those conclusions, they have been born out by an emerging body of science. New variants have changed the math a bit, but haven’t fundamentally altered those facts. Early in the pandemic, when these truths and solutions were murkier and less clear, absolute lockdowns, stay-at-home orders and border closures were the safe and prudent choices. Advice on washing your hands and not touching your face were reasonable, cautious, suggestions.

It’s a year later. Those five facts are now incredibly well documented in the scientific literature.

Understanding more about the virus has allowed more effective strategies to come into focus: Avoid indoor gatherings whenever possible. When they can’t be avoided, have as few people indoors as possible, keep people apart from each other, make sure they mask up, and circulate air with good HEPA filters. Where possible, move people outside—and actively encourage the outdoors as an alternative for people who may ignore good public health advice.

Those solutions, of course, are easy to write and hard to implement. Warehouses, prisons, meat processing plants, greenhouses, schools: Even when these places follow the rules most of the time, religious adherence around the clock can be hard to maintain.

So that’s why mass, randomized, testing and aggressive contact tracing is necessary to catch outbreaks before the virus moves down the chains of contact and creates new outbreaks. Shutting down those locations where the outbreaks occur is necessary. When things slip through the cracks and community spread begins, short-term circuit-breaker lockdowns should be a last resort to get cases under control.

There’s no real debate about this. These strategies work: As Atlantic Canada, New Zealand, Australia, Singapore, and a host of other states have proved them effective.

And yet, most of Canada is in the midst of a punishing third wave. Public health officials continue to insist washing our hands will get us out of this mess. Politicians warn us to stay indoors, avoid the outside.

Ontario’s health-care system is hanging on by a thread. Other provinces could be in a similar spot soon.

We are here, in large part, because many of our politicians have ignored the core facts of the COVID-19 virus and the main strategies that will clearly fight the pandemic.

Heading into the spring, off the back of the second wave, the premiers of these provinces have insisted that they were special. That they could reopen the economy—and brag to their voter base about their rosy jobs numbers—without consequence. The leaders of every province west of New Brunswick have laboured under the belief that their gyms, places of worship, and workplaces could open, even amid uncontrolled community transmission, and nobody would get sick. These governments have been sure that they have grown more clever, more agile, more adept than the virus.

Those governments have been wrong, and people have died because of it.

And when things have gone wrong, all the things governments promised us they had done turned to sand. In most of the country, mass testing was promised and not delivered—Ontario and Quebec require appointments, and have not expanded their testing capacity in any significant way since last year. Contact tracing has been essentially abandoned on a provincial basis. Circuit-breaker lockdowns didn’t touch the industries most responsible for spreading the virus.

Governments have begged us to stay at home—except if you need to go to work in an Amazon warehouse (600 cases); the Cargill chicken processing plant (82 cases); the Saskatchewan Penitentiary (more than 260 cases); St. Michael’s Ukrainian Catholic Parish, where congregants could gather without masks (10 cases); Mega Gym, which the Quebec government permitted to re-open (400 cases), and so on.

It is infuriating to find ourselves in the third wave, only to learn that we haven’t learned a damn thing.

Governments have pointed to the variants as some terrifying change in the equation. And, yet, look at Ontario’s data: This is just a ramped-up version of the same virus we’ve been fighting since March, 2020.

In late February of this year, in the lull between waves, nearly 60 per cent of cases could be attributed to a specific outbreak and/or a close contact of someone who tested positive. (A bit more than a third of cases had no known epidemiological link, a failure in and of itself.) In late March, as the third wave was in full swing, that proportion remained unchanged.

Where those outbreaks have occurred haven’t changed much, either.

Recently, Ontario has provided more visibility on the types of workplaces experiencing outbreaks: Hairdressers, restaurants and retail stores are responsible for vanishingly few superspreader events—between the three, they caused just eight per cent of overall outbreaks.

Dig into the data, as the Globe & Mail has done, and the absurdity becomes more acute: these outbreaks are happening in facilities that manufacture sporting goods. A retail marketing firm. An Amazon warehouse.

Many outbreaks also occurred in settings run by governments. There has been widespread transmission of the virus inside prisons and jails—which governments have been criminally inept at preventing. Shelters, too: Ontario’s data shows there are 32 ongoing outbreaks in shelters across the province.

This story is about the same from one province to the next. The data speaks for itself: Workplaces and schools are driving transmission of this virus. Were the whole country to lock themselves in their closets, except for those students and “essential” workers, the crisis would continue.

An emerging body of research explains what’s happening here. From the start of the pandemic, leaders have told us that the concern is about the transmission of droplets—and, rightly so, because the early science suggested that saliva particles from speaking, coughing or sneezing was the main driver of transmission. Good science is increasingly telling us that the virus is aeresolized.

That means we ought to be less fearful of tiny blobs of the virus covering everything—our hands, our faces, our picnic blankets—and more worried about the air around us. If you think about the virus that way, it becomes immediately obvious how much less risky it is to sit with some friends for a picnic, or on a restaurant patio. Conversely, how risky it is to run a warehouse with hundreds of workers, exerting themselves.

Have governments addressed this? No. Instead, governments have proffered curfews, as though the virus hunts at night. Parks have been closed. Camping has been banned. Outdoor mask mandates have been implemented. Outdoor gatherings limited. Police patrols to harass people out for walks.

Even as projections have shown Ontario teetering on the brink of a deadly crisis, Premier Doug Ford’s solution was to limit outdoor gatherings and to shut outdoor recreation sites.

But here’s the rub: Provinces know outbreaks aren’t happening in parks, or on patios. Quebec public health officials have acknowledged that they have no evidence to prove transmission is happening outdoors. Peer-reviewed studies have said that, on the high end, some eight per cent of global COVID-19 cases were linked to transmission outdoors. On the other end, Ireland studied its own data and found 0.1 per cent of cases occurred outside. Air quality monitoring done in Italy in the height of the second wave found the prevalence of the virus in the open air was either negligible or not high enough to lead to transmission. (Though researchers admitted that dynamics could change in very crowded areas.)

Scaremongering about outdoor transmission, and instituting curfews is a feat of social engineering. This an effort to ignore the data, withhold information, and twist the facts to scare us.

The conspiracy-minded will see that as an exercise in population control: Politicians getting their jollies off by playing dictator.

The reality is more mundane—governments are doing this because they are frozen with indecision. Actually acknowledging the reality of the data means acknowledging this catastrophe was caused by governments’ idiotic reopening plans: Plans that were warned against by public officials at the time. Doing that means taking action that will hurt employment numbers, which could hurt our politicians fragile egos. Confronting this data and science also means admitting that all of our advice about washing your hands and not touching your face has been useless. And accepting that reality means provinces requiring sick leave, so people can go home if they’re ill.

Governments are loath to do any of that. They would rather shower us in meaningless pablum about how we, as citizens, need to do our part. The implication, of course, is that we are to blame for this crisis. That it’s us wayward youth who are driving this pandemic. Our lack of personal responsibility means they have to ground us to our rooms. Stay home, for god’s sake!

If our politicians stop blaming us for outbreaks, we may start blaming them.

And for good reason.

We need to stop talking to people like they are infants to be controlled. Especially when the politicians issuing these stay-at-home orders have zero credibility with which to be lecturing anyone. Any bit of trust people have in Doug Ford, Francois Legault, Scott Moe, Brian Pallister, Jason Kenney and John Horgan has been shredded, and lit on fire.

In Atlantic Canada, the territories, and in Indigenous communities across the country, politicians of various political stripe show what real leadership looks like. How effective management means trusting the public while also accepting responsibility.

The rest of our provincial politicians need to act immediately to undo the damage they have enabled. Businesses need to be shut, unless they are absolutely essential. Those that need to remain open need stringent measures to deal with air quality. Given the pressure it puts on parents and students, schools should probably remain open: But, again, actual measures need to be taken to reduce the risk of that aerosolized transmission.

And we need to provide clear, coherent advice to people on what to do. Advice that follows the science.

But we also need to tell people what is safe. And it is very safe to go outside—it is extraordinarily safe, in particular, if you give people a little extra space and avoid crowded areas.

Have a picnic. Hold a barbecue in your backyard. Go for a walk. Play tennis. Go camping.

People need hope. Lying to them won’t engineer a solution. Politicians need to do their job.