Why Stockings Are The Worst Part Of Christmas

This year, you have my written permission to say 'screw it.' Go ahead: skip the stockings. 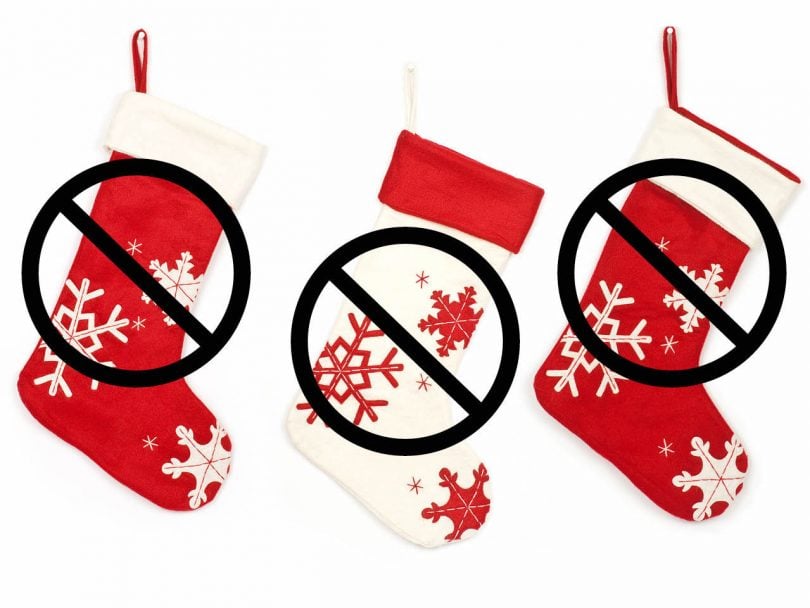 Recently, while writing a short article on holiday gift-giving, I interviewed a woman who equated stockings to “socks full of trash.” “Hahaha,” I thought, and then: “hmmm.” In one hilariously blunt phrase, she articulated a sentiment I have felt since my youth, but would never have dared utter at the risk of costing myself precious knick-knacks: “Stockings—why?”

Once upon a time, I was told they served a very important purpose: finding out whether you were naughty or nice. And my mom had flawless stocking game, which, through a child’s eyes, is usually a perfect ratio of chocolate to toy-filled chocolate to small, colourful toy (ideally also filled with chocolate). But to child me and my friends, stockings served a very specific function: They were an adrenaline-packed prelude to presents, a diversionary pit stop on the way to Barbie Town. Now, at 31, I see the process from the vantage point of friends with kids, who trawl the aisles of Dollarama in a haze.

Unless you belong to a family for whom stocking stuffing is steeped in a warm, cozy sense of tradition, this year, you have my written permission to say: screw it. If you’re met with resistance, back yourself with these not-exactly-cozy facts: In 2018, Canadians spent average of $1,563 while holiday shopping (up 3.7 percent from 2017). And, for some science, we produce a lot of garbage. Dark, yes, but do you really want to toss more Pez dispensers onto the pyres of climate change and plastic pollution?

Of course, heavy-handed economic and environmental arguments aren’t likely to placate a bereft, stocking-less seven-year-old—though they may traumatize them. Better for you, and for them, to zoom out a bit: The best gifts are gifts with intent—the ones you care about giving to a person you care about—a spirit we’ve naturally divorced ourselves from in the unconscious rush to turn our lives into living, breathing Goop gift guides. Doffing stockings can also be a gentler gateway to the more radical notion of no-gift Christmases, though if you’d rather slide slowly into that policy, I’d recommend experiential gifts—like museum passes or concert tickets—instead of heavily packaged stuff.

And the holidays, while peppered with some moments of togetherness and merriment, can be alienating for those who don’t have family—close by, close-knit, or at all—or who can’t afford to participate in the collective gift haul. If you can spend five minutes to peruse the stocking-friendly gift-card rack at your local grocery store, you can probably also take five minutes to ponder why you need stockings at all. Indeed, “why am I doing this?” is a question that should be asked regularly and year-round, but in December, in malls, especially.

Two weeks after that fateful phone interview, I texted my long-suffering mom to gently suggest we press pause on the stockings this year. Us kids are well past childhood, and in preparing to stick-handle our upcoming Irish Catholic get together, she’s got enough on her plate. At first, she called me a “rebel” and insisted she “wouldn’t go overboard.” But then her grip on the emotionally laborious tradition loosened. “Your brothers have ratified the no-stocking suggestion,” she said. The planet will thank us, I reassured her. In true holiday fashion, she told me to relax.