All Hail Cardi B, Who's Embracing Pregnancy Just As Her Career Gets Hot

Getting pregnant as a working woman in her childbearing years can still feel like a risk. 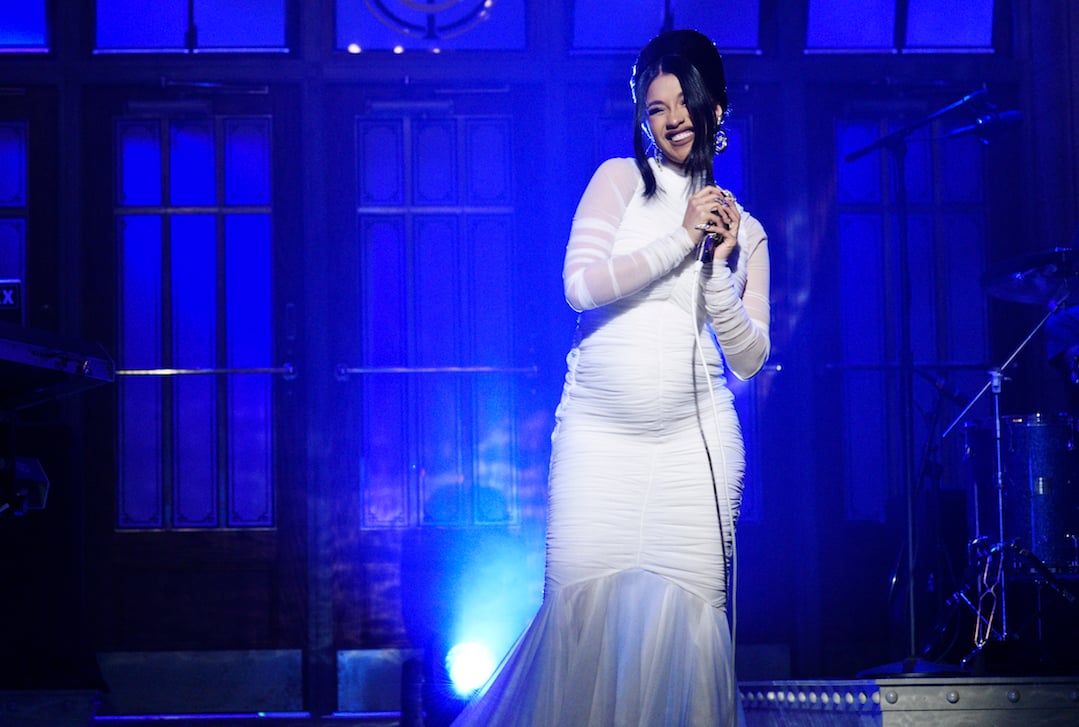 Rapper Cardi B’s fledgling career is on FIRE. Here are the highlights from this past week alone: On Friday, she dropped her debut album, Invasion of Privacy, which is on track to break #1 on the Billboard rankings. On Saturday, she performed on Saturday Night Live a snippet of a little song called “Bodak Yellow,” which burned up the charts for most of 2017. On Monday night, she co-hosted The Tonight Show with Jimmy Fallon, charming the hell out of the audience.

Smack in the middle of all those career milestones, the 25-year-old from The Bronx had a mega announcement to drop: She’s pregnant, a fact made clear by the glorious belly bump she revealed in a tight white dress while performing her single “Be Careful” on the SNL stage.

Of course, Fallon had questions for the frank former stripper, who is having the baby with her fiancé, Offset, a rapper from the hip-hop group Migos: How are you doing it all?

“I don’t know if it’s the strength of the fetus, but I have never felt so hungry to succeed,” she said.

YES, girl. As a working woman in my childbearing years and as someone who finally feels like I’m only just on the upward trajectory in my career, Cardi’s response made me want to cheer. By the time she told Fallon she planned to continue touring (with Bruno Mars, no less) until the baby pops (at which point she’d bring the baby with her), I was pretty much on my feet giving a standing ovation.

Mercifully, the days of pregnancy and automatic bed rest are ancient history. We’re well accustomed to seeing women in the public eye moving forward with their working lives and their family lives — barely anyone batted an eye last summer when NDP MP Niki Ashton vied for the federal leadership while pregnant with twins, and there was nothing but adulation for Beyoncé during both her pregnancies, no question she couldn’t “do it all” (I mean, there is nothing Beyoncé can’t do). Also, most women have to work until their baby’s birth, and many don’t have the luxury of generous leaves after the child arrives.

How Easy Is It (Really) To Get Pregnant After 40?

But I can’t help but feel like there remains a subtle shade of surprise when a woman continues to kill it — and I mean totally crush it at her rising career — when she’s expecting a baby. And that’s because getting pregnant as a working woman in her childbearing years can still feel like a risk.

Maybe that’s because, for most of us, we know, unequivocally, that having a baby will mean taking a career hit.

According to a new American study (which lands this week just in time for Tuesday’s Equal Pay Day in the U.S.), the earning power of women who have their first child between age 25 and 35 never recovers relative to that of their male partners. But women who have their babies earlier or later — before 25 or after 35 — can expect to eventually close the pay gap with their male partner.

The dilemma here is clear: The ages of 25–35 are prime childbearing years (a woman’s fertility drops steeply starting at age 35). This is also the exact zone in which many women are building their careers, where they may be finally feeling confident in their skills and networks, finally eligible for some serious earning-power promotions.

Further to that, there’s the whole stepping-out-of-the-workforce-to-take-care-of-your-infant thing. As Deborah Aarts wrote in Canadian Business just a few years back, “The unspoken truth is that many employers see mat leave as a costly, disruptive hassle they would sooner avoid.” Now that Prime Minister Justin Trudeau has indeed made good on his election promise to extend parental leave to 18 months, it remains to be seen whether a secondary parent will take part of that leave (as Trudeau hopes), or if it’ll still be the woman who gave birth to the child who stays home — if she’s the lower-earning parent, it might make more sense financially for her to remain out of the workforce longer in lieu of paying exorbitant fees for childcare.

There is also the cultural notion that women tend to scale back in preparation for motherhood. It’s there, written in between the lines of People’s article on Cardi’s announcement, when they point out that she isn’t “slowing down” in the months before becoming a mother.

Maybe I’m just energized by her willingness to plow past unspoken, lingering expectations that a woman’s career oughta take a backseat to developing a fetus into a baby. Her hunger to succeed as she prepares to become a mother feels relatable, too, in the face of all these odds.

I think more Cardi Bs in our popular culture, and in political culture, would help further shift public views and policies in a direction more favourable of motherhood, where a mom-to-be can feel thoroughly supported and not so anxious about whether she’s risking her rising career by having a baby too. If Cardi’s worried, it definitely doesn’t show.