I ate Michael Phelps's Olympic breakfast so you don't have to

Katie Underwood said she could win a medal if eating breakfast were a sport. So we served her Phelps's impossibly large morning meal.

I ate a lot of food on the Internet yesterday. It all started last week when, at the apex of our office’s Olympic fever, I explained that I, too, could count myself among the Games’ many female victors if eating breakfast was a sport. (I believe my exact boast went a little something like this.) My coworkers, naturally, were skeptical.

What better way to prove my digestive capacity than to eat Michael Phelps’s Olympic breakfast? The impossibly huge morning spread was part of his famed meal plan, which left many thoroughly grossed out when it was revealed back in 2008.

And so yesterday afternoon, I found myself sitting at a table loaded with three thick pieces of French toast, three very large chocolate-chip pancakes, a deep bowl of Cream of Wheat, three fried-egg sandwiches (topped with marble cheese, lettuce, tomatoes, fried onions and mayo), one five-egg omelette (split in two, for ease of plating), two cups of coffee and a glass of water.

I tackled the spread, bite by bite, on Facebook Live. The weirdness of eating in front of thousands is an experience that, I’ve learned, you can never quite prepare yourself for. (Think The Truman Show meets hot dog–eating contest meets those dreams where you’re public-speaking in the nude.) In any case, I’d call it a personal best: I finished about half of Phelps’s brekkie in 90-ish minutes, which is no small feat considering I weigh less than half as much as him.

Viewers buoyed my spirits throughout with words of encouragement, like “I believe you can fly,” “YEAH GIRL YOU GOT THIS” and “Less talking, more eating.” One even offered to bring me bacon. They also had questions, like “Can I have your leftovers?” and “How can anyone eat that much bread?” I’m so glad you asked! Below, a play-by-play of my hopes, fears, eating strategies and bodily grievances as I swam through a sea of brunch. 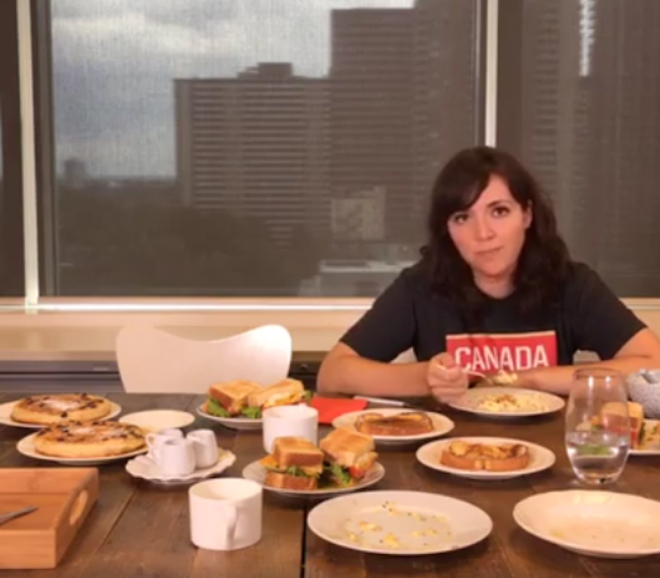 Somewhere in the midst of my experiment.

0:29 Our kitchen team really pulled out all the stops making this meal. I wouldn’t eat Cream of Wheat made by just anyone.

6:53 I’m finished my first plate of French toast and then make my first mistake: following it with a cup of coffee. Liquids were a bad choice so early in the meal, a sentiment echoed by my suddenly critical viewers, who are already goading me to eat faster.

7:38 I flatly admit that I have no eating strategy. I adopt one later on. It is “never sandwiches.”

8:34 I refuse to shy away from very large, unattractive bites. It helped the cause. I regret nothing.

17:12 A well-meaning colleague gives me a back rub to assist with digestion. It helps. 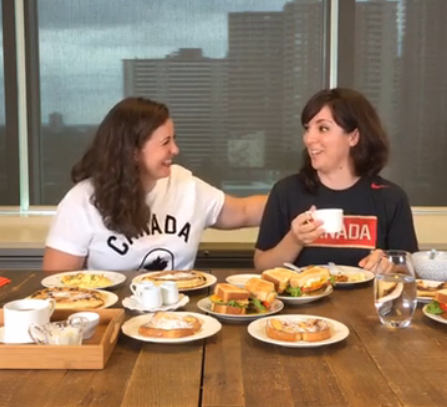 Dominique gives me a helpful back rub.

23:23 I take inventory of what I’ve eaten to bolster my motivation. So far: A slice of French toast, coffee, most of an omelette, half a pancake, a bite of Cream of Wheat and one small jug of maple syrup.

24:00 Cheering from onlookers provokes my anxiety. Where possible, do not eat in front of supportive friends. (Only unsupportive ones.)

30:11 A little fruit — which my coworker, Dominique, rightly called a “palate cleanser” — would’ve been nice. Phelps has integrated more of it into his current diet, along with lean meats and whole grains.

35:10 Breathe as much as possible. Never stop breathing.

51:24 My editor, Lianne, suggests stacking the pancakes and French toast to cut down on the number of plates before me. A good suggestions, but full is a state of mind, and I fear that the height will throw me off.

58:27 “Clear eyes, full stomachs, can’t lose” is a an encouraging mantra — in competitive eating, and life. 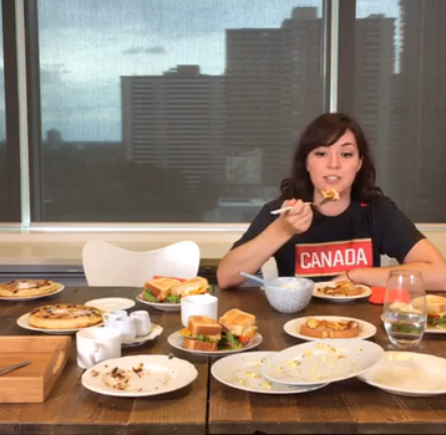 1:02:46 A well-meaning colleague offers me a neck massage to assist with digestion. It does not help.

1:09:49 In every binge-eating contest, a little sweat must fall. This is the mark of a true champion. (Would also recommend air conditioning and not eating under white-hot lights.)

1:25:24 I start to feel very warm, which seems oddly like foreshadowing when, 30 seconds later, the live feed dies. This seems like a logical point to stop eating — after all, I’ve finished two omelettes, two French toasts, a pancake and, regrettably, plenty of liquid. I need a nap, and tomorrow, I will sleep through breakfast.