Olympian Christine Sinclair on how to be a good leader

The soccer captain talks about leading by example and her best power lunch. 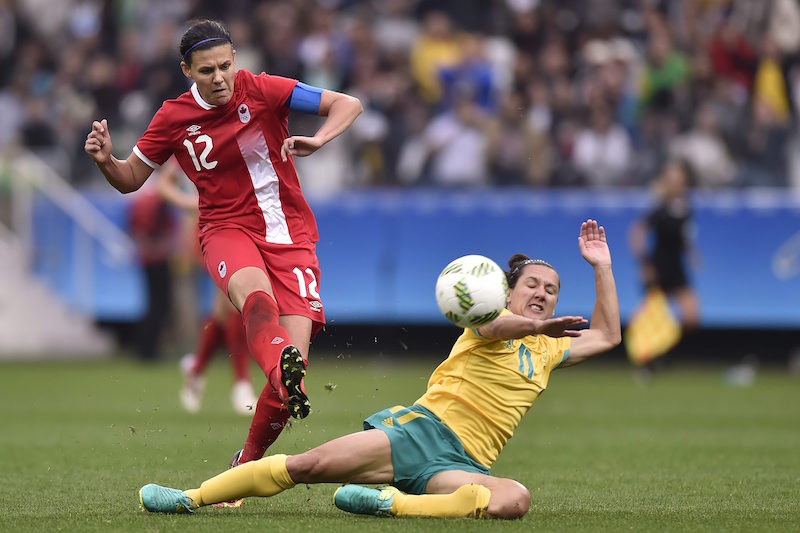 This article was originally published in Canadian Business.

Soccer star Christine Sinclair is many things. To her teammates, some of whom she has known for over a decade, she is merely “Sincy,” a nickname affectionately spoken by players and managers alike. To the group of 12-year-old girls who wait impatiently in the halls of BMO stadium for the chance of an autograph or a selfie, she is nothing short of football royalty. As captain of the Canada women’s national soccer team, Sinclair has scored 153 international goals and climbed the 2012 Olympic podium to claim a bronze medal. While she is best known for her domination on the field, her teammates know her as a quietly confident leader, who knows what to say and when to say it. That’s what they’ll trust her to do in Rio de Janeiro as they look for a second chance at Olympic gold.

You’ve captained the national team for years. What’s your leadership style?
I joke that all I do is do the coin toss at the start of the game and wear an arm band. But, really, on this team we have a bunch of leaders. Everyone leads in their own way. I’m a quieter type of leader. I’ll do anything for my team, and I’ll speak up when needed, but I tend to lead more by example.

What does that involve?
It’s demonstrating work ethic: doing what’s best to prepare, not cutting corners, things like that. It’s just day in and day out doing the right things and what’s right for the team. I tend to respond best to leaders who are just good, quality people, and that’s what I try to be as a leader myself.

But, as you said, you do know when to speak up. Take us back to the 2012 London Olympics, when the team lost a semifinal match due to some questionable officiating, and you famously delivered a speech urging your teammates not to be discouraged.
It wasn’t a situation where I consciously thought, This is important for me to say. It was just a feeling I had inside. As a team, we were completely heartbroken that we lost the chance of getting the gold medal, especially in the fashion it happened. I wanted to remind the team that in two days we would have a chance to win an Olympic medal, and that that’s a once-in-a-lifetime opportunity. I wanted to remind them that it was OK to be mad for a little bit, but that they should also move on and get ready for a chance to get on the podium.

So was your goal to try to get your teammates to take the longer view?
Absolutely. Our goal heading to the London Olympics was to get on the podium. I love the fact that we were so mad we lost the chance for gold that we were going to be disappointed with the bronze medal. But had someone told us at the start of the tournament that we were going to be playing for bronze, we all would have taken that opportunity in a heartbeat. I wanted to put things in perspective.

Related: 20 Canadian women to watch at the Rio Olympics

Would your coach, John Herdman, be a good example of the kind of leader you aspire to be?

How come?
His passion, and his ability to impact every single single player on an individual level, but also [to affect us] collectively as a team. I think that’s very unique. Every day, he brings something new. And after every meeting we have, it’s like, “alright, let’s go play.”

When you say that there’s a lot of leaders on the team, is that something that you’ve tried to foster?
Yeah, absolutely. It’s encouraging the idea that everyone’s a leader on the field. In their own unique way, everyone has a kind of influence with a different group in the team. It’s about giving people the confidence to express themselves.

Ok, I’ve got some lightning-round questions for you. What’s your best sleep tip?
That’s interesting, because I actually am not a good sleeper. Recently, I’ve started a little routine: I have tea now and I read every night before I go to bed.

How do you handle early morning wake-ups?
I’m so not a morning person! So: coffee, lots of coffee. And getting to bed as early as possible.

What’s your go-to power lunch?
I’m a big fan of bowls, whether it’s [based on] quinoa or anything like that. I like add a little Mexican flare to them with spices and stuff.

How do you unplug on your days off?
Believe it or not, I like to golf. On a nice day, I enjoy a round of golf. I also have two young nieces, so if I happen to be in Vancouver, I’m with them.

How do you organize your to-do list?
I have two — one that includes general things that I need to accomplish that don’t necessarily have to be like, tomorrow; they’re things I’ll just get to when I get to them. I also have a second list beside my bed, because I tend to think of things before I go to sleep. As long as I write things down, I’m good.

More:
Lululemon returns with Olympic uniforms and ‘anti-ball-crushing’ pants
Canada’s MMIW will be the focus of a doc backed by Zoe Saldana
Hillary Clinton has turned the U.S. election into a showdown over gender