With four big wins in Rio, the swimmer has made Canadian history. But medals aside, she's pretty much like any other 16-year-old. 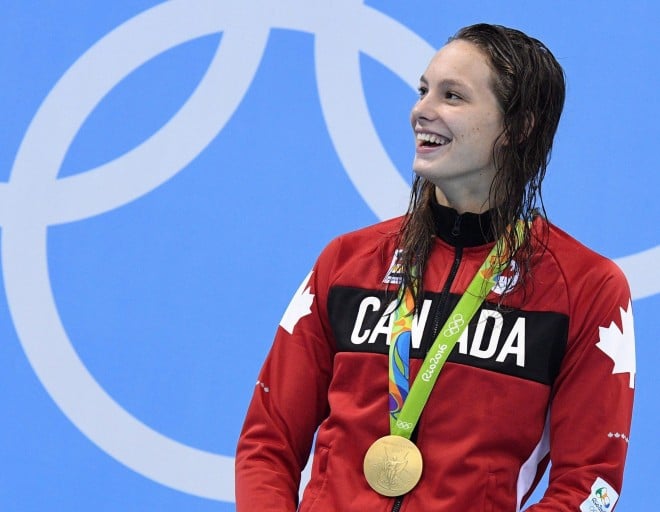 In short order, 16-year-old swimming phenom Penny Oleksiak has become Canada’s golden child — err, teen. Thanks to her splashy victories in Rio, Oleksiak is the first Canadian ever to win four medals in the same Summer Olympic Games, the country’s youngest Olympic medallist and the first athlete born after January 1, 2000 to win an individual gold medal — all mere weeks before she begins the 11th grade. (Let that sink in for a second.) But who is Penny Oleksiak, really? What does she like? What are her dreams? Importantly, where will she keep all those medals? Below, a few lesser-known — and very endearing — facts about Canada’s newest Olympic wunderkind.

Athleticism runs in the family.
The youngest of five siblings, Oleksiak is actually the last of her clan to enter the sports world: Her older brother, Jamie, plays defense for the Dallas Stars; her sister, Hayley, is a rower at Northeastern University; and her mom and dad were both runners.

So does being humble.
In an interview with the Globe and Mail, brother Jamie said, “I think we’ve always kind of done a good job that once we’re in the household we’re just a regular family. She’s just our younger sister — with some Olympic medals.” Her mother, Alison, added, “I’m a little panicked as to how I handle a teenager [with] that resume.”

She’s a Drake fan — and it’s mutual.
When Oleksiak tweeted her dismay at Drake’s sold-out Summer Sixteen show in Toronto, the 6ix God was watching: “Can’t wait to see you when you are back from Rio at a show!” he wrote in an Instagram post.

She’s generous.
Oleksiak plans to donate “probably five to $10,000” of her Olympic prize money, saving some for her parents, who are in the middle of a home renovation.

She has the same end-of-summer plans as most other teens.
On the air with KISS 92.5’s Roz and Mocha, Oleksiak outlined her priorities: “I just want to get home, see my friends, see my dog, catch some Pokemon.”

She keeps her medals in socks.
Some “nice Roots socks.” She doesn’t like wearing all four at once, because “they clink.”

More:
Canada’s winning women in Rio
Olympians are ‘cupping’ to speed up muscle recovery. Does it work?
Women are absolutely crushing the Rio Olympics — and it’s a thrill to watch