We spoke to director Leslie Owen about shooting Gone Missing over the last year in Manitoba. 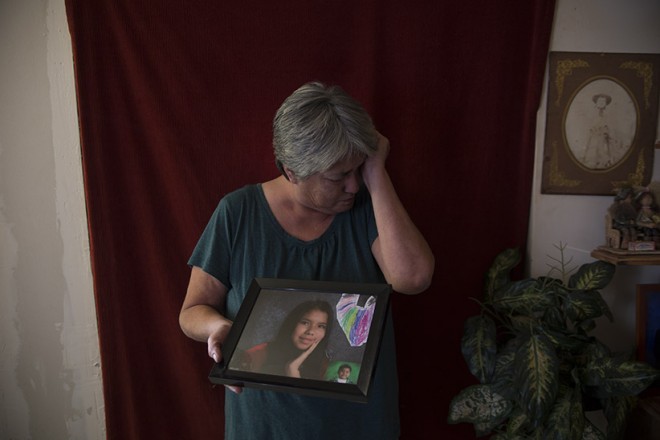 Thelma Favel, holds a photo of her niece Tina Fontaine in Sagkeeng First Nation in 2014. Photo, John Woods for Maclean’s.

The federal government announced the details of its long-awaited inquiry into missing and murdered indigenous women on Wednesday. The delay in official action, the scale of the tragedy and the horrific details that emerged from cases like those in the brutal murder of 15-year-old Tina Fontaine have sparked international interest, including from Hollywood. Actor Zoe Saldana’s production company Cinestar Pictures is in the process of making a feature length documentary about violence against Canadian indigenous women and girls.

Gone Missing will narrow in on three affected families in Winnipeg, including Fontaine’s family. The film is directed by Leslie Owen, whose work includes producing the award-winning 2012 documentary Haiti: Where Did the Money Go?. She’s been shooting in Manitoba over the past year and hopes to complete Gone Missing this fall, for release in 2017.

Owen spoke to Chatelaine about why she wants the world to know about Canada’s murdered and missing indigenous women.

What drew you to the story?

I came across a BBC story last year about the 1,200 missing and murdered indigenous women. At first, I couldn’t really grasp it, how could that happen in Canada? When we hear about this kind of violence happening elsewhere in the world, we’re quick to condemn it, or throw money at it, or send our troops in. But it’s right here, and we’ve turned our backs. So, the story stuck with me and I realized that I wanted to make a documentary.

Related: 5 things to know about the MMIW inquiry

I know you don’t want to reveal too much before you’re finished, but what’s the focus?

Even though this is a national epidemic, it’s impossible to tell a story that large. I decided to focus in on Winnipeg, because Manitoba is in the centre of the country and it has the densest population of Indigenous people both on and off the reserve. It was the best location to get into the story.

That’s interesting because one of the factors that contributes to violence against indigenous women and girls is the legacy of residential schools, along with the current over-representation of indigenous children in the child welfare system. Manitoba, in particular, has had serious failings when it comes to children in care.

One young women whose story I focus on is Tina Fontaine [a foster child from Sagkeeng First Nation who was killed in August of 2014 after running away from a Winnipeg hotel where was she was being housed]. It seems like her story was the turning point. When her body was found, that seems like the moment that this became a truly national conversation. When people beyond indigenous communities said, “enough is enough.”

I don’t want to paint a picture that all child welfare workers are bad, because that’s not the case. But the system is broken and has to be fixed.

Related: What we need to learn from the life and death of Tina Fontaine

There’s often blame placed on indigenous communities. For instance, after a series of suicides in the First Nations community of Attawapiskat, some suggested that the people there should just move. Similarly, when it comes to MMIW, the RCMP, for one, has said the fault lies with indigenous men and that violence against indigenous women is largely a domestic or community problem. Are you addressing that perception in your documentary?

I have met the most resilient, loving and brilliant people working very hard to make change in their communities. I’ve met women who were trafficked, who’ve had guns put to their heads, who were certain they’d be another missing or murdered person and who are now thriving.

Take the Bear Clan in Winnipeg, [a volunteer safety patrol group that looks after children, women and elders, and helps search for missing people]. I have seen the huge difference that this group has made in its community.

Then there’s Leah Gazan [a Lakota activist and academic]. She’s this remarkable woman who is out there stumping for Canada to implement the United Nations Declaration on the Rights of Indigenous Peoples (UNDRIP). She also joined the Manitoba Taxicab Board, after indigenous women reported they’d been threatened and preyed upon by taxi drivers. So what does Leah do? She gets involved to change the system.

Why the Liberals need to get the MMIW inquiry right

Why did you want this story to have an audience outside of Canada?

I think it’s easy from places like the U.S. and Canada to look down at places in the developing world and to be critical of their lack of human rights. Take the South African apartheid regime. Everyone acknowledges how terrible and inhumane it was, but [white Canadians] rarely talk about the fact that the apartheid system was based on Canada’s Indian Act. Violence and racism is happening right here in our own backyards.

It feels to me that Canada is on the precipice of change when it comes to indigenous rights. And I want to rally behind indigenous communities that are part of this movement. They deserve all the happiness, freedom, safety and justice that every other Canadian enjoys.

More:
What to do if you’re being harassed online
Two recent sexual assault verdicts offer hope
Hillary Clinton has turned the U.S. election into a showdown over gender