American health officials say there is "no longer any doubt" that the virus causes microcephaly. 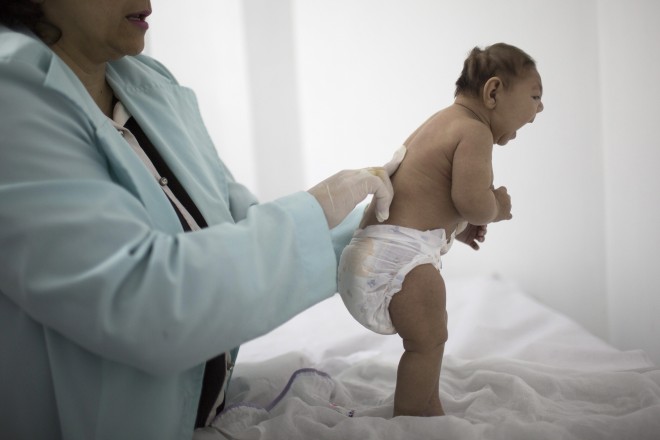 NEW YORK—Confirming the worst fears of many pregnant women in the United States and Latin America, U.S. health officials said Wednesday there is no longer any doubt the Zika virus causes babies to be born with abnormally small heads and other severe brain defects.

Since last year, doctors in Brazil have been linking Zika infections in pregnant women to a rise in newborns with microcephaly, or an unusually small skull. Most outside experts were cautious about drawing such a connection. But now the U.S. Centers for Disease Control and Prevention says enough evidence is in.

“There is no longer any doubt that Zika causes microcephaly,” CDC Director Dr. Tom Frieden said. The CDC said it also is clear Zika causes other serious defects, including damaging calcium buildups in the developing brain.

Among the evidence that clinched the case: Signs of the Zika virus, which is spread primarily through mosquito bites and can also be transmitted through sex, have been found in the brain tissue, spinal fluid and amniotic fluid of microcephaly babies.

The CDC and other health agencies have been operating for months on the assumption that Zika causes brain defects, and they have been warning pregnant women to use mosquito repellent, cover up, avoid travel to Zika-stricken regions and either abstain from sex or rely on condoms. Those guidelines will not change.

But the new finding should help officials make a more convincing case to the public for taking precautions. Some experts hope it will change public thinking about Zika the way the 1964 surgeon general’s report convinced many Americans that smoking causes lung cancer.

“We’ve been very careful over the last few months to say, ‘It’s linked to, it’s associated with.’ We’ve been careful to say it’s not the cause of,” said the CDC’s Dr. Sonja A. Rasmussen. “I think our messages will now be more direct.”

The World Health Organization has made similar statements recently. A WHO official applauded the CDC report.

“We feel it’s time to move from precautionary language to more forceful language to get people to take action,” said Dr. Bruce Aylward, who is leading WHO’s Zika response.

Related: US officials: The more we know about Zika, the scarier it is

The CDC announced its conclusion in a report published online by the New England Journal of Medicine.

Zika has been sweeping through Latin America and the Caribbean in recent months, and the fear is that it will only get worse there and arrive in the U.S. with the onset of mosquito season this spring and summer.

Public health authorities are calling for aggressive mosquito surveillance and eradication, including campaigns to eliminate the sources of standing water in which mosquitoes breed. Those can include flower pots, swimming pool covers, discarded tires and pet water bowls.

The virus causes only a mild and brief illness, at worst, in most people. But in the last year, infections in pregnant women have been strongly linked to fetal deaths and devastating birth defects, mostly in Brazil, where the Health Ministry said Tuesday that 1,113 cases of microcephaly have been confirmed since October.

So far, there have been no documented Zika infections in the U.S. caught from mosquitoes. Nearly 350 illnesses in the 50 states were reported as of last week, all linked to travel to Zika outbreak regions. Thirty-two of the infected women were pregnant.

The CDC report comes at a time when health officials have been begging Congress to approve an emergency $1.9 billion in supplemental funding to fight Zika internationally and prepare for its spread in the U.S. Earlier Wednesday, top House Republicans said they will probably grant a portion of that, but probably not until September.

As the microcephaly cases rose in Latin America, a number of theories circulated through the public. Some claimed the cause was a vaccine given to pregnant women. Some suspected a mosquito-killing larvicide, and others wondered whether genetically modified mosquitoes were to blame.

Related: Zika virus to spread across Americas. Here’s what you need to know

Investigators gradually cast those theories aside and found more and more circumstantial evidence implicating Zika. CDC officials relied on a checklist developed by a retired University of Washington professor, Dr. Thomas Shepard, who listed seven criteria for establishing if something can be called a cause of birth defects.

Among other things, researchers found that the spike in microcephaly in Brazil involved women who were infected with Zika during the first or early second trimester of pregnancy. They also discovered more direct evidence in the form of the virus or its genetic traces.

“In the case of Zika, if you get live virus from spinal fluid from microcephalic kids, that’s pretty damn good evidence,” Shepard said in an interview.

Researchers still don’t have some of the evidence they would like. For example, there are no published studies demonstrating Zika causes such birth defects in lab animals. There is also a scarcity of high-quality studies that have systematically examined large numbers of women and babies in a Zika outbreak area.

“The purist will say that all the evidence isn’t in yet, and they’re right,” the WHO’s Aylward said.”But this is public health and we need to act.”

The hope is that the public will start paying closer attention.

A poll released last week found that about four in 10 Americans have heard little to nothing about the Zika threat.

Even among people who have been following the story at least a little, many aren’t sure whether there is a vaccine or treatment — not yet — or if the virus can be spread through means other than mosquito bites, according to the poll conducted by The Associated Press-NORC Center for Public Affairs Research.

More:
I tried to warn women about Jian Ghomeshi — and it nearly destroyed my life
Q&A: Arianna Huffington on the science of sleep
Memoir: The baby girl I almost had