What if every single woman went on strike for a day?

The organizers of the Women's March on Washington have called for a general women's strike. Here's how it might look, and what similar actions have achieved in the past. 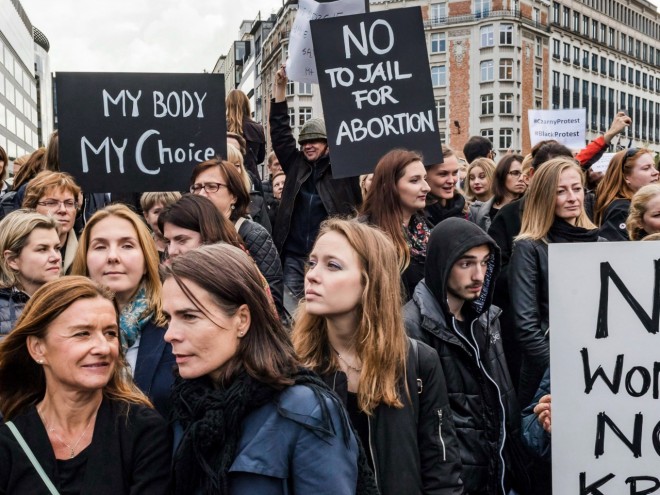 In October, Polish women went on strike to protest draft legislation that proposed a near-total ban on abortion. In the face of this pressure, the Polish parliament voted against the proposed law. Photo, AP Photo/Geert Vanden Wijngaert.

Activists in the United States asked women to show up to defend their rights on January 21, 2017. And show up they did: The Women’s March on Washington is set to go down as one of the largest single-day protests in American history, with half a million people flooding D.C.’s streets, not to mention the hundreds of sister marches around the world, with a turnout of nearly 120,000 across Canada.

Now, as a radical next step in the fight for equality and against the policies of the new Trump administration, the Women’s March organizers in the U.S. are asking women to… stay home on March 8, International Women’s Day. Well, not exactly. It’s more a day to make clear just how much power half the population yields, by abstaining from paid and unpaid work and from shopping, and by wearing red. Here’s a primer on what we know so far — and what a day without women might actually look like.

What’s the point?
Women make up half the population and roughly half the workforce in North America, so if women refused to work or do housework or childcare for a day, it would send a pretty clear message about their political and economic value, says Sheila Block, a senior economist with the Canadian Centre for Policy Alternatives, a left-wing think tank that has studied the economics of women’s work. “If you couldn’t get your kid to school, if you couldn’t see your doctor, if you couldn’t get a coffee at the corner because women weren’t working that day, that would send a powerful message about women’s role in the economy,” she says. The fact that they’re willing to take an unpaid day off work to make their voices heard “would also be a very strong indication of the seriousness with which women are taking these policy and political issues,” says Block.

What would everyone be striking for?
A Guardian op-ed by a group of American women’s rights activists (co-authored by activist Angela Davis, who spoke at the Women’s March in D.C.) that was published in February calls for an “international strike against male violence and in defence of reproductive rights.” They want to see a day of action for “99%” of women — not just the “lean-in crowd”— that will address race and class issues too. With this they joined an already organized International Women’s Strike movement with roots in Argentina and some 30 other participant countries. This movement started in late October 2016 “as a response to the current social, legal, political, moral and verbal violence experienced by contemporary women” and will see women take to the streets protesting reproductive rights roll-backs, violence against women, and repression of minorities and refugees. (Since protests are prohibited in Russia, women there plan to boycott sex on March 8, in an echo of the ancient Greek play Lysistrata.) Critics of the strike make the point that it’s a much greater sacrifice for women in low-paying jobs to take a day off to protest.

Related: 5 ways you can take a stand against hate right now

Could it actually make a difference?
Women’s strikes have a pretty good recent record of success. In October, more than 100,000 women in Poland dressed in black and took to the streets protesting the government’s plan to tighten up already restrictive abortion laws. After seeing this massive turnout spread out over 60 cities, the Polish parliament rejected the draft legislation pushing for a near-total abortion ban. That same month, women in Iceland walked off the job at precisely 2:38 pm — the minute they start working for free, according to the wage gap — to draw attention to pay inequality. October 24 has become a national day of action for equal pay in Iceland, marking the anniversary of a massive 25,000-woman march in 1975, when women didn’t go to their paid jobs or do any childcare. Iceland now tops the World Economic Forum gender gap index with the smallest gender wage gap. There have also been recent women’s strikes and marches in Latin America to protest male violence, and in South Korea and Ireland to defend reproductive rights.

Will Canada participate?
The Women’s March Canadian contingent has not organized a strike. That said, some cities in the Canadian Women’s March network, including Edmonton and Montreal, have expressed interest in the strike. “Women’s March Canada wants to hear from women and feminist organizations in Canada about their priorities and ideas for building this movement across Canada,” the group said in a statement on its Facebook page, adding that they are working on plans to mark International Women’s Day with some kind of action.

More:
I broke my back but hid the pain — how the notion of “hysteria” lives on
Help: When the news is crushing you, but you can’t look away
Soup of the day: Smoky corn chowder with bacon