The Liberal government announced it will build five new shelters on reserves by 2019. But those who work in these communities say that's not nearly enough. 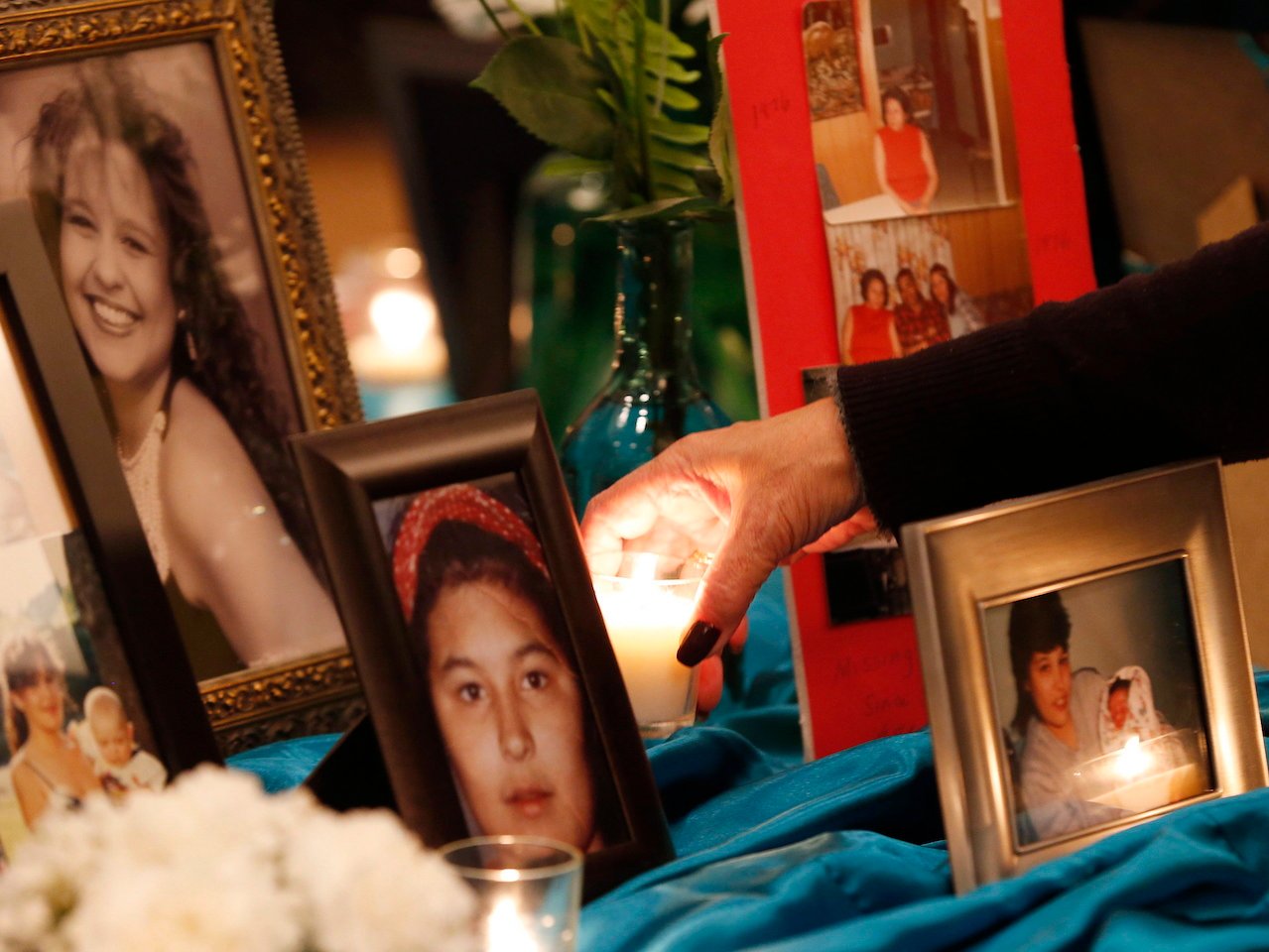 Portraits of murdered and missing women on a memorial table at the 2nd National Roundtable on Missing and Murdered Indigenous Women and Girls in Winnipeg last year. Photo, The Canadian Press/John Woods.

Up to 4,000 indigenous families were glued to the media earlier this month when the five Commissioners for the National Inquiry into Missing and Murdered Indigenous Women and Girls held their first press conference in Ottawa. It was a long time coming. Since the inquiry officially began on Sept. 1, 2016, families have been waiting patiently for public hearings to begin.

Though the inquiry is finally underway, the many urgent needs facing indigenous women and girls across the country somehow still seem to be falling on deaf ears. Some of the requests being put to the government by families and advocacy groups include very basic human needs, like better access to health care, education and clean drinking water. But one of the most pressing — and overlooked — needs is shelters and safe spaces for women and girls suffering from domestic violence.

On any given night in Canada, 3,491 women and their 2,724 children sleep in shelters to escape abuse, while about 300 women and children are turned away because these shelters are already full. Of the 455 women’s shelters across Canada, just five percent serve women and children in indigenous communities. This statistic is especially disturbing given that indigenous women are subject to five times more violence than other demographics in Canada (they’re also six times more likely to be murdered). Between 2004 and 2009 alone, some 48,000 indigenous women reported having experienced some form physical or sexual spousal violence at home (according to Stat Can, that number didn’t change significantly when data was collected again in 2014.)

The heart-wrenching reality facing many Inuit, Métis and First Nations females in Canada (often with young children in tow), is that even when fleeing violence, they have absolutely nowhere safe to go.

If they’re in a city, most shelters for victims of violence are spilling over capacity and seldom equipped to accept more people, let alone victims with unique cultural needs. In rural settings, such as remote reserve communities where violence is rampant, women and children have even fewer, if any, options.

Related: There is a child suicide epidemic in Canada — why is it being ignored?

On the 2015 campaign trail, Justin Trudeau spoke at length about rectifying indigenous women and girls’ inequality and his plan to foster a renewed, “nation-to-nation relationship” and bring about “reconciliation.” And his government did promise $10.4 million in the 2016 budget for the renovation and construction of an unspecified number of new shelters for victims of family violence in First Nations communities, which are supposed to break ground in 2016 and 2017. The budget also promised another $33.6 million over five years and $8.3 million ongoing to support these spaces.

The plan was quickly labeled progressive and “activist” by a some major news outlets. But those who actually work in communities on the ground, outside of ivory towers and offices, know different.

Currently, there are only 39 federally funded shelters that primarily serve on-reserve First Nations communities – an abysmally low number considering that there are over 630 First Nations in Canada, each with their own unique needs. According to the National Aboriginal Circle against Family Violence (NACAFV), indigenous women’s shelters are severely underfunded when compared to shelters serving the broader Canadian population. NACAFV has lobbied successive governments to do more for indigenous women and girls fleeing violence. In September 2016, the organization wrote a letter to the UN Special Rapporteur on Violence against Women, asking for help in urging the Canadian government to close the funding gap for indigenous women’s shelters and invest in more preventative actions such as education.

According to the Department of Indigenous and Northern Affairs Canada, by the end of the Liberals’ four-year mandate, only five new federally-funded shelters will have actually been built across the country. Many, many more than five are needed and, perplexingly, all five of these shelters will only serve First Nations communities. None will serve Inuit women, who are in equal need of additional resources.

Related: What you need to know about Russia’s move to decriminalize domestic violence

Like every government before them, including the Harper Conservatives, the Liberals seem determined to dole out change as slowly as possible (or perhaps not at all). The most common explanation for this stubborn inaction is that government departments like Indigenous and Northern Affairs Canada are slow, inefficient and resistant to change. But indigenous communities aren’t buying it.

Some, including activist and academic Pam Palmater have debunked the budget, calling it a “shell game” because the allotted money isn’t nearly enough to meet the actual needs of indigenous communities. Cindy Blackstock, meanwhile, the Executive Director for the First Nations Child and Family Caring Society, has stated many times that “the problem with incremental change is that change never comes.”

As with First Nations’ child welfare, a file the Trudeau Liberals promised to fix then both fumbled and completely failed on this year, the safety and security of indigenous women and children fleeing violence also seems to have fallen by the bureaucratic wayside.

True, we may have a National Inquiry underway, but the MMIW commission can only make recommendations when its two-year mandate is up in 2019. And even then, it has no power to compel immediate action on the ground. Without public intervention from provincial and territorial healthcare providers, private donors (not that it should have to come to this) or another outside funding source, indigenous women and girls will inevitably stay trapped in this deadly cycle of violence. It’s time to fix this.

Jenn Jefferys is a freelance writer and communications consultant.