Postcard from Washington: The people we'll remember most

In a crowd of almost 500,000 people, the Chatelaine crew found people they will always remember.

The Chatelaine staffers who travelled to Washington to cover the Women’s March found themselves surrounded by inspiring people and stories. Here, they share the people who made the greatest impressions on them, and why. 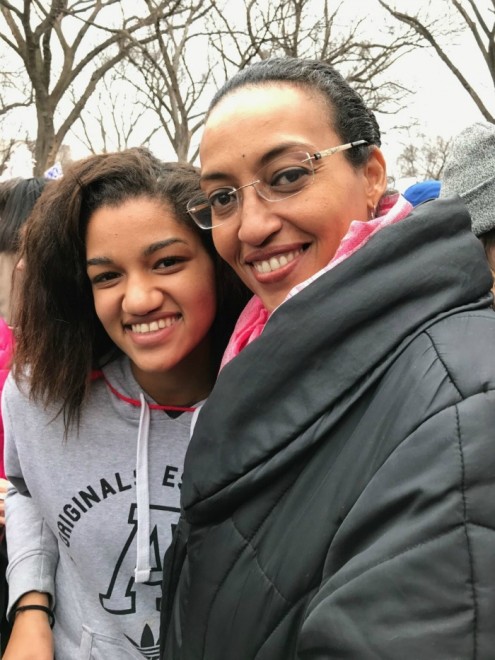 The daughter marching with her mother

Mikal Aaron, 16 convinced her mom, Elsa Gebreyesus, to take her. The pair from Fairfax, VA said they were worried about Trump’s divisive policies but were encouraged by the massive turnout. ‘It has felt so good to be surrounded by people who feel the same way as you,’ said Aaron. ‘It’s not just three and four of my friends in a room talking about what we believe in.’ What was so inspiring about this mother-daughter duo is that not only did they come out to the march, together, but they both brought friends. —Sadiya Ansari, associate editor

The woman waving from the porch
While heading towards the march down a residential street, a lovely lady named Cheryl Yates called out to us from her porch to say hello and wish us well. She was sporting her Million Women March shirt, an event in which she proudly participated 20 years ago in Philly. Although a prosthetic leg held her back from joining us, she was glowing as she waved on the seemingly endless line of marchers behind us. It was a reminder of the women who have put their heart and soul into these issues for generations.  It really set the tone for the day.—Carla Antonio, videographer/video editor 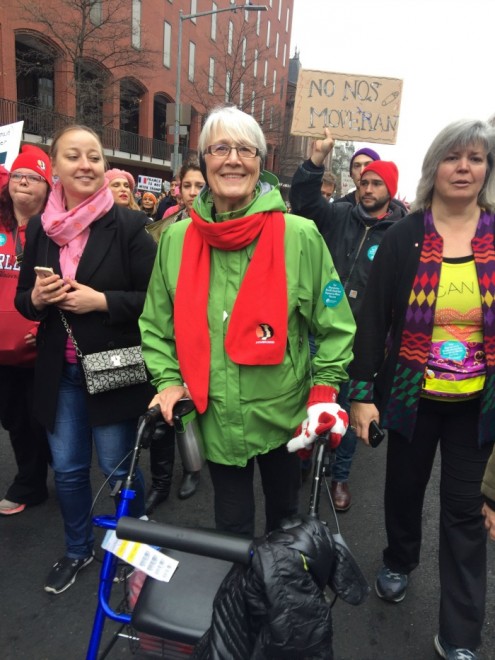 The woman who, despite a bunch of odds, said D.C. or bust

“‘Oh, I’m sorry!’ was the first thing Bev Edwards-Sawatsky said to me. Her walker had clipped my heels as we turned up 17th Avenue, in a throng of people. But I didn’t mind. I was drawn to her determination. Bev had just pushed her walker for miles through downtown D.C. “I’m here to mark my 70th birthday,” she said. She could have stayed close to home, joining a sister march in Kelowna B.C., far closer to her small Okanagan Valley town. But for Bev, it was D.C. or bust. ‘I had a hip replacement on Nov. 9 and had to turn off the election results coverage so I was calm and ready for my surgery,’ she told me. Only after the operation did she become properly ticked off. ‘The rhetoric had just got so awful, I just had to be here today.’ Her life’s work in psychology has been about helping people, and Trump’s rhetoric, she said “attacks everything I value.”She works with refugees in B.C., and said she wants to protect them from hearing all of the negativity directed at them from the most powerful office in the free world. I loved Bev because she was soft spoken, but fierce. She needed to be in D.C. on Saturday. What others might have seen as a barriers to participating — the cross country flight, the hip replacement surgery requiring a walker — Bev didn’t see as barriers at all. I’ll always remember her commitment to making her voice heard.—Sarah Boesveld, senior writer

I was in Washington to film all of Katie Underwood’s Facebook live streams from the march. She talked to many amazing women throughout the day, but it was the last interview that was the most memorable for me. We met three young men who attend Howard University, all wearing their Greek varsity jackets. When asked why they attended the Women’s March, they spoke of their fraternity. They hoped that by simply being visible at the march, that they could lead other men by example. They felt that as leaders in their school community, they have a responsibility to be strong voices for the issue of women’s rights. But it’s not enough just to be seen and heard, they said — their fraternity also does mentorship programs with local schools to teach boys to respect women at a young age. Their presence and their passion was truly inspiring.—Michelle Turingan, deputy editor, video

Kathy, a.k.a my new role model

“When I first met Kathy aboard Bus #3, she was struggling to lift her walker into the overhead compartment. I secretly worried about her ability to march for hours the next day. The second time we encountered each other, as our Canadian contingent came upon the Capitol building, she told me that, at 70, the march was ‘taking a lot out of her,’ but a renewed, white-hot shame over what was happening in the country of her birth, and a frustration that ‘we’re still talking about equal pay’ was enough to get her mobilized. On Saturday, I saw hundreds of kindergarteners being carried on their mother’s shoulders. And right alongside them was Kathy, whom I had grossly underestimated, carrying her walker. Those little girls and I would do well to emulate her grit.”—Katie Underwood, associate editor