'Is that a uterus giving the middle finger?': On the bus to the Women's March

This trip had everything — strangers bonding, ribald humour, a bottomless well of snacks and even a self-appointed bus mom. 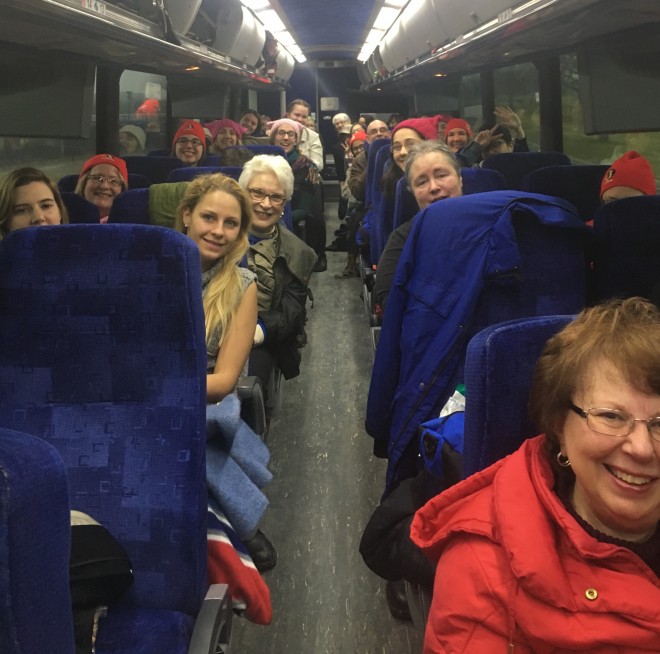 “Where are the dang buses?” Maria Ringo is yelling. She’s standing outside of Toronto’s Union Station, holding a giant sign in the shape of a 3, and would like to put it down. “Is that a bus I see? Is that a bus? It’s a bus!”

It was not a bus — at least, not the one Ringo, a 54-year-old homeopathic doctor was in charge of getting 50 women onto. On the misty inauguration hangover that was Friday night, she and her 12-year-old daughter, Maddy (who was dressed in a onesie and therefore possibly the best-prepared person on the bus), co-captains to the third of five Canadian buses headed to the Women’s March on Washington, combed through the passports of 50 complete strangers. Five cases of water and uneaten boxes of vegan cupcakes flanked a growing line of attendees who made fast friends by, among other things, complimenting each others’ bone structure, as women have sometimes been known to do. (“Has anyone ever told you you look like Natalie Portman?” “Yeah, I’m the chunkier version.”)

They also gushed over each other’s signage. “Can I take a picture of that?” one woman said to another. The sign was a glitter-adorned poster board featuring a cartoon vagina (complete with pink bejewelled clitoris) that read “Pussies Grab Back.”

Related: Why Canadians are joining the Women’s March on Washington

“Yeah, but I have to throw it out,” she said. Maria Ringo had just explained to her that on buses one through five, signs were not allowed.

Women of every walk, size and age boarded bus 3, which ended up being an hour behind schedule. Some were young enough to pull off lip rings, others were old enough to need to stow their walkers. Many were American expats. Three men came aboard, too, including Burt, the driver. For all our differences, what everyone seemed to have in common was a love of neck pillows.

Within minutes of departure, cupcakes were circulating though the hungry, estrogen-fuelled crowd and Maria had settled into her rightful role as Bus Mom. She said lights would dim at 11:30 p.m. She passed around the phone number for Canadian Foreign affairs, in case of emergency. And one more thing: “We must avoid the word ‘protest,’ ” she cautioned. Border guards, we all knew, shouldn’t be messed with. “You can call this a ‘celebration of diversity,’ or a ‘peaceful demonstration,’ ” she said. “But the ‘p’ word is banned.”

Ringo didn’t laugh when one woman jokingly asked whether the march would have “free pot,” or when another loudly offered the entire bus miniature Snickers bars to stress-eat their way through border security. Still, for all of her law-abiding ways, you could tell Ringo wasn’t a square mom — she was a cool one: She made cheeky hand signals like a flight attendant as she walked the aisle counting her charges. She talked enthusiastically about wanting young Maddy to see “democracy in action,” a passion she first realized as the daughter of Vietnam-dissenting Catholic parents. But the laughter stopped when, out of the corner of her eye, Ringo spotted contraband.

Related: Protest city — a diary of inauguration day in Washington

“Lord help me. Is that a uterus giving the middle finger?” In truth, it was a fallopian tube flipping the bird, the specifics of anatomy didn’t matter in the moment. The sign was the brainchild of a 26-year-old neuroscientist named Taryn, who didn’t want to jeopardize the fate of the convoy, but also didn’t seem particularly keen on ditching her masterpiece. (“I mean, it did take me a while to make.”)

“The guy guards won’t even know what that is!” one neck-pillow-wearing woman offered.

“I have a sign, too!” said another, less helpfully.

At that precise moment, after days of schlepping water cases around Toronto and attending to frantic email requests from adult riders who “really want to sit with their friends,” Ringo’s eyes appeared to cave in from exhaustion.

“Let’s just hope the guards think that uterus is a flamingo,” she laughed, though unconvincingly. “And don’t worry, you can come talk to me about any other skeletons in your bags.”

Related: Why I’m joining the Women’s March in Canada
As several riders relaxed with Roxane Gay books and unfinished knitting — or debated which Sex and the City season was “the sh-ttiest” — Ringo went back to the bow of the bus, pulled her evening glasses from her hair to her nose, and let Maddy curl up in her lap.

She had the happy, exhausted look of a woman who knows she’s fighting the good fight. “I’m really hoping my daughter gets an education in what it means to march peacefully,” she said, in an a rare, unharried moment. “I had lots of things I could have done this weekend, but I got on the bus.” She told me about her big “no nukes” crusade in college, the farmers’ rights rallies she attended at Queen’s Park, the petitions she’s signed in the name of clean energy.

“Thirty years ago, at a rally, a reporter asked me why I was there,” she recalled. “And I said that someday, when I had children — that’s you, Maddy! — that I didn’t want to tell them I did nothing when I had a chance to speak up.”

She still gave Maddy a firm maternal nudge when she accidentally let the p-word slip. But in the end bus 3 crossed the border without a hitch, to an edited chorus of “woos.” Most of her Canadian charges got a restful eight hours-worth of sleep. And that lovably vulgar signage was kept safe in its hiding place under the bus seat, so it could be held high in the streets of Washington.

Follow Chatelaine’s coverage of the Women’s March on Washington on Twitter and Facebook — we’ll be sharing live coverage from staffers Sarah Boesveld, Katie Underwood and Sadiya Ansari, who will be attending the march. Or follow them directly on Twitter: @sarahboesveld; @katieunderwrite; @sadiyaansari. Read our complete coverage here.