5 Key Takeaways From The Throne Speech

The Throne Speech lays out the government’s priorities (and catch phrases) for the next parliamentary session—including promises for jobs and continued aid through the pandemic. 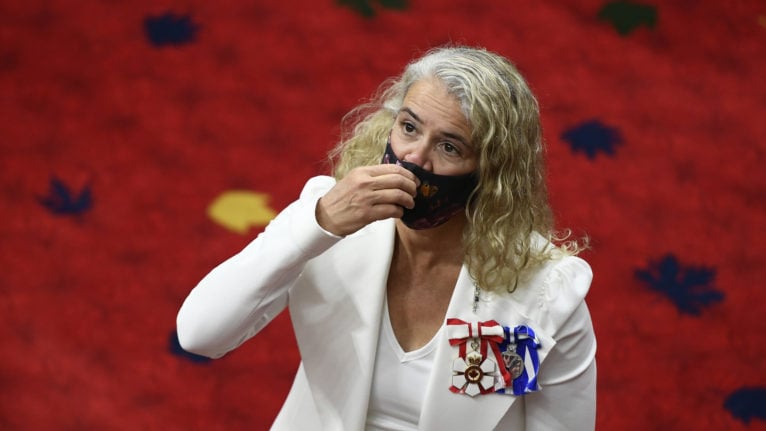 Gov. Gen. Julie Payette watches a livestream of the proceedings before reading the speech from the throne in the Senate chamber in Ottawa, Wednesday, Sept. 23, 2020. (Justin Tang/CP)

Prime Minister Justin Trudeau’s Liberal government unveiled its plan Wednesday for the next steps of a pandemic recovery… and for many, many, many other things.

The Speech from the Throne, delivered by beleaguered Governor General Julie Payette, was presented as a dichotomy between the sweeping Liberal agenda and any number of unspeakable alternatives. “Do we move Canada forward, or let people be left behind?” Payette uttered, the only person in a socially-distant Senate chamber not wearing a mask. “Do we come out of this stronger or paper over the cracks that the crisis has exposed?”

Well, those latter options don’t sound very good. So what is the plan to see us through this awful year? Here’s what you need to know:

1. No panaceas, but plenty of laundry lists

To address the three highest-profile issues of the year—the pandemic, systemic racism and climate change—here’s what the government has to offer:

On the first priority, public health, we have a government promising a laundry list of measures, chiefly an extension of the Canada Emergency Wage Subsidy (though not the CERB) through next summer; direct support to businesses shut by local health orders and a new campaign to create “one million jobs.” There are also promises to increase testing capacity, obtain faster tests, get more PPE and, eventually, secure vaccines. A related measure, in light of the experience at long-term care homes: new Criminal Code amendments to criminalize senior neglect.

On systemic racism in Canada, the headline policy is a promise to introduce legislation and investments that “address the systemic inequities in all phases of the criminal justice system,” along with better civilian oversight of the RCMP and a shift towards “community-led policing.” Liberals also plan to take action on “online hate” and implement an “action plan” to increase representation in the public service. For Indigenous reconciliation, there are renewed promises to invest in clean drinking water, a mental health strategy, new infrastructure and catch-all “additional capacity-building.”

Climate change is less the star of the show than some anticipated. It was theorized the Liberals would seize this year’s crisis as an opportunity for a huge overhaul of the economy towards greener pastures, so to speak. Policy ideas are less all-encompassing than that, and seek to address “extreme risks from climate change,” not just climate change itself. Chiefly: home retrofits, new transit options and a slew of supports for zero-emissions vehicles. Also: a new Canada Water Agency. Oh, and despite the ubiquity of pandemic takeout, single-use plastics are still being banned next year. (Take that, straws.)

Would it truly be a minority government throne speech if the Governor General was not being used as a mouthpiece for civility (despite her own reported workplace incivilities)? Because, dear children—ahem, elected members of parliament—you are being called upon to work together and “meet this crucial moment” as a team. That means taking the high road and not forcing an election, capiche?

Although opposition parties’ foremost desires are not necessarily reflected therein, the speech does an awful lot of work trying to appease Liberal opponents. For the Tories, there is a nod to supporting “manufacturing, natural resource, and energy sectors as they work to transform to meet a net zero future.” For the NDP, there are renewed commitments to national pharmacare: a rare-disease strategy on high-cost drugs, a national formulary “to keep drug prices low,” working forward with provinces and territories that are, ahem, “willing to move forward without delay.” For the Bloc, we have a section celebrating official languages and promising to strengthen legislation to take into consideration “the unique reality of French.”

A nod to “eliminating remaining barriers between provinces to full, free internal trade” will please just about everyone. Especially the Tories, but the Liberals’ own backbenchers, too. Kody Blois, chair of the Liberal Rural Caucus, had recently pointed out in a missive to Canadian news outlets that “it should not be easier for wine producers in Nova Scotia’s Annapolis Valley to get a bottle of our signature Tidal Bay across the Atlantic Ocean than across a provincial border to another Canadian province.”

3. Worry about the plan, not the money

The Throne Speech’s preamble promises “bold action” on essentially everything—health, the economy, equality, the environment. It is generally anticipated that a Throne Speech will contain little detail on new programs or how they will be paid for. It is not even unusual for a government to promise a variety of capital-A capital-P Action Plans in lieu of granular policies. And, well, on both fronts, the federal Liberals have not defied expectations. The speech describes the costs of programs already announced but not of new ones, promising a fall “update” that will include legislation to implement the speech’s contents, and ask MPs to approve the associated dollar figures.

The speech takes pains to emphasize how much worse things would’ve been if the government hadn’t stepped in during the pandemic, and how good the interest rates are these days. Really quite good. Nevermind the growing deficit; focus on “Canada’s fiscal advantage” and how it will “continue to be guided by values of sustainability and prudence.” But also remember: “This is not the time for austerity.”

4. Your favourite catch-phrases, plus those working hard to join them

Perhaps we were expecting too much of the speech’s rhetorical devices after such a strong start, comparing Canadians to “a reed in high winds” that may sway but “will not break” because—stay with me, now—“our roots are firmly in place.”

Alas, it isn’t long before Liberal speechwriters revert to their baser instincts, twice referring to the mercilessly-mocked phrase “the middle class and those working hard to join it.” The newer, more alliterative “Build Back Better” is a five-time winner (and has its own sub-header, in the speech’s written version).

The government is unsurprisingly on board with “She-cession” as a descriptor for 2020, using it alongside measures promised to support women: a “significant, long-term, sustained” investment in early learning and childcare; an “acceleration” of a women’s entrepreneurship strategy and yet another imprecise Action Plan… this one for “Women in the Economy.”

Oh, and if you’re unfamiliar with the “Blue Economy”—if that, in fact, sounds like a branding exercise for the government of Ontario or some such—get ready to hear the phrase again from the red team, because it’s the in-vogue descriptor for “Canada’s ocean economy.”

5. …And the kitchen sink

If nothing else, you can very comfortably accuse the Liberals of trying to be all things to all people. New measures are promised on: disability benefits; handgun bans; rural broadband; two billion trees (still a thing!); Saving the Two Michaels; international development; and making web giants share their wealth. Did we mention affordable housing? Or a sustainable food supply? Or the importance of ranchers?! There is even a multi-paragraph reassertion of “Canadian values.” In a warm-and-fuzzy “what are we about” kind of way, of course, not a “we should quiz the immigrants” kind of way.

Whether the breadth of offerings in the speech—waaay longer than last year’s (twice as long in fact), which came on the heels of the Liberals re-election—yes, that was only a year ago—will be enough to appease other parties is an open question. But the fact such a breadth is being offered at all speaks to a government that wants to seem ambitious despite the myriad challenges it is facing.

There is one major omission, though. The only thing this Speech from the Throne didn’t offer—sadly enough—was a reference to “Spaceship Earth” or anything else astronomy-related, a genuine surprise given what we have come to expect from an astronaut GG. We suppose the year 2020 has been grounding for everyone.