The Weekly Woot: An electric guitar designed for women

St. Vincent designed a rad guitar, a Canadian musical will head to Broadway and other awesome things that happened this week. 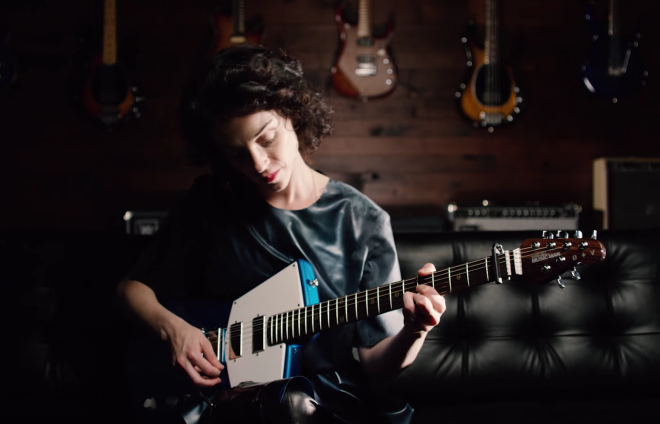 Annie Clark, better known as St. Vincent, worked through nearly a dozen prototypes to create an electric guitar in partnership with Ernie Ball Music Man. She focused on creating a piece that would be amenable to the female form, which means it’s lightweight, slim and tapers at the waist. The guitar will be available in black or “Vincent blue” — a badass bright blue hand-mixed by Clark.

Woot! Saks Fifth Avenue arrives in Canada — with 15,000 pairs of shoes in tow.

The flagship store in Toronto opened Thursday and Chatelaine got a sneak peek, confirming that the space is every bit as luxurious as the brands it carries. And yes, it is the place to go shoe shopping, with 1,000 styles to choose from, including Prada, Manolo Blahnik, Jimmy Choo, Gucci and Balenciaga.

Women on the hockey team from Manitoba’s Baker Hutterite Colony don’t mess around. They outscored the Iron Maidens from neighbouring town MacGregor 6-1 on Monday and on top of that, collected 10 bags of clothing and $400 for two refugee families. All while in traditional gear, including long skirts. “It’s normal for us,” one their players, Tirzah Maendel, told the CBC.

Come From Away, a musical by Irene Sankoff and David Hein, is a runaway hit south of the border. The show has done incredibly well in San Diego, enjoyed sell-outs in Seattle and will make its Canadian debut later this year — all on top of securing a Broadway production for 2017. The play looks at the events of Sept. 11, 2001 from the perspective of Gander, Nfld., where 38 flights were diverted.

Woot! The best listicle to lose yourself in just came out.

Whether you’re pregnant and looking to avoid a popular baby name or just procrastinating writing that end-of-week report, Today’s Parent has the list for you. They’ve collected the most popular baby names across Canada to give you the top 100, including some unconventional picks like Neveah and Colton. Bonus: You can break down the list by province.

WTF! There may be wood pulp in grated parmesan cheese on grocery store shelves.

A Bloomberg investigation found four brands in the U.S. added cellulose in their grated parmesan cheese. While cellulose, which can come from wood pulp, isn’t necessarily unsafe to consume, it’s definitely unexpected. Get a block of the real stuff tonight and whip up a cheesy baked pasta to celebrate authentic Parmigiano-Reggiano.