Trudeau is set to be featured on the cover of a new Marvel comic book in August. But it's definitely not the weirdest thing that's got his face on it.

Back in the 1960s, Pierre Elliott Trudeau’s face was printed on plain paper dresses, a political fashion statement his supporters could wear (then discard) in the run up to the 1968 election. (There were fabric P.E.T. frocks as well.) This generation’s version of Trudeaumania has come with its own swag, but much of it is a whole lot weirder than the mod getups of decades past. Justin Trudeau’s face can be found on just about anything, from shower curtains to dog leashes. Below, some of the more puzzling finds. 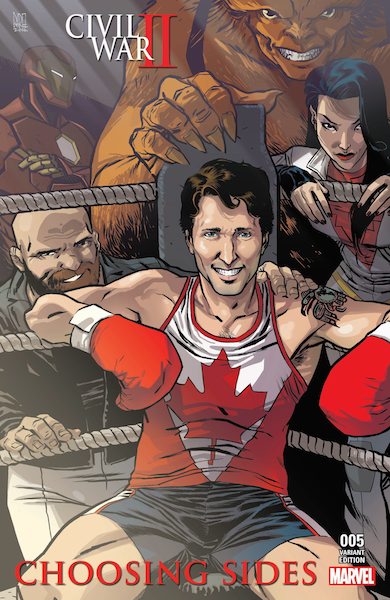 The iconic jawline will soon grace the cover of issue No. 5 of Marvel’s “Civil War II: Choosing Sides,” due out Aug. 31. Justin is following in the footsteps of his late father, Pierre, who was featured in the pages of “Uncanny X-Men” in 1979. Available for pre-order through local comic retailers.

Related:
Exclusive photos of the Trudeaus at home
When Justin met Sophie
Obviously Sophie’s song isn’t hip — it doesn’t need to be