5 ways you can take a stand against hate right now

From self-reflection to community action, here are some ways to combat Islamophobia in your day-to-day life 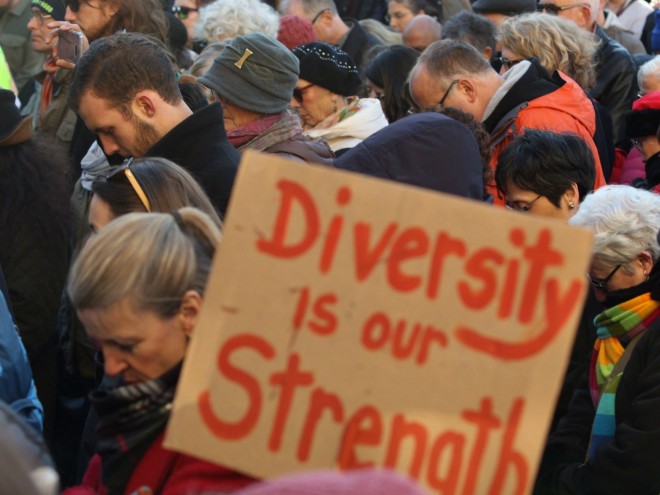 In Victoria, nearly 3,000 people gathered for a vigil following the shootings in Quebec untity. CP/Chad Hipolito.

This week has exposed the depth of Islamophobia that exists in North America. Six men are dead and several more injured after a gunman entered the Centre Culturel Islamique de Québec mosque in Quebec City on Sunday night and opened fire during evening prayer. It happened just days after Donald Trump signed an executive order banning residents of Iran, Iraq, Somalia, Sudan, Syria, Yemen and Libya — all Muslim-majority countries — from entering the United States (an order Prime Minister Justin Trudeau’s government has yet to outright reject). Since the shooting, Montreal police have reported receiving a spike in calls related to hate speech. All across the country, Monday night vigils honoured the lives of Azzeddine Soufiane, 57, Khaled Belkacemi, 60, Aboubaker Thabti, 44, Mamadou Tanou Barry, 42, Ibrahima Barry, 39, and Abdelkrim Hassane, 41, and condemned this terrorist act. From personal accountability to government action, here are things you can do to fight Islamophobia in your everyday life.

Examine your biases and educate yourself
Start with yourself and your own preconceptions, says Farrah Khan, a Muslim activist who works primarily on gender-based violence issues in Toronto. Have conversations with your friends about Islamophobic ideas and how you or people around you might contribute to them, she says. That can be tough, but systemic racism has a way of creeping into our daily way of thinking. Sunday night was not an isolated act. “We have been through a decade with our previous Conservative government and the government before that, that created legislation, policies and narratives which created a culture of fear shame and blame around Muslim communities,” says Khan. There was Bill 94 in Quebec back in 2010, the first piece of legislation in North America to ban face coverings from being worn in public and government buildings, and the Charter of Quebec Values three years later, which took this idea even further. (Neither piece of legislation passed into law.) In early 2015, the Zero Tolerance for Barbaric Cultural Practices Act was passed, criminalizing forced marriage and barring migrants who practise polygamy from entering Canada. While sanctioning these acts seems to make sense, casting them cultural stigmatizes people whose culture is assumed to be in question. (Critics were also concerned that it will wind up punishing rather than protecting women.)

Call out Islamophobia when you see it – online or in person
It’s easy to be a bystander, and harder to be an ally. But try, says Khan. You can always report harassment on Facebook or Twitter, even if the comment isn’t directed at you.

Reach out to newcomers in your community
“This message is not just to non-Muslims,” says Canadian Council of Muslim Women Executive Director Alia Hogben. “There’s a responsibility of all citizens to reach out to each other.” Community connections can help people find jobs and open businesses, which is crucial to community health and survival.

Find local opportunities to get involved
A Quaker woman who lives near the U.S. border called Hogben this week, offering to meet any Muslims in Canada concerned about going over the border — a “touching” gesture of solidarity, Hogben says. There are plenty of other ways to get involved — maybe a local mosque is looking for volunteers, for example, and it’s always helpful to make donations. (A GoFundMe account to support the families of the attack in Quebec has been set up.) Express support and concern to people individually, but be mindful of their needs. “There are some people who have reached out to me and asked me how I’m doing and sometimes I don’t want to answer — I’m not in the space to speak with you right now,” says Khan. Make a conscious effort to be more inclusive of other people’s viewpoints and experiences, in general.

Demand action from your Member of Parliament
Your local MP was elected to represent your interests, and is obligated to respond when you call for action. Since the weekend, Canadians have been writing and calling their MPs to demand the suspension or revocation of the Safe Third Country Agreement, which came into effect in 2004 (the agreement denies people making refugee claims at the border if they landed in either Canada or the U.S. first). A draft letter to your MP can be found here, by way of the Feminist Killjoy Collective.

So far, Canada has not reversed the 2004 agreement, nor expanded its refugee program (despite pressure from the New Democratic Party). MPs spent more than four hours Tuesday night in an emergency debate discussing what Canada can do to fill the gaps that exist due to Trump’s executive order.