Spring Forecast 2019: What Environment Canada Says About The Return Of Warm Weather

Is it just us, or does it feel like winter will never end? Here's what to expect for spring. 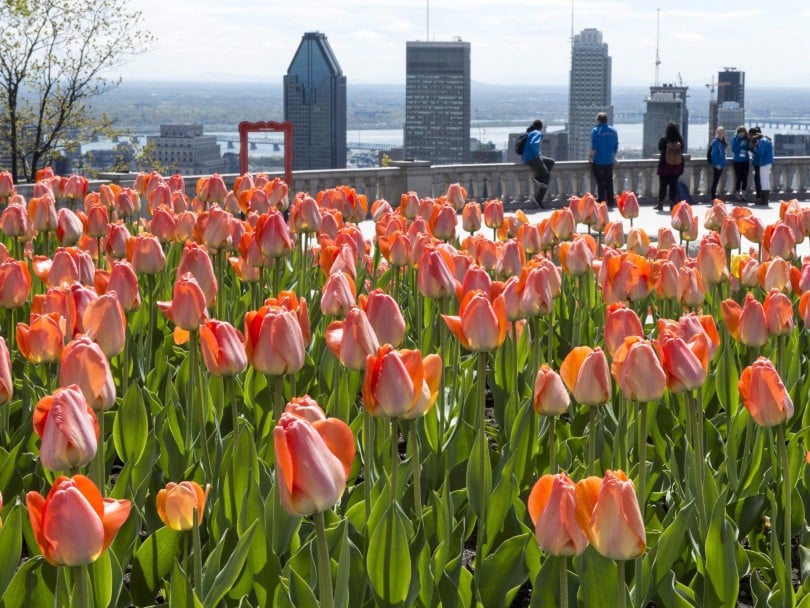 A bed of tulips in Montreal. (Photo, The Canadian Press/Paul Chiasson)

When making long-term forecasts, Environment Canada looks at global patterns such as those of persistent jet streams and El Niño. (El Niño—warmer-than-average eastern tropical Pacific ocean temps—typically occurs every two to seven years. The last El Niño, in 2015-2016, was blamed for record high temperatures in Canada.) Weather signals are easier to read when El Niño temperature anomalies are more extreme, because meteorologists can base forecasts on historical El Niño activity. But, Cheng says, “Right now, we are in a weak episode of El Niño.”

While there are limitations to long-term forecasts, meteorologists at Environment Canada are still able to generally predict seasonal temperatures using use three categories to talk about temperatures—“below-normal,” “near normal,” and “above normal.” (Their predictions are based on 30-year historic averages, so currently normal is based on temperatures from 1981 to 2010.)

“For the next three months, we’re expecting temperatures will probably be a little below normal for eastern parts of Atlantic Canada,” says Hubbard. For Newfoundland, Prince Edward Island, Cape Breton and the rest of Atlantic Canada, the temperature will be mostly normal. The start of March will see slightly above-normal precipitation levels for eastern parts of Newfoundland, southern Nova Scotia, and southern New Brunswick. Afterwards, it looks like a long-range forecast of near normal for the rest of the spring (note, however, that precipitation is harder than temperatures to accurately predict for long periods of time).

February was extremely cold, and unfortunately, MacDonald says there will be ongoing colder-than-normal conditions up to at least the day spring begins (which is March 20 this year). “There is a large trough [low pressure in a jet stream, which can cause long stretches of the same type of weather or lead to more extreme weather] and it has been dominant over western Canada since the very beginning of February. That’s allowing the cold to sink down from the north—what some people have been referring to as a polar vortex,” he explains. “But by the third week in March we will be inevitably be experiencing the normal higher temperatures in that time of year because the days are getting longer and the sun angle is sharper.”

Overall, Ontarians can expect warmer-than-normal temperatures for the next three months. Cheng adds that we won’t be able to pinpoint when spring weather will come for sure until about mid-March, because “we’re still stuck with mostly below-normal temperatures the next little while.” In Ontario, the jet stream patterns have made this winter stormier than usual, which he says makes flooding a valid concern. “If we get a really intense warm up, that’s not good. We want snow melt to be gradual,” he explains. For now, though, the province is still colder than average.

Just like in B.C., the persistent jet stream pattern allowing cold air to sink into western Canada indicates lower temperatures than usual until mid-March or the beginning of spring. Due to the weak El Niño, MacDonald says there isn’t a clear signal for what the weather will be like in April and May.

“For the first couple of weeks of March we’re expecting colder temperatures than normal, but for the rest of March and probably April and May, the forecast is high in terms of temperature,” says Parent. Cold temperatures in the next two weeks also indicates less precipitation. While the upcoming warmer than usual weather is enviable, Parent says it sounds like a drastic change. Combined with other factors, an extreme weather shift could impact the flooding season so, like in Ontario, keep an eye out for regular updates regarding how thawing snow will affect your area.

MacDonald says that based on various international climate models—including Environment Canada’s—there is a fair probability of a warmer-than-normal spring across Yukon.