After playing 300 matches against each other, an NYC rapper and a Florida Octogenarian met in real life for the first time last week. 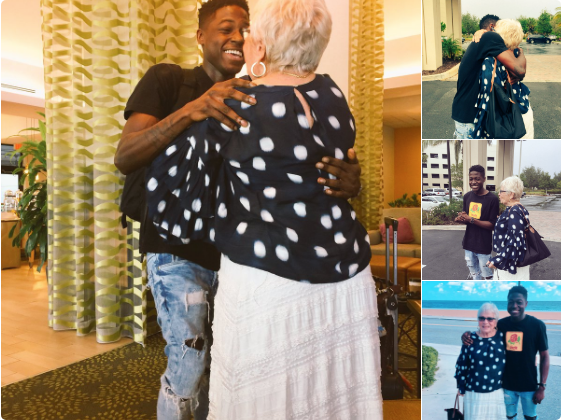 It all started with the word “phat” — just a four-letter play laid down by 81-year-old Floridian Rosalind Guttman on the virtual Scrabble-like game “Words With Friends” back in the summer of 2016.

The word — slang for “excellent” (usage: “the bass was phat”) — impressed her randomly assigned opponent, a 22-year-old rapper and hip-hop producer from New York City, who was, at that point, a stranger. Spencer Sleyon messaged her to ask how she knew that word (apparently she just guessed it), and they kept playing and chatting over time until a phat little friendship blossomed between the two.

And last week, the unlikely pair finally met for the first time in Palm Beach, putting faces to the relationship they’d developed over the course of more than 300 matches on “Words With Friends.” Sleyon posted photos on social media of the two of them hugging and smiling like old buddies.

The duo have warmed hearts all over social media: Sleyon’s Friday tweet about their meet-up went viral — it’s been shared 240k times and liked by more than 1-million people.

“She is hilarious and fabulous,” said Sleyon’s friend Hannah Butler, who accompanied him on the trip. “She’s like a character on The Golden Girls.”

“From day one I knew I was playing an old white woman,” Sleyon told The Washington Post. Guttman wouldn’t give an interview, but her comment, shared through an intermediary, was quintessential old lady badass: “She doesn’t know what all the fuss is about…” the Post paraphrased. “[T]his is just how people should be toward each other.”