6 Takeaways From The Saskatchewan Election

Canada has a new one-party province, the NDP's struggles go on and other results of voting day on the Prairie. 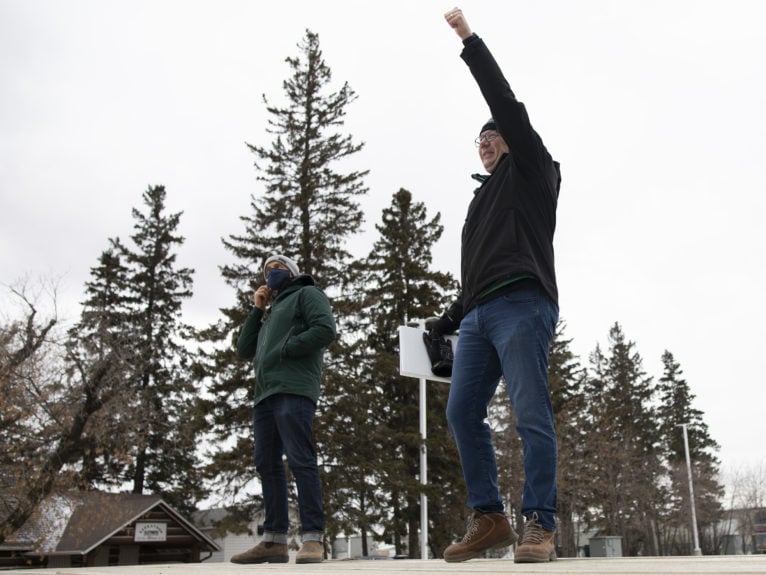 Saskatchewan Party Leader Scott Moe speaks to a crowd of supporters during ‘The Big Honkin’ Rally for a Strong Saskatchewan event at Prairieland Park in Saskatoon on Friday, October 23, 2020. (Photo: The Canadian Press / Kayle Neis)

At publication time, Moe’s party was declared the winner or leading in 50 ridings, to the New Democrats’ 11, easily surpassing the 31 required for a majority. The governing party had, for the third straight time, more than 60 per cent of total votes and double the total of its opponents.

Moe’s NDP rival Ryan Meili claimed he was gunning to replace Moe, but polls pointed all along to a blowout as sure as Saskatchewan is flat. Media outlets only waited just 38 minutes after the polls closed to declare the outcome; at that point, only one seventh of ballot boxes had been counted.

In his victory speech, Moe hailed his “big honkin’ election win,” in reference to the pandemic-friendly car rallies his campaign called “big honkin’ rallies.” And he fired a warning shot over the bow of the Trudeau Liberals, promising to defend Saskatchewan’s interests against Ottawa, and to maintain his rock-ribbed opposition to a carbon tax.

Some takeaways from the historic win:

Alberta’s Tories ruled for 44 years; Ontario’s led for 42. The Saskatchewan Party have a mighty long way to get that far—they’ll be in power 17 years by the end of their newly secured fourth term—but Monday’s victory shows the party belongs in the conversation about right-leaning dynasties in Canadian provincial politics. This was Scott Moe’s first try at the helm of the group that Brad Wall led to three straight majorities, and the unremarkable Moe picked up right where his charismatic predecessor left off, with another no-doubter landslide, and by far the longest current win streak of any Canadian government.

Moe and company stood to actually nudge up their majority by a couple of seats, and will once again have more than twice as many as the NDP. That party (and its previous incarnation, Tommy Douglas’ Co-operative Commonwealth Federation) ruled Saskatchewan for 47 of 63 years—until Wall, Moe and their fellow party members started their own dynasty. They have now established themselves as the provincial ruling class and a donor magnet (corporate and even out-of-province giving is still allowed), while reducing the NDP to perennial opposition by utterly dominating rural and small-town ridings. Those constituencies comprise 35 of the legislature’s 61 seats, compared to only 26 for Regina and Saskatoon combined.

The Sask Party, whose colour is the same green as the province’s much-worshipped CFL Roughriders, has proven its stranglehold over provincial politics can easily outlive Wall. This contest was never in doubt; nor was the expectation that whatever Moe promised was bound to become government policy. So it goes in a one-party province.

Moe is ho-hum, and that will do

Brad Wall’s follow-up act had impossibly big shoes to fill. The three-term premier blended an aww-shucks charm, boosterish zeal and a dazzling rhetorical style; Moe has the aww-shucks demeanour down, but the comparisons end there. The current leader, a former farm equipment salesman, has attempted to talk tough in his campaign monotone: he once warned Justin Trudeau to “just watch me” on the carbon tax, and peppered his election speeches with constant references to a “strong” economy, “strong” party and “strong” province.

Thus far, Moe has shown little interest in governing differently from Wall, extending a keep-the-momentum going suite of campaign promises, including some populist middle-class offerings like an electricity bill rate cut. There’s a home renovation tax credit, as well as new urgent-care facilities in Regina and Saskatoon, to keep some footing for his party in the province’s cities.

That’s a decent amount of spending for a province already facing high deficits, but Moe’s program looks tightfisted compared to that of the NDP. He faced heat during the campaign when a 1994 impaired driving charge came to light—the second unearthed from a past that also includes a third incident, a 1997 car crash that killed a woman (Moe has said he was not drinking before the fatal collision). But with some contrition, he weathered that storm.

He also took heat for tweeting a picture of himself shopping without a mask on (contrary to public health advice), but his NDP rival had been unmasked in a store, too.

Moe doesn’t seem to aspire to greatness. With the Saskatchewan Party, being good enough is more than sufficient to win.

The NDP barely hanging on, again

The party of titans like Douglas, Allan Blakeney and Roy Romanow has featured a rotating cast of also-rans during the Saskatchewan Party’s reign, and the rut it’s in appears to be getting deeper. Meili was the fourth NDP leader in as many elections, and was in danger of becoming the fourth straight to fail to win his own seat in the legislature. After in-person votes were counted, he was trailing his Sask Party opponent by 83 votes, though up to 1,656 mail-in ballots issued for the riding must be tallied before the outcome is known. A loss would leave the opposition party starting yet again at square one.

“This not the end,” Meili told supporters. “This is the beginning. Do not give up. I believe this is going to be the strongest opposition this province has seen in years.” He said this when the NDP was elected or leading in 15 ridings, before four slipped away as the late counts trickled in. The NDP’s current standing is roughly on par with its lousy performances in 2011 and 2016.

An unprecedented number of mail ballots issued during the pandemic may be the NDP’s last, best hope of clawing back some wins: the top 20 seats for mail-in requests were all in Saskatoon and Regina, where the New Democrats are most competitive. Counting postal ballots begins on Wednesday, two days after the election, and the results may not be firmed up until early November.

With Meili, the party was trying something different, something bolder. Its past leaders took a centrist, gentler line of attack against the popular Wall; Meili, a former doctor who was arrested at the 2001 anti-globalization protests in Québec, comes from the NDP’s activist wing. He swung hard by alleging Moe had a hidden agenda for “austerity” cuts, and played to his side’s base by pledging a wealth tax and $15 minimum wage, alongside various spending hikes. He aimed to come across as more of a steady Opposition leader than a political firebrand, but appears to have resonated only with a portion of urban voters.

Ghosts of the past can’t haunt Saskatchewan forever

Meili spent much of the campaign attacking the Saskatchewan Party’s record, and Moe repeatedly returned fire, even if the NDP government the premier was slagging lost power 13 years ago. This was a mainstay of Wall’s campaign rhetoric, warning about the days of a sluggish provincial economy and past rural hospital closures.

The criticism came across as stale, especially given that the once-dominant Saskatchewan NDP government wasn’t some kind of one-and-done experiment like the oft-reviled Ontario NDP of 1990. Fearmongering about the bad old Roy Romanow days may not faze new voters come the next election in 2024: they were in diapers the last time the NDP ran Saskatchewan.

Although Saskatchewan is partially exposed to the oil price crash that has ravaged Alberta’s economy, Moe’s province actually isn’t doing too badly—it now boasts Canada’s lowest provincial unemployment rate, at 6.8 per cent. That’s in part thanks to the strength of Saskatchewan’s trusty old farming sector, but also because the province was among the first to reopen during the coronavirus crisis, and hasn’t been hit as hard as other provinces, with only 25 deaths and cities that have largely avoided outbreaks.

Moe didn’t necessarily enjoy a COVID bump, but nor did he suffer from crisis mismanagement complaints or economic doldrums. And nobody could accuse him of an opportunistic election call (as was the case in New Brunswick or British Columbia): Moe dropped his writ on Saskatchewan’s fixed-election timetable.

This was as neutral-state an election as you could possibly ask for in 2020, when the only campaign rallies on either side were drive-in, horn-honking car-and-truck affairs.

A third party rises in rural Saskatchewan, on the far right

A pro-separatist Buffalo Party came out of nowhere, posting distant yet respectable second-place showings in a handful of rural ridings. They are, on the whole, constituencies that the Saskatchewan Party dominate, where voters would rather eat their ballots than vote NDP. The new party only registered itself in March, and changed its name from Wexit Party in June. It fielded just 17 candidates yet pulled more than 10 per cent over the vote in seven of them, which is much better than a typical fringe party’s showing.

The party stems from the Alberta-based, furiously anti-Ottawa Wexit movement, but the official stance is to demand an independence referendum, not necessarily pull Saskatchewan out of Canada (where it would, one assumes, desperately seek to link arms with a theoretically separate Alberta). The party’s best showing was 26 per cent of the vote in Estevan, a capital of the province’s beleaguered southeastern oil country, as well as 20 per cent in Cypress Hills, along the southwest boundary with Alberta.

Saskatchewan Party trounced the Buffalo candidates in every riding where they competed. Still, whether this a protest vote or a genuine peal of pro-separatist frustration, expect Moe to feel compelled to respond to it. He’s taken openly aggressive postures against the Trudeau Liberals. This may prompt him to crank the dial to 11.