Plenty of Canadians just aren't carrying cash — which could be hurting charities that depend on your change. 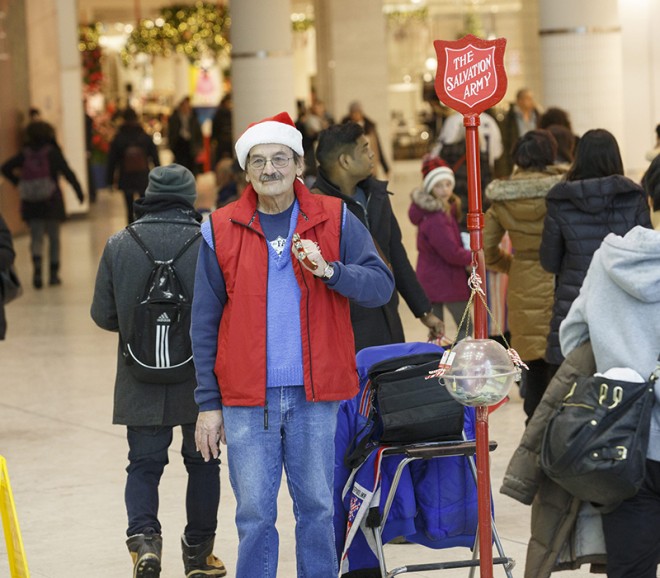 Fred Bihun, a volunteer with The Salvation Army, collects donations inside at the Eaton Centre in Toronto on Thursday, December 15, 2016. The Salvation Army says the move to a cashless society is hurting its annual kettle campaign. (Michael Hudson / The Canadian Press)

For many of us, bank card technology has been a godsend.  Why root around in your purse for cash when you can pay with a tap of your card?

By recent estimates, Canada will be a primarily cashless society by 2030. But the shift from hard currency is coming at a cost to charities.

The Salvation Army kettle campaign, which has had bell-jingling volunteers collecting cash donations in public spaces across Canada since 1902, says it’s behind where it was this time last year, just two days before its Christmas Eve deadline.

They’re still waiting for all the donations to be counted up, and hope to reach their goal. But part of the problem, says spokesperson John McAlister, is that Canadians are just not carrying cash.

“It has a huge impact. There’s the simplicity of going cashless and just having your card, but for people who might want to give or support through a charity or just to a person on the street, it’s pretty hard to give your bank card.”

The shortage of donations has the Salvation Army “very nervous,” McAlister says, because the kettle funds go to the Salvation Army’s local chapters, which support food banks and after-school programs. “Even a few dollars short can have a huge impact.”

The charity was behind on its $21 million goal just before last Christmas too, but managed to surpass it by raising a million more by January. The slow and gradual move towards a cash-free society affected them last year  too, McAlister says.

That’s not to say people aren’t donating during the holidays — they’re just doing it differently, and organizations like the Salvation Army are working to adjust to this change in consumer behaviour. They’ve brought the kettle campaign online, and have a text donation option (text HOPE to 45678 from your phone, and a $5 donation will be added to your monthly bill). These new tools are not only cashless, they take less time.

“I think we have to make it as easy as possible,” McAlister says.