Men freak out at the idea of being a (virtual) woman

The developers of the video game Rust decided to randomly assign attributes to characters like gender, prompting extreme reactions from male gamers. 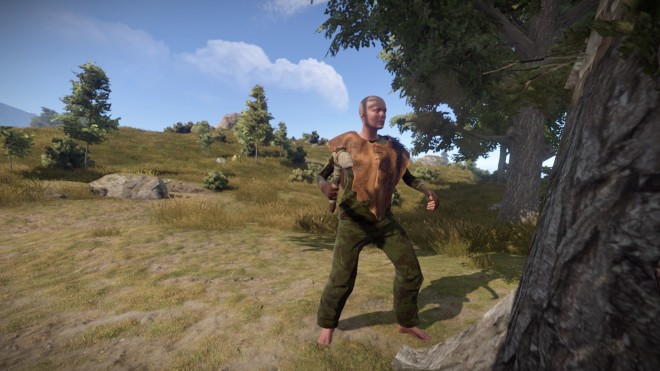 Rust is both a multiplayer videogame and a social experiment. Naked cavemen-like characters are dropped into a dangerous, survival-of-the-fittest world, and players must build shelters, craft tools and weapons and hunt for food — all the while deciding whether to band to together with other players, or kill them.

When it first launched in 2013, every single character was white and male. Last year, developers began to randomly alter the physical characteristics of players, like their skin colour, height, limb length and (seriously) penis size. Players don’t have a say in this and have to accept the appearance of their character, as it is assigned — preferred penis size or not.

Now, in an update that’s just gone live, developers have begun adding women protagonists to the game and randomizing players’ genders. Your character is made male or female — like it or not — and even when a character is killed and reborn, he or she will look the same.

Depressingly and predictably, some Rust players are outraged. A typical complaint runs something like this: “Dear rust i am very upset with this new update i would like to change my gender to male but it wont let me. Please let me change my gender because i don’t wanna be a F–KING WOMEN for the rest of my life on rust.” And that’s mild. Reddit has taken down dozens and dozens of sexist and racist posts on the subject. A moderator explained, “The reason why we’ve removed so many comments in this thread is because certain users don’t know to have a civil discussion without resorting to threats, harassment and insults.”

To be fair, there are lots of men happy about the update, or at least not troubled by it. There are also some dudes who don’t mind being a female protagonist, but who just wish they were hotter. (Could we call this…a baby step for progress?)

For female gamers, of course, having a gender not of your choosing is nothing new. Just around 15 percent of games have playable female characters and those that do tend to receive only about half the marketing budget of male-centred games. Demand and demographics are not the problem. Half of those who play games are female and the women over 18 make up the fastest growing group of gamers. Even still, when it comes to selecting a protagonist very few developers are designing characters for women.

A year ago, a 12-year-old fan of the smartphone game Temple Run wrote an op-ed protesting the fact that she had to pay to play as a female character, while male ones were provided for free. When she researched 50 other mobile games, she found that only five offered free female characters. In gaming, as in so much of popular culture — films, music, TV — the power is held largely by white guys, and so they become the default protagonists.

All of which makes the decision by Rust’s developers to randomize its players’ gender radical and important. In order to overcome the sexism and racism in gaming, those who create games need to make the push themselves. Rust’s creators acknowledge the frustration that many female gamers feel by having to always play as men. And in response to all those angry men now playing as women, the developers wrote on their site, “We understand that you may now be a gender that you don’t identify with in real-life. We understand this causes you distress and makes you not want to play the game anymore. Technically nothing has changed, since half the population was already living with those feelings.”

Maybe being forced to be female character will make men better players. Because if anyone knows how to survive in a hostile environment — like, say, the gaming world at its ugliest — it’s women. As one male gamer wrote on Reddit, the only thing bothering him about playing as female “is all the creepy rape comments I get.”

More:
10 amazing Canadian women whose stories you need to know
Q&A: Arianna Huffington on the science of sleep
Memoir: The baby girl I almost had