Police say there is only one suspect now, and media reports have identified him as Alexandre Bissonnette. 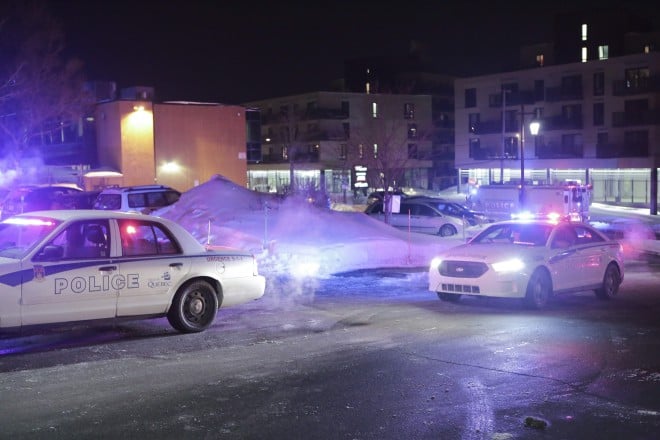 Six people were killed and 19 others were injured in the Sunday night shooting at the Centre Culturel Islamique de Quebec in Quebec City’s Ste-Foy neighbourhood.

Quebec provincial police say following their investigation, only one of the two people arrested in connection with a deadly shooting at a mosque in Quebec City is considered a suspect. Police say in a tweet that the second person is considered a witness, but they did not name him. Police said earlier they had arrested two suspects, who were identified as Alexandre Bissonnette and Mohamed El Khadir, but multiple media reports have now identified Bissonnette as the lone suspect.

The shooting took place just before 8 p.m. Sunday, as many had gathered at the mosque for evening prayers. Witnesses described chaos as mosque attendees scrambled to find friends and loved ones, while police responding to the scene called for backup.

The six people killed in the attack were between the ages of 35 and 60. Their identities have not been released. Nineteen people — all male — were injured in the attack. Five remain in hospital in critical condition while 14 have been treated and released.

“The inquiry is ongoing to determine the motives,” said RCMP Supt. Martin Plante .”It is too early to determine what charges will be laid.”

Prime Minister Justin Trudeau and Quebec Premier Philippe Couillard have called the shooting a “terrorist attack.” The mosque targeted in the attack issued a statement of thanks on its Facebook page late Sunday for the many messages of compassion being sent its way.

It has been the subject of threats in the past. Last summer, a gift-wrapped pig’s head was placed at the entrance to the building.

Vigils are expected to be held in Montreal, Quebec City and Halifax today.

A number of Canadian Muslim groups have expressed shock and anger at the attack. “Quebec Muslims are frightened right now,” said Haroun Bouazzi, president of AMAL-Quebec, a Muslim human-rights group based on Montreal. “We are urgently waiting for answers as to how and why such a tragedy could occur.”

The mosque shooting has also drawn international outrage. French President Francois Hollande has condemned what he called an “odious attack” while a spokesman for German Chancellor Angela Merkel calls the shooting “despicable.” Pope Francis offered his condolences and called for mutual respect among people of different faiths. In a telegram, he said he is praying for those killed and injured, as well as those who responded to the bloodshed.