The Duke of Edinburgh was laid to rest on April 17 after 73 years of marriage to Queen Elizabeth II. 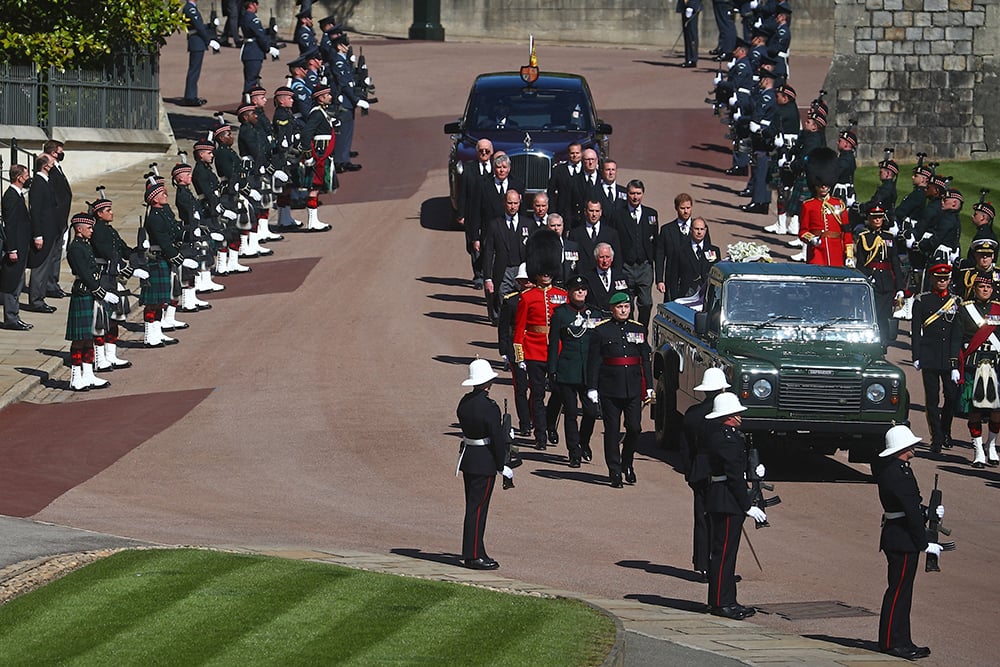 A modified Land Rover hearse carries the coffin as members of the Royal Family follow behind during the ceremonial funeral procession of Prince Philip, Duke of Edinburgh to St George’s Chapel in Windsor Castle in Windsor, west of London, on April 17, 2021. The Queen in her Bentley is at the end of the procession. (Photo: Hannah McKay / Pool / AFP via Getty Images)

Seven decades of marriage to the Queen came to an end on April 9, when Prince Philip, Duke of Edinburgh, 99, passed away at his home in Windsor Castle, where his mother, Princess Alice of Battenberg, was born in 1885.

He was laid to rest with a moving procession and funeral service—full of meaningful songs, hymns and prayers—at St. George’s Chapel, where many royal milestones, including the Queen Mother’s funeral in 2002 and the Sussexes’ wedding in 2018, have occurred throughout his service to the monarchy. He was the longest-serving consort to any British monarch, described by the Queen as her “strength and stay” throughout her long reign.

“He has died the way he lived, with no fuss or bother,” Alisa Anderson-Cole, a former press secretary to the Queen, told NBC News on Saturday. “Prince Philip has probably got the kind of ceremony that he would have wanted,” thanks in part to pandemic restrictions.

The duke’s family fled his birthplace in Greece after his father, Prince Andrew of Greece and Denmark, was banished from the country. He escaped Greece as an 18-month-old, tucked away in a fruit crate, and went on to serve in Britain’s Royal Navy, where he excelled and met the future queen, then Princess Elizabeth.

They first met when she was an eight-year-old bridesmaid at the wedding of Princess Marina of Greece and Denmark and Prince George, Duke of Kent. Philip was 13 at the time. They were engaged by 1947 and married that same year, followed by 73 years serving their country side-by-side.

It was all in the details

The Duke of Edinburgh planned his own funeral. Every single detail, from the songs to the vehicle that carried his casket to St. George’s Chapel, was handpicked by him. His extra-long, military green Land Rover was 16 years in the making, designed by him. Known to dislike a fuss, he opted for a scaled-back, but still-ceremonial royal funeral.

Regiments with a special relationship to The Duke of Edinburgh form up in the Quadrangle at Windsor Castle.

Military bands play music including ‘I Vow to Thee My Country’ and ‘Jerusalem’. pic.twitter.com/Pak2TqVW8v

About 730 military personnel, including cadets and navy, gathered on Windsor’s Quadrangle. Military musicians played his choice of hymns, including “Jerusalem” and “I Vow To Thee My Country”. Members of royal staff were there, too, as was his carriage, pulled by two gorgeous Fell ponies, which sat next to the quadrangle, his cap and gloves sat atop the driver’s seat.

Members of the Royal Marines were the pallbearers, carrying his casket as it emerged from Windsor Castle and was placed on top of the Land Rover, and driven to St. George’s Chapel. His casket was draped in a flag representing various aspects, split into quarters, of Philip’s life—the top left featuring three lions and red hearts from the Danish coat of arms; the bottom right, a white cross from the national flag of Greece; the bottom left, two black stripes representing the Mountbatten family; and the City of Edinburgh, depicted by a castle, in honour of Philip’s title.

Sat atop the casket was a wreath of white flowers from the Queen, along with his naval cap and sword.

A wreath of flowers, and a note, from the Queen pic.twitter.com/UEgVccEOUr

Harry and William were separated by their cousin, Peter Phillips, the son of Princess Anne, amid the reported tension between the two following Harry and Markle’s step away from royal duties, their move to America and their recent tell-all interview with Oprah Winfrey. Markle remained at home in California with Archie, pregnant with their second child, likely watching the funeral on television. It’s believed that a custom wreath and card, handwritten by Markle on behalf of the couple, was laid in honour of the late prince outside of the ceremony.

Before entering the chapel, a moment of silence was held—only birds could be heard chirping in the background, a fitting soundtrack given the prince’s love for nature and his position as the former president of the World Wildlife Fund. 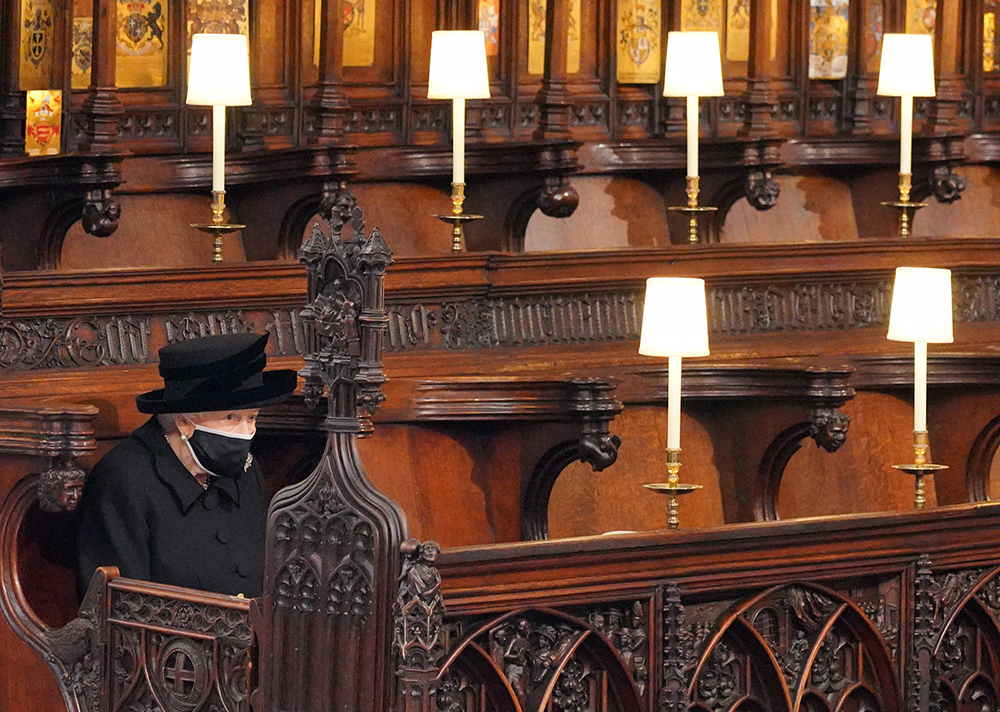 For the first time in seven decades, the Queen, who celebrates her 95th birthday next week, is without her husband. Joined only by her lady in waiting, Susan Hussey, they drove in the procession from Windsor Castle grounds to St. George’s Chapel, passing by Duchesses Kate and Camilla, without their husbands who walked in the procession behind the Queen’s Bentley.

For much of the service, songs and hymns, the Queen could be seen sitting with her head bowed, her face not visible.

The ceremony praised Philip’s loyalty to the crown

No formal eulogy was given, which royal historian Suzannah Lipscomb says is normal. His “eulogy” came in the form of readings, prayers and hymns read by Justin Welby, Archbishop of Canterbury, and the Right Reverend David Conner, Dean of Windsor. A choir of just four people, hand picked by the duke himself, sang various songs, from “Jubilate In C,” written for St. George’s Chapel at request of the late prince and “Psalm 104,” a version first sung at the duke’s 75th birthday.

Prince Philip will be interred at the Royal Vault at Windsor Castle, which was constructed between 1804 and 1810 under the orders of King George III. It’s believed he will be temporarily occupying a spot there, only to be moved upon the death of Her Majesty so they can be laid to rest together. There are many royals still buried at the Royal Vault, including Queen Charlotte, wife of George III; Prince Edward, Duke of Kent; King George III; Princess Elizabeth, daughter of William IV; and more. 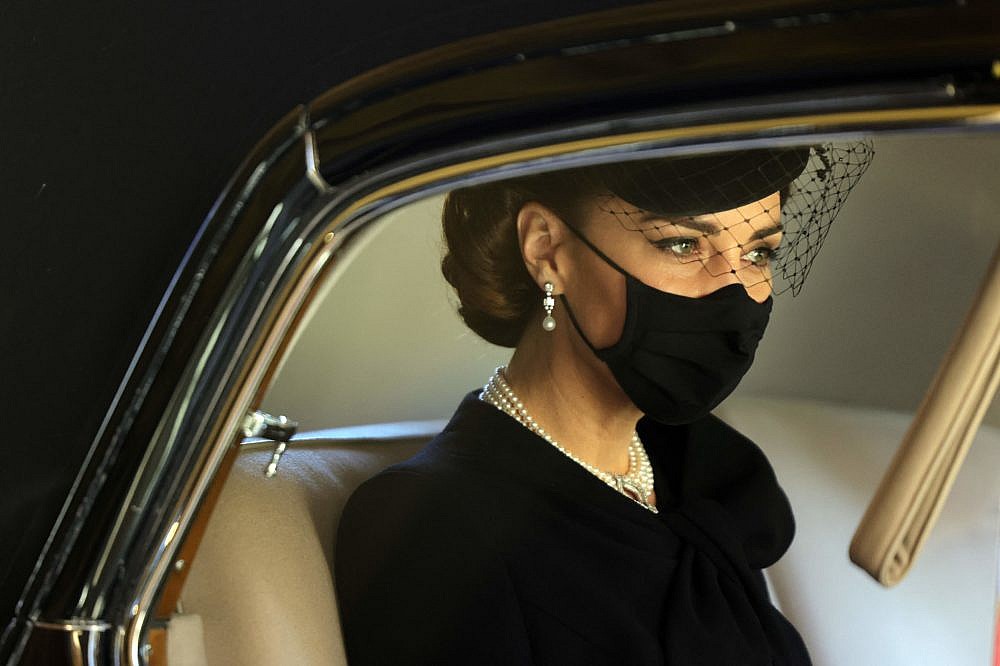 Duchess Kate paid homage to the Queen and Princess Diana

On the solemn day, Kate paid quiet tribute to the Queen and her late mother-in-law, Princess Diana. She paired her all-black Roland Mouret outfit with a three-strand Japanese pearl necklace, commissioned by the Queen and famously worn by Princess Diana in 1982 while at a state banquet in the Netherlands. She also wore diamond and pearl drop earrings from Queen Elizabeth II’s own collection.

Rumours surround Harry and Prince William’s reportedly touchy relationship of late. During CBC’s live stream of the moving ceremony, it was speculated that if anyone could bring the brothers back together, it’s Peter, with whom both the siblings both have a very close relationship.

As they left the chapel at the end of the service to the music of Bach, Prince Harry, Prince William and Duchess Kate were seen chatting and walking together, shoulder to shoulder, the opposite direction of the way the procession came.

The Duke & Duchess of Cambridge and Prince Harry walk back to Windsor Castle together #PrincePhilipFuneral pic.twitter.com/PN1ko1NRzR

The Royal Family has requested privacy as they grieve the loss of such an important figure in their lives. The Queen’s upcoming birthday on April 21 will likely be pared down and private. She usually celebrates her birthday again in June for Trooping the Colour, which is cancelled this year.