After a disastrous BBC interview that led many organizations to cut ties with him, he is a royal on the rocks. 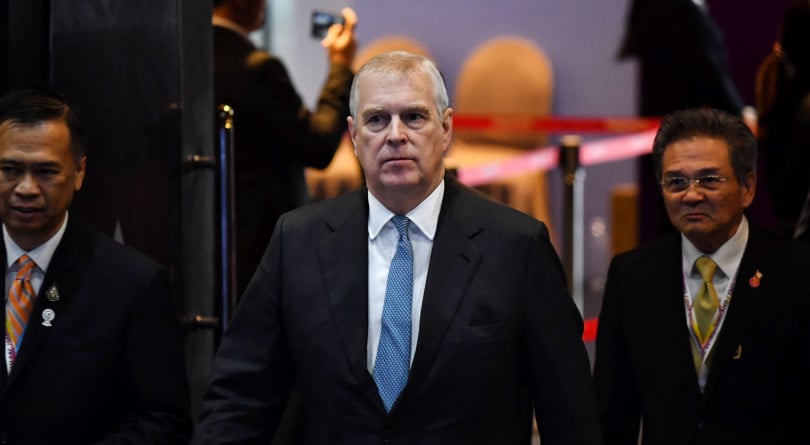 Prince Andrew, Duke of York, arrives for the ASEAN Business and Investment Summit in Bangkok on November 3, 2019, on the sidelines of the 35th Association of Southeast Asian Nations (ASEAN) Summit. (Photo by Lillian Suwanrumpha/AFP via Getty Images)

Four days. Well, 93 hours, to be precise. That’s the time from when Prince Andrew, Duke of York, appeared in a breathtakingly awful interview on his relationship with convicted pedophile Jeffrey Epstein on BBC’s Newsnight to Buckingham Palace putting out a statement by the prince announcing that he was stepping back from public duties “for the foreseeable future.”

Those 93 hours were marked by a growing tornado of controversy and scandal that had all but destroyed the public persona of the Queen’s second son and was now threatening the House of Windsor itself. Sometimes even a second-hand connection was still toxic: telecom giant BT stopped its involvement in iDEA, a charity which helps young people develop work skills, because Andrew is its patron.

Today, the Rideau Hall Foundation, one of the main partners in the Canadian arm of Andrew’s highly successful Pitch@Palace entrepreneurial program, issued a terse statement that its agreement was “coming to an end, and it will not be renewed for 2020.” Others were stripping the Duke of York’s name from their websites.

The questions weren’t confined to Andrew, who is eighth in line to the throne. During last night’s election debate, a query about whether the monarchy was “fit for purpose” had Labour leader Jeremy Corbyn stating that it “needed improvement,” while Prime Minister Boris Johnson offered support to the institution while avoiding talking about current members. Being dragged into politics, especially a contentious election, was the last thing the Queen and other senior members wanted. As Peter Hunt, a former royal correspondent for the BBC, noted: “Royals can be ruthless when they need to be—especially when the alternative is the risk of a public debate about the merits of monarchy.”

The decision likely involved not just the Queen but also Prince Charles, who is currently on the other side of the world on an official visit to New Zealand. In the end, Andrew had only one option left open to him: He issued a statement saying:

“It has become clear to me over the last few days that the circumstances relating to my former association with Jeffrey Epstein has become a major disruption to my family’s work and the valuable work going on in the many organizations and charities that I am proud to support.

Therefore, I have asked Her Majesty if I may step back from public duties for the foreseeable future, and she has given her permission.

I continue to unequivocally regret my ill-judged association with Jeffrey Epstein. His suicide has left many unanswered questions, particularly for his victims, and I deeply sympathize with everyone who has been affected and wants some form of closure. I can only hope that, in time, they will be able to rebuild their lives. Of course, I am willing to help any appropriate law enforcement agency with their investigations, if required.”

The wording of the three-paragraph press release contains more sympathy for Epstein’s victims, many of whom were underage, than he expressed in that entire hour-long grilling. Pretty much every metaphor imaginable had been used to describe the horribleness of Andrew’s answers and demeanour during that clinical dissection by journalist Emily Maitlis. “A plane crashing into an oil tanker, causing a tsunami, triggering a nuclear explosion-level bad” was a favourite. Andrew’s arrogant responses—“no” and “I don’t recall” interspersed with seemingly incredulous alibis including a pizza party and an inability to sweat plus the convenience of staying in the mansion of a sex offender while in New York, a city not lacking in accommodation—didn’t tamp down the scandal as he expected, but instead exploded it.

Media sources in Britain all but abandoned the election in order to cover every aspect of Andrew’s scandal. As a sign of how massive it was, the Daily Mail devoted the first 11 pages of one issue just to the Andrew-Epstein affair. “If this interview told us anything, then it is that this entitled, over-pampered prince has not got anyone around him who is willing or even able to tell it like it is: the interview was a disaster and he has now become a national embarrassment,” wrote Camilla Tominey, associate editor of the Telegraph, in its weekly royal newsletter. Certainly, at least one member of his immediate family had no qualms about defending him. Sarah, Duchess of York, his ex-wife with whom he shares a home, tweeted just before the interview aired, “It is so rare to meet people that are able to speak from their hearts with honesty+pure real truth, that remain steadfast and strong to their beliefs. Andrew is a true+real gentleman and is stoically steadfast to not only his duty but also his kindness + goodness.”

As Tominey noted, the next day he reportedly told his mother, Queen Elizabeth II, 93, “who was made aware of the interview but did not approve it—that it was a case of ‘mission accomplished’ and that the criticism would now end.” That aggressively positive spin ended today. Andrew, 59, may be one of the hardest-working Windsors, regularly completing more than 400 engagements a year, but all that is now in the past. While he phrases his “step back from royal duties” as temporary, it’s hard to imagine how such a damaged royal could ever again undertake engagements such as attending Commonwealth Day observances with the rest of the royal family at Westminster Abbey or presiding over a parade of Air Cadets.

For the Queen, who has never granted an interview and who was already 68, past the usual age of retirement, when the first public Internet browser was created, the social media-fanned immolation of her second son must be shocking. Yet she is not one to dwell on messy personal feelings, certainly not when there are duties to perform. Less than two hours after Buckingham Palace issued that statement, she was out in public at a long-planned event, handing out the Chatham House Prize to environmentalist David Attenborough. Some 66 years earlier, her husband, Prince Philip, wrote a letter to his former school headmaster in which he mentioned, “With Andrew around I assure you the house is far from quiet.”

The U.S. federal investigation into Jeffrey Epstein’s crimes, as well as involvement of those around him, continues. Ghislaine Maxwell, a friend of Prince Andrew, is accused of procuring underage girls for the dead financier. So the prince’s hope to draw a line under this scandal may ultimately depend on events outside the control of even Buckingham Palace.