Thirty years ago, the CBC anchor turned down a very lucrative offer to host a CBS morning show to stay in Canada. He told Chatelaine why. 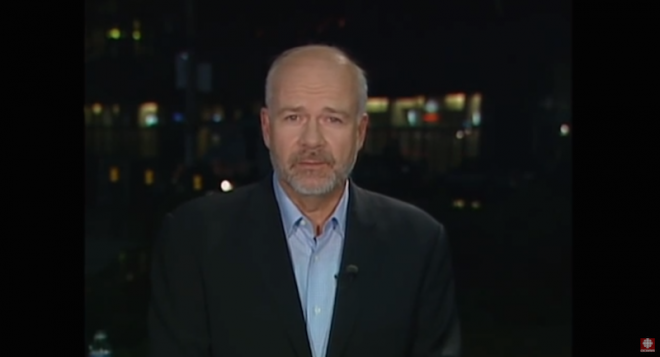 The National’s Peter Mansbridge, who brought us countless one-on-one interviews with world leaders — and invented the blackout beard in 2003 — announced Monday that he’ll hang up his blazer on July 1, 2017.

“As someone who believes strongly in public broadcasting, leaving the CBC’s flagship will not be easy,” he told viewers. “But what’s important is that The National of the future will continue to reflect our world, our country and our people.”

Mansbridge has been with CBC TV since 1972 and in his current role at The National since 1988, when he took over from Knowlton Nash (once dubbed one of Canada’s sexiest TV anchormen by this very publication). It’s hard to imagine the nightly news broadcast without Mansbridge, but digging through the Chatelaine archives, we were reminded that Canada came close to losing him once before — to U.S. network television back in the ’80s when CBS courted him as co-host for CBS This Morning with Kathleen Sullivan.

In an April 1988 profile of Mansbridge for Chatelaine (“Peter Mansbridge: Did he make the right decision?”), the esteemed writer and historian Charlotte Gray caught up with Mansbridge, then 39, to discuss his decision to turn down the CBS offer in order to host The National. 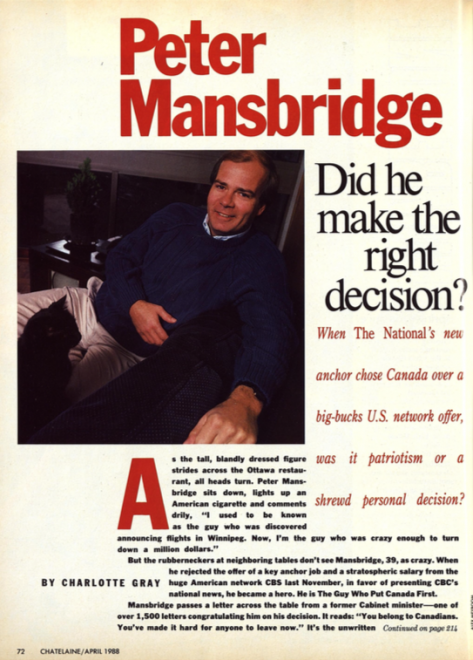 Gray interviewed the anchor over lunch just after he had joined The National. She described him as tall and blandly dressed, with a “natty padded trench coat, John Hurt charm and I’m-your-buddy style.” Mansbridge told Gray that he couldn’t believe CBS would want “a balding Canadian for such an important spot,” though the network was rumoured to have offered him $750,000 a year (and a limo, a clothing consultant and “rent allowance”) and the CBS crew felt his chemistry with Sullivan had “Ginger Rogers–Fred Astaire sparkle.”

According to Gray, Mansbridge was wary of American TV journalism. “I haven’t spent 20 years in this business to interview cooks and actresses,” he said, and decided instead to take on “the best job in Canadian journalism.” Gray reported that Mansbridge’s 10-year CBC contract was worth $250,000 a year.

As their interviewed ended, Gray and Mansbridge chatted about CBS’s decision to hire field reporter Harry Smith, known then for his “Travels with Harry” segment on CBS Evening News with Dan Rather, for the This Morning gig. “The irony, Mansbridge chortles as he stubs out his seventh cigarette of the lunch,” wrote Gray, “is that the glamour-obsessed CBS finally chose a guy to partner Sullivan ‘who has less hair than I.’”