How does a multi-million-dollar commercial that's 'so tone deaf, it's William Hung' even get made? 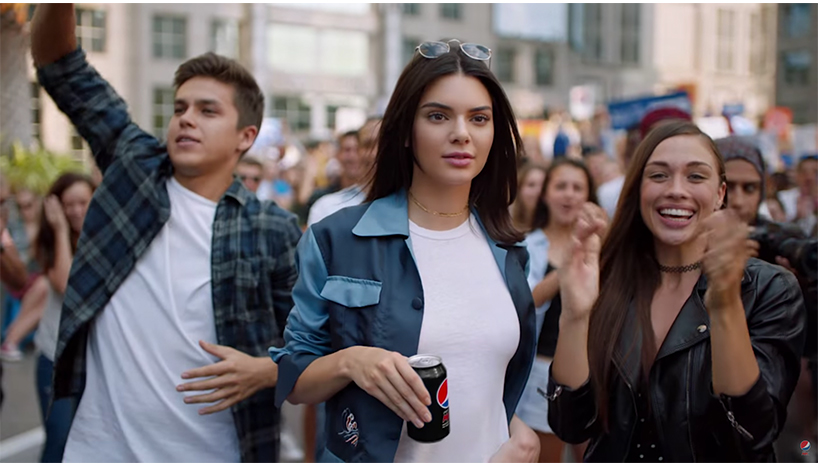 The ad, featuring Kendall Jenner, was quickly pulled after an outcry. (YouTube)

This week, Pepsi unleashed a big-budget ad fail in pursuit of its own colossal Pepsi challenge — winning over young customers. ‘Kids these days are protesting, right? Kids these days like Kendall Jenner, yes?’ was the tone of a big budget, two-and-a-half minute long ad, which featured the model joining a throng of people hoisting posters painted with meaningless platitudes. After an outcry about the ad’s insensitivity and appropriation, Pepsi quickly pulled it and apologized for any offence caused (showing particular concern for young Jenner’s feelings). The whole thing was, in sum, a hot, sticky mess that will go down as an advertising cautionary tale. Also this week, Nivea cream pulled an ad with the slogan ‘White is Purity,’ after accusations of being deaf to conversations about racial justice playing out in our culture right now. What’s the deal with these marketing companies? Are they living under a rock? Chatelaine asked Canadian marketing and trends expert Max Valiquette.

This isn’t the first time a soft-drink company has used the youth protest movement to sell sugary drinks — Coca-Cola’s 1971 ad, which aired during the Vietnam War, featuring youth of all backgrounds singing together on a hilltop, was one of the most successful ads of all time. Where did Pepsi go so wrong?

Coca-Cola didn’t try to insert itself into a place where it had no business being. Fundamentally, you just have a bunch of people who’ve moved to a hilltop and said ‘I’d like to teach the world to sing in perfect harmony, I’d like to buy the world a Coke and keep it company.’ That’s a very direct, and very legitimate, message. People were protesting and marching more then than they are now. The mistake would have been for Coca-Cola to have that take place in a march, or invent a fake march…

This didn’t just flop because we’re all more discerning in the digital age?

We’re more than a decade into the era of social media…it’s more like ‘Oh. My. God. This is monumentally terrible.’ It’s a badly constructed ad that is way too long, and way too artificial.

A lot of people point to the fact that it was made by Pepsi in-house, not by outside marketers. But does nobody at Pepsi follow social media or read the news?

It’s a great question. Obviously, I say this as an upper-middle-class white dude…this was upper-middle-class white dudes. It doesn’t mean they wrote and directed and did every part of it. It means there’s an environment that’s created where it’s very difficult to put forth any other point of view. It’s not just about ‘How do you make sure the company is full of more diverse people?’, and not even, ‘How do you make sure they’re in positions of power?’, it’s, ‘Is there a kind of power structure there that either elevates their voices or that — maybe, unknowingly but that doesn’t matter — silences those voices?’

I think many people with this bungle were like, ‘Again?’ How does this keep happening?

It’s unbelievable — an ad goes through many, many people before it’s let out into the world. But there’s group-think, we’re human beings and we make bad decisions. There’s also a challenge when you’re working on something like a worldwide brand where you’re trying to make something that works across all markets. Pepsi is supposed to be ‘the choice of a new generation,’ but it’s been losing relevance to Coca-Cola for a while now — it probably saw this as a big swing they had to take. It’s really difficult to state how monumental an error this is.

So not all publicity is good publicity?

No! This is exactly what erodes brand value and equity and it leaves your brand standing for less than it used to. And the media they booked for it, the digital work they would have done, just shooting and making the ad and everything else – we’re talking millions of dollars to make this happen. It’s hard not to feel here like this was done from a position of a kind of arrogance and it’s an arrogance that comes from thinking you are smarter than your audience.

I feel that way about even songs like Katy Perry’s ‘Chained to the Rhythm,’ which says, ‘Hey wake up, we’re all capitalist zombies!’ Doesn’t that go against her music label’s interests?

Maybe, but we’ll forgive Katy Perry because it’s music and it’s not reaching too far and it’s fundamentally dance-able. In fact, it’s a good counterpoint – and again, she was at all the Women’s March. She was involved.

So….on a scale of one to tone-deaf?

This ad is so tone-deaf, it’s William Hung. To use a nice current pop culture reference from 2004.

More:
10 spring cookbooks we want on our bookshelf
Big Little Lies and Broadchurch are changing the way we watch violence against women
Subscribe to our newsletters