What Canadian parents can learn from one Parisian dad

A viral video of a father consoling his son after the Paris attacks offers an important lesson in explaining tragedy. 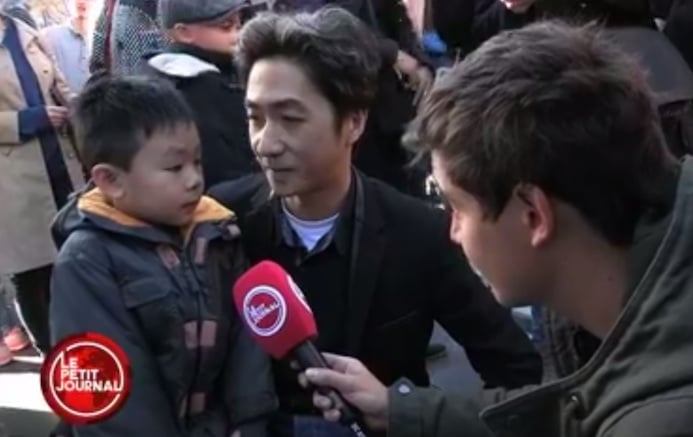 Two parents are on my mind this week. The first is a mother who lives not too far from me, in a vibrantly mixed and multicultural neighbourhood in northeast Toronto — a community of strivers, people working hard to create opportunities for themselves and especially for their kids. This mother’s children attend a local elementary school where the majority of families have immigrated to Canada; more than 70 languages are represented among the 700 students.

The mother was heading to that school on Monday afternoon to pick up her children when she was jumped by two men. They beat her, stole her cellphone and tore at her hijab, while calling her “a terrorist” and telling her to “go back home.” There was anti-Muslim graffiti nearby and it seems likely the assault and the vandalism were sparked by the ISIS bombings and shootings in Paris last Friday.

Her children didn’t see the attack but they did see the aftermath, the woman’s brother told the press. They saw their mother taken away in an ambulance, shaken, scared and hurt. The woman was released from the hospital with minor physical injuries, but her brother said that she is traumatized and “scarred for life.” When you’re a parent, there is nothing more terrifying than the possibility of not being able to protect your children, and every harm to yourself is doubled by the fear that if you’re defenseless, you won’t be able to defend your kids.

Teachers at the school are trying to comfort upset students, who range in age from about four to 12. Street-proofing tips have been sent home to families. There are many hard and painful conversations happening in this community right now. Parents are struggling to explain to children why the mother of their schoolmates was beaten up because of her headscarf. They’re grappling to balance the truth about bigotry with reassurances that bigotry might be overcome. They’re reminding their children that Canada is their home, while also acknowledging that there are people who believe otherwise.

Related: 5 ways Canadians have stood up to Islamophobia

Which brings me to the other parent on my mind, this one a father who lives in Paris. In a video clip from the French TV program Le Petit Journal, which has gone wildly viral, the father squats with his arm around his young son. They are near a memorial spot where people have brought flowers and candles to honour those killed and injured in the weekend’s terrorist attacks.

The boy, perhaps a little older than toddler-aged, says he’s scared about “bad guys with guns.” The dad replies, “They might have guns, but we have flowers.” The kid isn’t convinced: “But flowers don’t do anything.” The dad counters, “Of course they do. Look, everyone is putting flowers.” The son begins to visibly settle. “It’s to protect?” he asks. “Exactly,” says his dad.

The exchange is powerful and it ends with a heart-melting look of pure love between the two. There are no prescriptions for how to handle moments like this, and the dad is exceptionally — enviably — adept. He is wholly present and perfectly attuned to his child, aware of his little boy’s particular capacity and needs. The father allows for the existence of both bad guys and good ones. Flowers might not defeat guns, but empathy and love can win out over cruelty and hatred.

There was something else the Parisian father said, however, that made me think of the mother in Toronto, two parents in different parts of the world affected by the same tragedy. It was this: The little boy says that the family will now have to be careful and will need to change houses. “We don’t need to move out,” his dad tells him. “France is our home.”

The father and son are Asian — a fact only worth mentioning because I wonder if it had some bearing on how the father shaped his reply. The wording seemed to me deliberate: He didn’t say, “Our house is safe” or “The bad guys won’t find us.” He said, “This is our home,” as if that fact might be called into question. The far right was already on the rise in France, sowing racist, anti-immigrant, anti-Muslim and anti-Semitic sentiment. I wonder if the dad had seen, or was anticipating, the way that some have responded to the attacks with xenophobia and suspicions about visible minorities, with sharp distinctions drawn between “us” and “them,” with demands to shut borders and scrutinize citizenships, with calls for certain kinds of people to go back where they came from.

The father seemed to be telling his son that when faced with extreme, senseless violence we should not despair, and we should not be displaced — either by the terrorists or those who fight them. It isn’t enough to be safe and protected. We must also feel at home.

More columns by Rachel Giese:
Why the Liberals need to get the MMIW inquiry right
Justin Trudeau’s new cabinet is a dream team — and here’s why
Forget the boys’ club — it’s time to make our own