Moving away is no solution for the people of Attawapiskat

Jean Chrétien and others have suggested residents of the Ontario First Nation community abandon it. 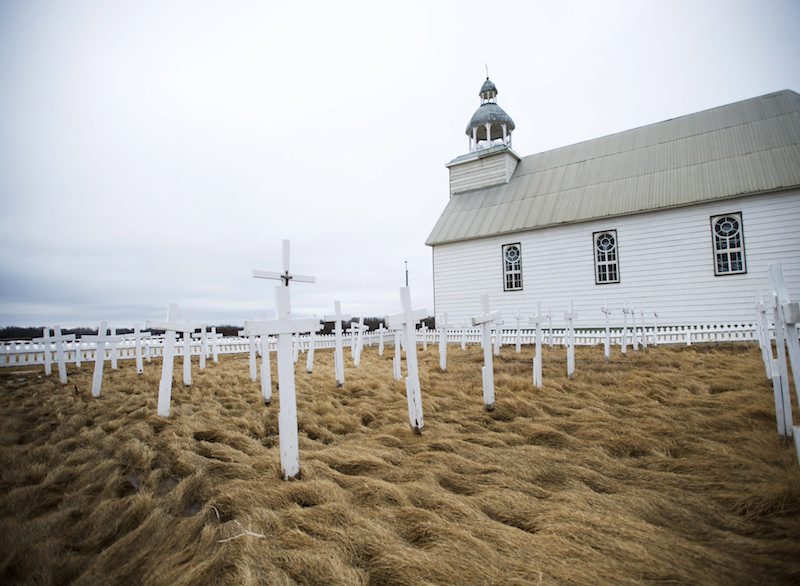 A cemetery in Attawapiskat. Photo, The Canadian Press/Nathan Denette.

Over the last two weeks as a state of emergency has been declared in Attawapiskat, Ontario, a Cree community on the coast of James Bay, my thoughts keep turning to Shannen Koostachin. In 2008, when Shannen was in grade eight, she went to Ottawa with some of her classmates to ask Indian Affairs minister Chuck Strahl to honour the government’s promise to build a new elementary school in Attawapiskat. The old one had been closed in 2000 due to contamination from a diesel fuel leak and ever since children had to attend classes in freezing cold portables infested with mould.

Shannen was passionate, eloquent and undaunted in her battle for equal access to education for indigenous children. A new school was eventually built in 2014, but Shannen died in a car accident four years earlier and never got to celebrate her success. Her spirit, though, and her fight lives on in the young people of her community who have stepped up in the days following a series of suicide attempts. Even though many of them are in a great deal of pain — 13 children and teens appear to have been part of a pact to kill themselves — it’s the younger members of the community who are among the most committed to its survival. They’ve spoken out in meetings and through social media about the problems they want addressed: bullying at school, overcrowded homes, limited employment opportunities and inadequate support to help parents and grandparents who are traumatized by the abuse they suffered in residential schools.

Like Shannen, these young people are smart, thoughtful and politically engaged. They’re also, quite rightfully, angry. “Tell me why we First Nations we live in Third World conditions,” a young man asked Indigenous Affairs Minister Carolyn Bennett. “Why is it so easy for the government to welcome refugees and offer them first-class citizenship in our country? When will Canada wake up and open its eyes to First Nations communities?”

This anger reflects disappointment and frustration as well as a love of their home. That love, alongside their optimism and determination, is a side of Attawapiskat that can get lost among the stories of despair and neglect. And it’s a side that must be heard when some, like former prime minister Jean Chrétien, Maclean’s columnist Scott Gilmore, The Walrus’s Jonathan Kay and the National Post’s Christie Blatchford, believe that residents — particularly children and young people — should abandon Attawapiskat and make a new life elsewhere.

As Chrétien put it, “There is no economic base there for having jobs and so on. And sometimes they have to move, like anybody else.” The relocation suggestion carries a tone of condescension and blame, as though the struggles of the people in Attawapiskat were due to their own stubbornness, rather than the result of a centuries-old system of policies and laws created to appropriate their traditional lands, disenfranchise them, limit their economic opportunities, break up their families and destroy their languages and cultural practices. In the Ottawa Citizen, Chelsea Vowel points out that, reserves “were never intended to be viable communities, and the fact that they continue to operate as designed is no fault of Indigenous Peoples. Despite these worst-laid plans, our communities are also sites of resilience and strength, places where our cultures and languages continue to exist.”

Chrétien knows this history, of course. He is the father of an indigenous son and was minister of Indian Affairs from 1968 to 1974. More troubling is that he seems to have played a role in perpetuating the trauma that underlies the current state of emergency. According to a report this week from APTN News, evidence of abuse at St Anne’s Indian Residential School in Fort Albany, Ontario — where many children from Attawapiskat were sent — was either ignored or buried during the period that Chrétien was Indian Affairs minister. Even among the widespread horrors of residential schools, St. Anne’s stands out: Children were raped, forced to eat their own vomit and were punished with shocks from a homemade electric chair.

Given what happened to the young people of Attawapiskat when they were removed from their homes on Chrétien’s watch, is it any wonder that these new calls for relocation are met with distrust?

Moving away is no guarantee of a better future — it may simply shift the same barriers and prejudice a little further south. Urban indigenous people face racism in employment, housing and education, too, and, overall, they tend to be in poorer health than non-aboriginal city dwellers. Inequality and injustice aren’t fixed by changing a postal code.

The young people of Attawapiskat did not create the current crisis but they have repeatedly shown tenacity, hope and resilience in the face of it. A group of them gathered recently to brainstorm solutions. None of them suggested moving. Instead, on the list of what they needed to do to help themselves and their community was the following: “work together, take responsibility, fight for what we want and need, and never give up.”

More columns by Rachel Giese:
Men freak out at the idea of being a (virtual) woman
Rampant cosmetic CGI use in film isn’t just retouching — it’s fraud
How a gender reversal in fat-shaming reveals its absurdity