The Duchess of Sussex visited the Downtown Eastside Women's Centre. 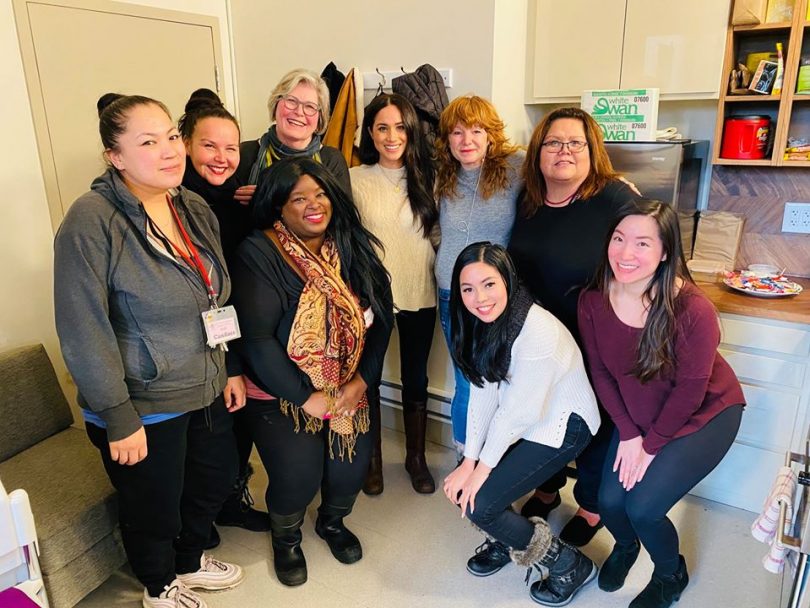 Meghan Markle was reported to have returned to Canada last week after she and Prince Harry announced they would step down from their senior royal roles, and she made a surprise visit to a women’s shelter in Vancouver on January 14.

The Duchess of Sussex visited the Downtown Eastside Women’s Centre, where she reportedly spoke to staff about issues affecting women in the neighbourhood. Markle had been spotted at Victoria’s airport earlier in the day, where she boarded a seaplane bound for Vancouver, according to the Vancouver Sun.

The centre, which is a drop-in centre and emergency night shelter, posted a lovely group photo Meghan took with some of the staff there on its Facebook page.

The Downtown Eastside Women’s Centre works to to provide women in the area with “basic needs including nutritious meals, laundry, showers, phone and computer access, and clothing, as well as support services including advocacy, housing outreach, HIV case management, Chinese seniors outreach, victim services and skills development,” according to the page. It also serves up to 500 meals every day and its kitchen provides 182,500 meals every year.

“I thought she was really down to earth,” Kate continued to the CBC. “She’s very good at sort of picking something up from the conversation and expanding that a bit and asking questions and empathetic. She was really great.”

There are more than 2,200 people who are homeless in Vancouver, according to the City’s most recent data from March 2019. Of those, 614 people were living on the street, while 1,609 people were living in “sheltered locations, including emergency shelters, detox centres, safe houses and hospitals, with no fixed address.”

Markle has a long history of volunteering with shelters in Canada. While she lived in Toronto and worked as a cast member on Suits, she regularly helped out at the St. Felix Centre, a non-profit that offers services to homeless and underhoused people. In December, Meghan and Harry selected the centre as one of 12 charities they wanted fans to support over the holiday season. St. Felix responded by posting an unseen photo of the duchess volunteering in its kitchen while she lived in the city.

According to the website of the Fred Victor Centre, one of Toronto’s largest shelters located in the east end of its downtown, more than 9,200 people are homeless in the city “on any given night.”

We feel very grateful and honoured to have been highlighted by the Duke and Duchess of Sussex, Prince Harry and Duchess Meghan Markle, as one of 12 charities doing important work worldwide. This photo has Meghan volunteering in our kitchen!. The couple said: “With the festive holiday season upon us, it’s also a reminder to reflect on those in need – those who may feel lonely, hungry, homeless, or may be experiencing the holidays for the first time without loved ones. It’s an important time of year to help those around you who may be less fortunate, or who would appreciate even the smallest act of kindness. Continuing our monthly tradition of highlighting accounts that do good, and inspired by the “Twelve Days of Christmas” – we have selected twelve organisations caring for those in need – especially at this time of year.” . Meghan Markle was an active supporter and volunteer of St. Felix Centre during her time living in the city while working on Suits. She volunteered on a regular basis in our kitchen as part of our Community Meals Program. The Duchess also donated food from the set of Suits, and on one Thanksgiving she brought in all the food, turkeys and the fixings for over 100 people. . Through our Twitter account we responded to the announcement: “Thank you! Many people here have fond memories of Duchess Meghan volunteering with us – though we remember her just as ‘the lovely Meghan’. We’re happy to see she continues supporting vulnerable people now as a member of the Royal Family. We’d love for her to visit us again one day.” . Thousands of people have responded to the call to visit our social media platforms, many of them urging people to make a donation to our Lighting the Way Christmas campaign. . Many vulnerable people in our Toronto need your support! If you are planning your holiday giving, please consider making a donation to our Lighting the Way campaign – link in our bio. Your support can make all the difference! . #Toronto #stfelixcentre #homeless #charity #harryandmeghan #sussexroyal #meghanmarkle #volunteer #lovetoronto #blogto #curiocitytoronto #hypetoronto #libertyvillage #queenwest #toreats #tdot #6ixgrams #torontolife #igerstoronto

The centre, which also runs drop-in programs and a 24-hour respite program, also pointed out another extraordinary act of kindness from Markle.

“The Duchess also donated food from the set of Suits, and on one Thanksgiving she brought in all the food, turkeys and the fixings for over 100 people.”

On Jan. 13, Canadian Prime Minister Justin Trudeau told Global News he’s supportive of the Sussexes spending more time in Canada, though there are still more issues to sort out with regard to what that looks like, who will handle their security and more. He said Canadians have a “general feeling of appreciation” for Harry and Meghan.

British Columbia Premier John Horgan agreed with him on Jan. 14.

“If they want to come back and put down roots here, I’m sure I can find something for Harry to do,” he said, according to CTV News.