The National host's sit-down with Jian Ghomeshi's lawyer wasn’t just a missed journalistic opportunity, it's a symptom of a deeper rot. 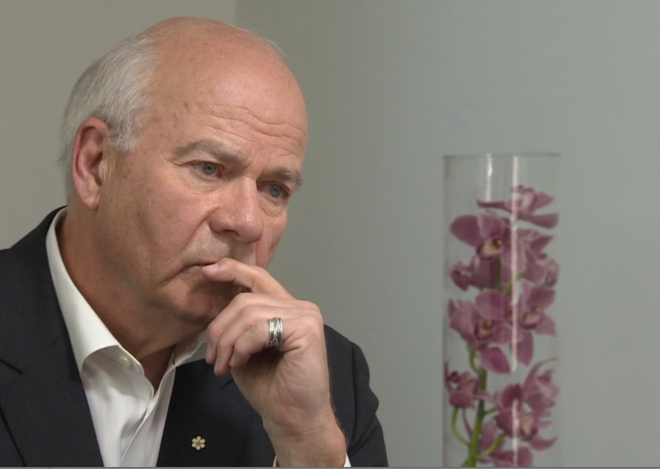 Is Marie Henein a traitor to her gender for taking on — and winning — the sexual assault case of Jian Ghomeshi?

This is a rhetorical question and a silly one at that. As anyone with even the most glancing familiarity with our legal system knows, there are thousands of female criminal defense lawyers who defend male sex offenders every day for the simple reason that it’s their job. Not all of them are as high profile as Henein and Ghomeshi, but the fact that women lawyers defend accused rapists is hardly earth-shattering news. And yet this fact seemed to astonish to our country’s highest profile news anchor Peter Mansbridge, a man who has been overseeing The National since I was still watching Mr. Dress Up.

So surprising was the revelation that Henein — a person with a uterus and real woman-type feelings — might take on a case like Ghomeshi’s, that Mansbridge chose it as the main thrust of his exclusive interview that aired on The National earlier this week. He didn’t just ask the question, he stuck to it as the throughline of his interview and would not be shaken from it, not even when Henein, a woman who does not suffer fools, pointed out that it was ludicrous. She didn’t actually lean forward say “Peter sweetheart, you are embarrassing yourself,” but she might as well have. When Mansbridge began reading out random tweets accusing Henein of betraying her sex she couldn’t suppress a laugh. “To get my reaction?” she asked incredulously.

This is the same woman who defended the former Attorney General of Ontario, Michael Bryant, against charges of vehicular homicide and ensured he was cleared on all counts. Prior to Ghomeshi, Bryant’s case was the most stunning legal reversal of fortune Canada had ever seen. Henein is a powerhouse of the highest order, a woman of significant rhetorical and intellectual gifts and a dazzling advocate whose talent for eviscerating her opponents in court has earned her comparisons to Hannibal Lecter. And after all that, the main thing Mansbridge wanted to know, the thing he was burning to ask her, was whether she was bothered by a bunch of people using hashtags?

I have interviewed Henein myself, for a magazine story I did several years ago on the Bryant case — similar to this one she only agreed to talk once the case had concluded in her favour. I found her to be funny, insightful and surprisingly unguarded. She had the easy candour that comes with unflappable confidence, by which I mean she seemed so effortlessly in control she wasn’t afraid of revealing something she shouldn’t, and thus could speak as freely as she liked.

But Mansbridge didn’t even give her the chance. He appeared to be so out of Henein’s league intellectually, so incapable or unwilling to discuss the broader issues at stake, that she didn’t even bother to treat his facile line of questioning with the contempt it deserved. “I don’t feel the need to justify myself,” she said simply, flashing her glossy black and yellow manicure (a look known as “the Maleficent”).

Mansbridge could have asked her any number of fascinating questions which, despite the 30-day deadline, Henein would have been able answer. He might have pressed her for further comment on critiques of how sexual assault cases are handled in the justice system. Or asked whether she thinks that justice is actually possible without an airing of the truth? And also to what degree the guilt or innocence of her clients matters to her, if at all? How does it feel to provide a rigorous defense — but only to those who can afford it?

These are the questions I suspect any number of CBC’s journalists like Rosemary Barton, Wendy Mesley or even Ghomeshi himself, back when he was still in that chair, would have asked.

Instead, we get Mansbridge. A national treasure so deliriously insulated by his own privilege he let Rob Ford off the hook and then asked our newly elected Prime Minister if riding on a bus to work reminded him of going to summer camp.

Despite his toothless interview style, Mansbridge is viewed within the CBC as a brilliant talent, the keeper of the public trust and the holiest of holy livestock. He is also a journalist renowned for controlling the parametres of his own image and interviews, particularly high profile ones. The Henein interview wasn’t just a missed journalistic opportunity, it’s a symptom of a deeper rot. In a case that was all about sexism and institutional smugness Mansbridge somehow managed to unwittingly reinforce both. And no one is left laughing, except perhaps Henein with her big brain unchallenged and Maleficent manicure intact.