Here's what sparked the #RightToBareArms movement. 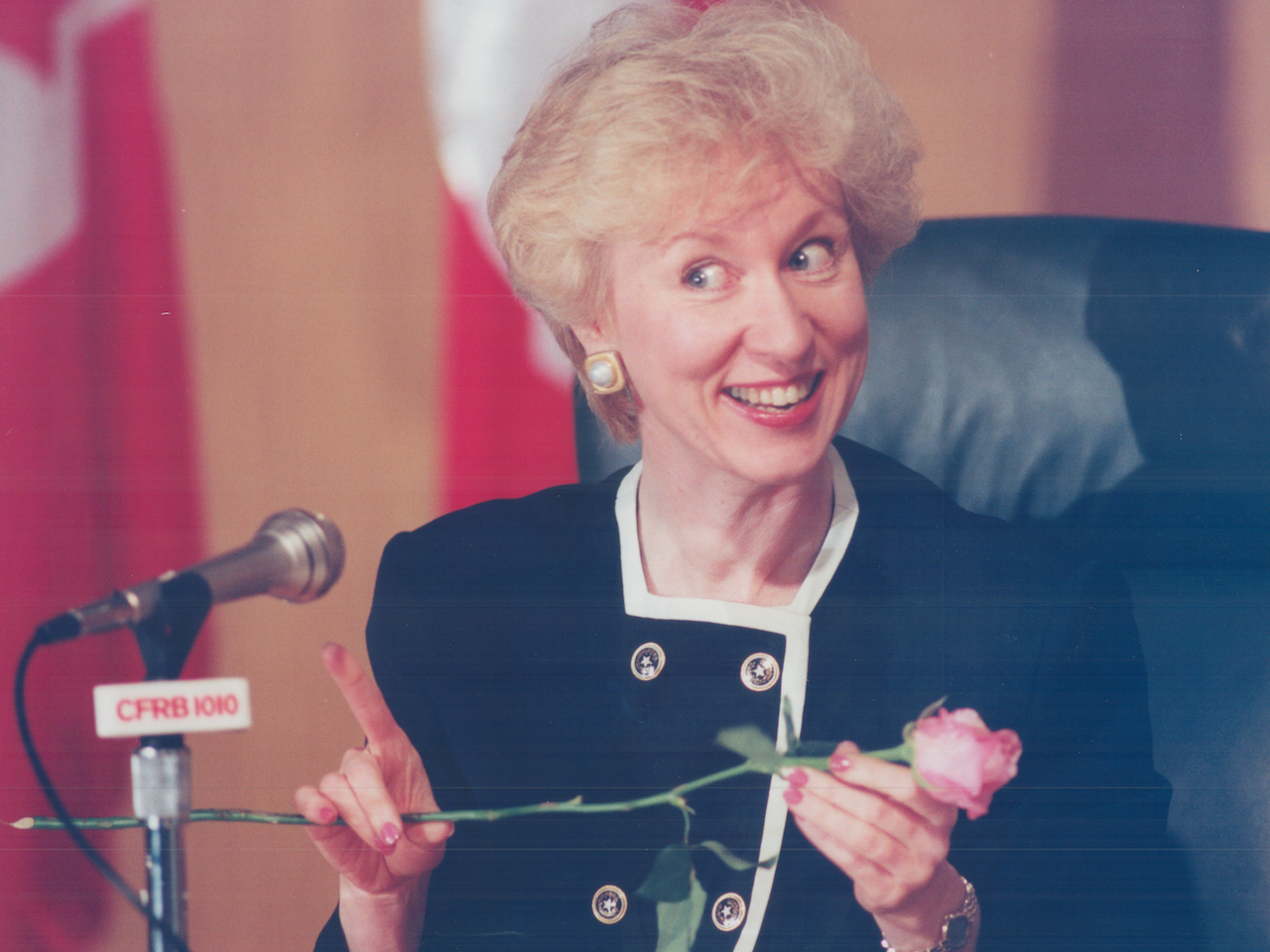 On Tuesday morning, Canada’s only female Prime Minister expressed her distaste with how some women dress in broadcast, prompting major backlash from news anchors, politicians and a bunch of regular Canadian women who like to stay cool in the summer.

I am struck by how many women on television news wear sleeveless dresses- often when sitting with suited men. I have always felt it was demeaning to the women and this suggests that I am right. Bare arms undermine credibility and gravitas! https://t.co/plBRrrtqKV

What prompted her to say that?

Campbell was referring to a blog post on what professional speakers should wear by communication coach Nick Morgan, which was tweeted out by Informed Opinions, an organization that aims to amplify women’s voices in media. Morgan’s post cited a study that suggested people are perceived as smarter when they cover up, from which he inferred that men and women should cover their arms when public speaking. But the actual article Morgan’s post linked to did not mention anything about going sleeveless in particular, and the author of the study said men were as likely to be objectified as women when exposing more skin. And one final thing  — the study wasn’t solely focused on professional perceptions. The photos used in the study to get reactions from participants included a close-up of a man’s face, then a pan-out to his naked torso, and a close-up of a woman’s face and a pan-out to her torso, where she appears to be only wearing a bra. So the comparison to a sleeveless shift dress on a nightly news show was a bit of a stretch.

What was the reaction?

A number of news anchors and others took to Twitter to refute and ridicule the former PM’s point.

On the air with the first edition of @GlobalNational And for those who care (I'm talking to you @AKimCampbell !) I'm wearing a sleeveless dress under a jacket. Not that I give a damn, because it's 2018! pic.twitter.com/JYGNN1SOhA

If ppl find 2cms of my upper arm that distracting, there are bigger issues at play for them. & as one who’s been judged based on my non ‘sleeve-related’ appearance many times, I don’t think women/men need to change to fit a standard that makes rigid folks feel more comfortable. https://t.co/AIggHjlMKV

Really? No disrespect to you @AKimCampbell, but myself and my female colleagues wear what we chose to wear with dignity, respect, and professionalism. We have shed the stereotyped female suit and are proud of it. Pants, skirt, dress, jacket #ourchoice https://t.co/Bfs3USAr1w

In a 6th grade speech I lauded @AKimCampbell for showing me that women could be anything- including PM. I must’ve missed the part about needing to wear sleeves to succeed. #barearms https://t.co/dfgjrQXYyd

I firmly believe in the right of Canadians to bare arms. https://t.co/FER9iWrR0I

Some went further, penning opinion pieces on why Campbell’s admonition in particular was so damaging, including Global News anchor Farah Nasser, who wrote: “We often tell young women that what they say matters, the work they produce matters, but the one woman who has achieved something no other woman has in our country is saying, ‘No, it is how you look that matters.’”

And then there was this…

While many accused Campbell of sexism, some tweeps also accused her of hypocrisy, reminding Campbell of her 1990 portrait by Barbara Woodley that was part of a series on Canadian women that sparked its own sexist controversy.

Despite the steady stream of criticism, Campbell stuck to her, er, guns

It is hardly sexist to care about women's credibility. This is an issue unsuited to twitter debates- that's why I rt'd the article. You are free to disagree. https://t.co/pUA7Oxf36p

With respect, I think it is a mistake. The men don't give up their jackets and wear short sleeved shirts. Have a look at the article I was sharing.

It certainly would. Airlines learned that if flight attendants are seen as primarily "sexy", passengers will not obey them in an emergency. Can be a hard balance for women. That's why I RT'd the article.

Cutting through the noise in the #RightToBareArms debate, here is the only image you need

It’s hard to refute that Michelle Obama’s official portrait, unveiled this week, puts the whole lack of credibility and gravitas thing to rest.

As a young girl, even in my wildest dreams, I never could have imagined this moment. Nobody in my family has ever had a portrait – there are no portraits of the Robinsons or the Shields from the South Side of Chicago. This is all a little bit overwhelming, especially when I think about all of the young people who will visit the National Portrait Gallery and see this, including so many young girls and young girls of color who don’t often see their images displayed in beautiful and iconic ways. I am so proud to help make that kind of history. But the fact is that none of this would be possible without the extraordinary artist and woman behind this portrait, @asherald. Thank you, Amy – it was a joy to work with you and get to know you.